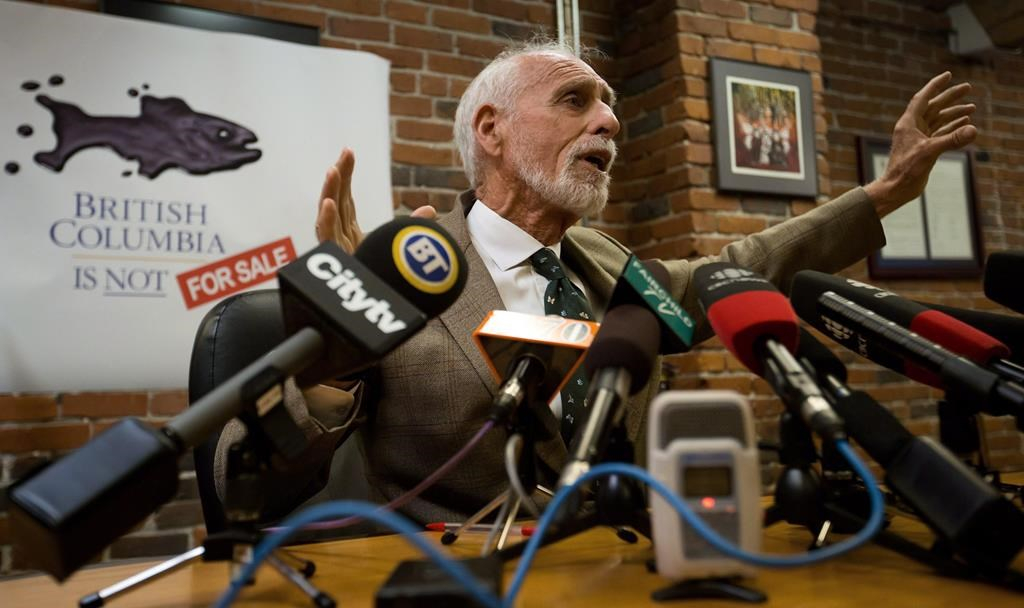 A former president of BC Hydro and a former federal fisheries minister are among 18 prominent Canadians urging the provincial government to halt work on a huge hydroelectric project in northeastern B.C.

They say an independent team of experts should determine if the problems can be resolved and at what cost.

Further construction of the dam across the Peace River near Fort St. John requires diversion of the waterway, which the letter argues could be a "costly and potentially catastrophic mistake."

Those signing the letter urge Premier John Horgan to appoint an independent panel to assess geotechnical issues at Site C and to release those findings before making a decision about the future of the dam.

At a provincial election campaign event, Horgan said diversion of the river was needed to meet the project's timelines and to stay on budget.

"BC Hydro has been working hard to make sure that we get the project in place as quickly as possible in a cost-effective way," he added.

The utility could not immediately be reached for comment.

In the letter, the group also says a panel should look at all construction costs so far, as well as the final price to complete the megaproject.

It's estimated the dam could cost $12 billion, almost double the original estimate, and the letter warns geotechnical issues "will add immeasurably to the project's ballooning costs."

A former president of BC Hydro and a former federal fisheries minister are among 18 prominent Canadians urging the provincial government to halt work on a huge hydroelectric project in northeastern B.C.

Others who have signed the open letter to Horgan include broadcaster and environmentalist David Suzuki, Chief Roland Willson of the West Moberly First Nations, economists, academics, engineers and politicians.

BC Hydro reported to the B.C. Utilities Commission in July that geological problems found late last year had created a "project risk," requiring stability measures to be taken on the right bank of the dam.

Horgan previously called that report "profoundly disappointing." A former B.C. deputy finance minister was appointed in early August and he is due to release a report in the coming weeks.

The letter says work on Site C must cease, in part because of the strain on provincial finances imposed by the COVID-19 pandemic.

"Now is not the time to be digging an even deeper financial hole on a costly project that may, given proper independent scrutiny, be found to be so structurally unsound as to be too risky to complete," the letter states.

This report by The Canadian Press was first published Sept. 28, 2020.

No plans to add conditions to Site C approval: Heyman

So one must be a "prominent

So one must be a "prominent person" to count??!!! I'd like to add my name to that list, and I believe EVERY PERSON who has ever objected to Site C counts!!!
Also, stating that Site C "must stop while geotechnical problems are explored" is only an attempt at appeasement/trying to soften the objections! No matter what kind of problems there are with this project, the WORST problem is with the environment, the future, and the injustices it perpetuates!!!

Well gosh: if Site C isn't built and damn the torpedoes, then there's no hydro power to fuel the continued gas fracking, to liquify the product after piping it west, to pipe it east to to capture the hydrogen from the methane gas in the orphaned wells ... and then there goes Mr.T's Grand Plan To Save the World.
And his campaign contributions, perhaps, from the oil and gas industries. They, after all, are the ones slated to profit, aren't they?

This is a pretty lame report.

This is a pretty lame report.

It should have included a link to the letter.

It should have outlined what the problems are and what is unknown about them.

It should have made clear that nobody seems to know whether or not the problems can be fixed at all, and, if they can, how much it will cost.

It should have told us that the project is not on budget as the Premier stated.

It should have told us that the problems have been known for decades.

It should have told us that the same kind of problems caused the collapse of the Alaska Highway bridge at Taylor just downstream from Site C in 1957.

It should have told us the historical data on large dam construction - over budget and over time. A lot.