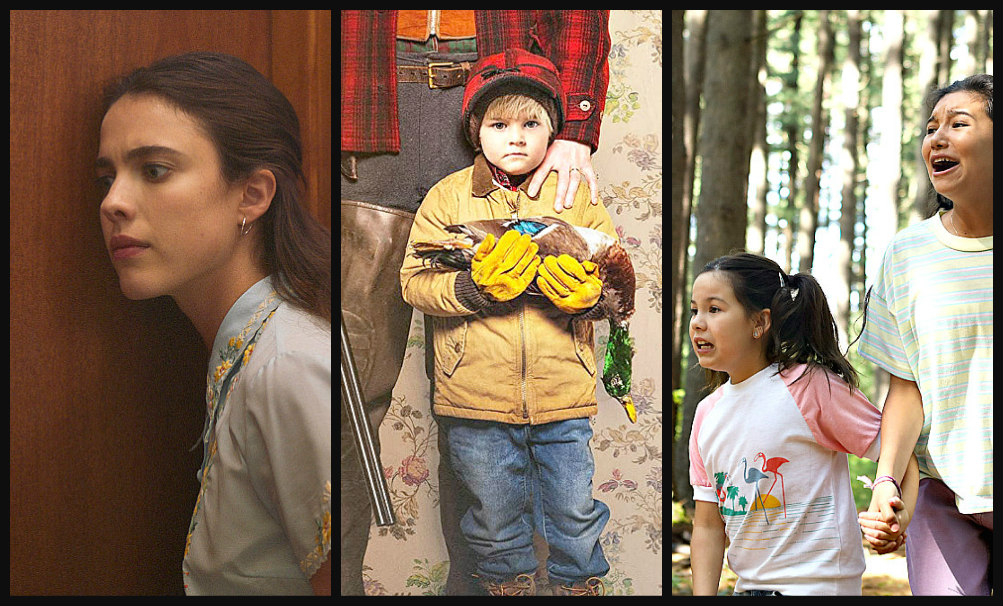 Here are five new reviews of films at the Vancouver International Film Festival. One is very good; several are close. Two are debuts by filmmakers with great promise. All are easily available through the VIFF site.

MY SALINGER YEAR: Here’s another cheerful one to fight the blues. It’s similar to The Devil Wears Prada, but set in the world of book publishing. It’s not as involving because the story is simpler, but you’ll be absorbed anyway as Margaret Qualley faces off against Sigourney Weaver. They’re at a literary agency in New York. Weaver plays the imperious boss and Margaret is the new hire put in charge of opening the many letters that arrive for the biggest client: J.D. Salinger. Her job is to make sure they never get to “Jerry,” as he’s called, and to reply to them with non-committal form letters. The story is real, taken from a memoir by Joanna Rakoff.

The boss and Joanna tangle gently over her ambitions (she hides that she wants to write, too), accepts that she’s just a “secretary,” but then takes a call from Jerry. He’s pleasant and encouraging, and she goes along to enable him to meet a publisher in Washington. The film cleverly keeps him out of view from us (behind pillars and such) and away from her. Meanwhile, she succumbs to some of the moving messages she reads in the letters to him. And she switches boyfriends. But avoids the bigger thoughts: business versus creativity, the art of writing, and fame and celebrity. It’s thin, but fun, and is likely to appeal to aspiring writers. It was directed in Quebec by Philippe Falardeau. (VIFF Connect streaming) 3 out of 5

FALLING: Viggo Mortensen’s debut as a director is an experience. It’s engrossing and emotional, with very good acting performances and filmmaking, but also a bit tiring because it repeats too much. Careful, because what it repeats is an ongoing rant by an old racist father, played with super impact by Lance Henriksen. “You voted for that negro,” he says, referring to Obama, in one of his milder comments. Many of the others are absolutely virulent, particularly his rants about gays. His son, played by Mortensen, happens to be one and dutifully absorbs the slurs and deals with the flashes of dementia they come with.

The film tries to understand how the old man came to be so bitter. It smoothly weaves in flashbacks to show son, dad and family, at a couple of different ages. They work a farm, go hunting, argue about smoking in the house and tracking in dirt. Traditional, but brittle, family life. Dad is already a bit aggressive and surly and blames it partially on his dad. The marriage breaks up and he gets worse. That progression isn’t detailed enough. Mortensen, who also wrote it, says it is fiction, though he put some memories of his own childhood into the film. It’ll resonate with many, even though the father-son break is hard to take and there’s little in the way of a resolution. It was filmed mostly just outside of Toronto and except for the two leads, and Laura Linney in a brief role, the actors are Canadian. Terry Chen of Vancouver plays the son’s husband and David Cronenberg has fun as a proctologist. (Streams at VIFF Connect and be sure to stay for the discussion that follows with the two stars and three other actors.) 3½ out of 5

BEANS: Small title, very strong film. This is a personally experienced representation of the Oka crisis that paralyzed part of Quebec 30 years ago. A town wanted to expand a golf course. The Mohawk community nearby said not on sacred ground; it’s a burial site. Before it ended, there were blockades, bridges closed, the military called in and hate expressed on both sides. Tracey Deer, who co-wrote and directed the film, was there as a 12-year-old. The film expresses the initial puzzlement she felt and gets across the fear and anger she developed. The key scene for her was riding in her mother’s car as irate locals threw rocks at the vehicle. The hate she saw that day stuck with her. I’ve seen news footage of the crisis, but not a scene like that.

The film has real impact by showing ordinary people caught up in the event. Kiawentiio, a Mohawk actor known for the CBC TV series Anne with an E, plays Tekahentahkhwa, which for convenience became Beans. She’s an amiable daughter, but cautioned to “toughen up.” The crisis does that for her, and associating with a trio of more edgy teens brings out the outrage she feels. They go on some nighttime sneaks through the woods and, in one scene, throw firecrackers at soldiers in the dark. The film is terrific in using archival footage from the time to give the context, both political (Bourassa and all) and the feelings (mostly negative) of ordinary people. (VIFF Connect) 4 out of 5

BROTHER, I CRY: Here’s a story about the ravages of drug addiction that feels absolutely authentic. I’ve heard stories just like it, including in the Vancouver Indigenous community where this is set. Justin Rain is superb as a young man on parole, working as a house painter (a job he loses because of coming in late once too often), and drawn back into the drug world. He started when he was 13 because it made him feel like he didn’t have a care in the world. His girlfriend is pregnant. The baby is likely to be born addicted. He has to borrow money from his mom. His dad berates her for always treating him like a child. He’s estranged from his sister who he blames for turning him into the police in the first place. One character tells another to stop excusing him. “He’s been changing for years. He’s an addict. They don’t change.”

The film shows his life, his sullen posture at a healing circle, his outbursts about pain, insecurity and trauma, and his dreams (like an animal in a dark meadow in one of them). There’s a strong, moody atmosphere in these scenes directed by Jessie Anthony. She’s indigenous herself, from Ontario but trained in film at Capilano University and worked events from her own life into the script. It’s her debut feature and just the other evening, VIFF gave her the B.C. Emerging Filmmaker Award. (VIFF Connect streaming) 3½ out of 5

MERKEL — ANATOMY OF A CRISIS: This one is for history and world affairs buffs only. It’s dense with information, facts and figures, but doesn’t convince as a drama. It would be better as a documentary, which it rather feels like. These are actors playing German Chancellor Angela Merkel and many politicians around her or not far away as she wrestles with the crisis of 2015. Refugees from Syria have collected in Hungary and the prime minister there is pressing them to go on to Austria. Germany would be their next step and ultimate goal. Can Germany deal with that, and at the same time deal with Greece’s financial problems? The film is crowded with events around both questions, and ultimately the overriding issue: What is the future of the European Union?

The film, by Stephan Wagner, with his background in documentaries, tries to deal with them all. And more: Politicians are pushing their own ambitions. One is manoeuvring to replace “the Teflon chancellor” played by the look-alike Imogen Kogge. An ally in her coalition government, the leader in Bavaria, is fighting a rival of his own. The film deals more with political conflicts like these than the humanitarian issues. While demonstrations are being staged calling on her to keep the refugees out and, in opposition to that, let them in, she has to deal with infighting. It’s an interesting twist. In the news, we’ve seen Merkel’s idealism. This film, drawing on a book by journalist Robin Alexander, suggests she just muddled along and caused a split in the country that still lingers. It admits that some scenes are “approximations.” Of course, especially with the many private conversations we see. And who knows what Merkel and her husband talked about when they watched TV? Bigger problem: Names and facts flash too briefly on the screen without giving us the connections we need. (VIFF Connect streaming and followed by an interview with the director.) 2½ out of 5