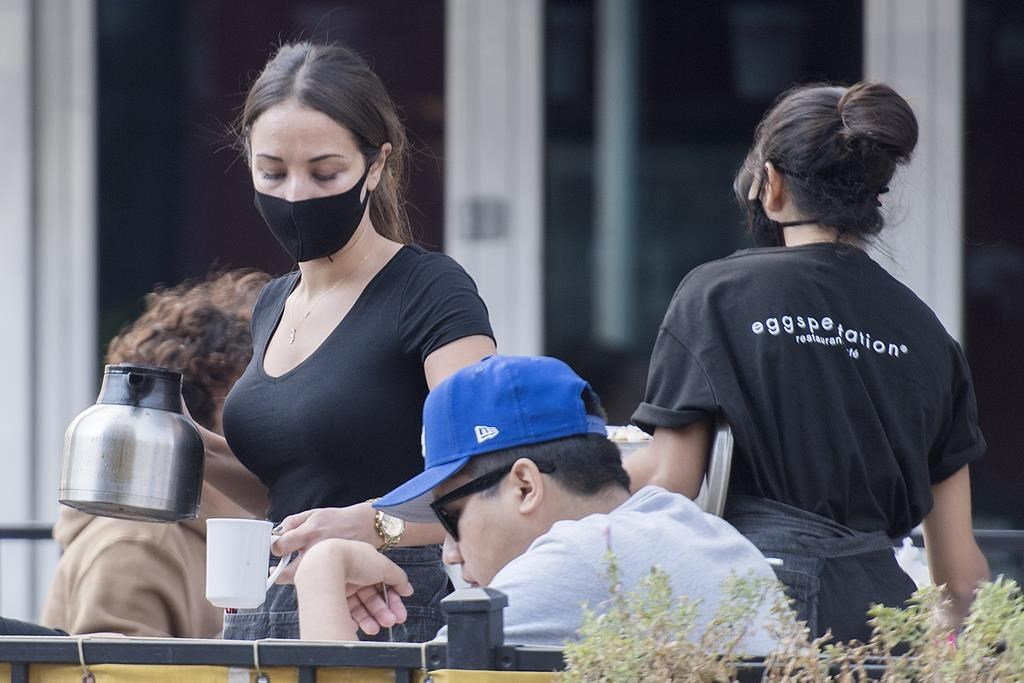 Montreal servers wore facemasks when restaurants reopened after the first wave of the COVID-19 pandemic. File photo by The Canadian Press/Graham Hughes
Previous story
Next story

Montreal restaurateurs say they don't understand why the provincial government is ordering their businesses to close even though there have been no COVID-19 outbreaks tied to the city's famed restaurant industry.

"We did everything by the book, everything right," said Martin Juneau, owner of Pastaga, a well-known restaurant in Montreal's Little Italy.

He said the members of his organization are "in shock" after hearing for days from provincial officials who said that private gatherings – and not restaurants – were the major source of rising COVID-19 cases in Quebec.

There have been no reported outbreaks and no reports of COVID-19 transmission from staff to clients in Montreal restaurants, the city’s public health director, Dr. Mylene Drouin, told reporters Tuesday.

Michael Lafaille opened a second location of his restaurant, Kwizinn, three weeks ago, an expansion that was delayed for months by the pandemic.

"We had to work overnight, long hours," he said. "It feels like it's a waste of time."

Despite working hard and playing by the rules, he feels restaurants aren't being treated as real businesses by the government.

Because his restaurant's second location is new, it won't qualify for existing rent support programs which are based on income in previous years, he said. And while takeout and delivery will help, online delivery services charge high fees that can make it hard to turn a profit, he added.

Genevieve Touchette, general manager of Le Central, said some of the 22 restaurants in her downtown Montreal food hall aren’t set up for takeout and delivery. Her business depends on downtown foot traffic and with concert halls ordered to close, she said an already bad situation will get worse.

Touchette said she doesn’t understand how closing a controlled environment – especially a large one such as the 20,000 square-foot Le Central – is supposed to help break the second wave.

Juneau said that while he expects Pastaga to survive the shutdown, some of his other businesses – a small grocery store, a wine bar and an ice cream shop – may not.

In a July survey of 580 members of the restaurateurs' association, 61 per cent said they would go out of business within six months if their outlook didn't improve, Vezina said. "Now the situation has changed for the worse."

Many restaurants have bought food they likely won’t be able to use, Vezina explained. His organization is calling on the government to compensate restaurants for those losses, and to help with cash flow and rent.

For restaurant workers, there are also fears.

Shawn Barr, who works in the kitchen at O’Thym, a fine dining restaurant in Montreal’s Gay Village, said he expects his hours to be greatly reduced.

While he’s not worried in the short-term, he said he is afraid of what could happen later on. “Even though I have faith we will survive, our fate rests in the hands of our customers."