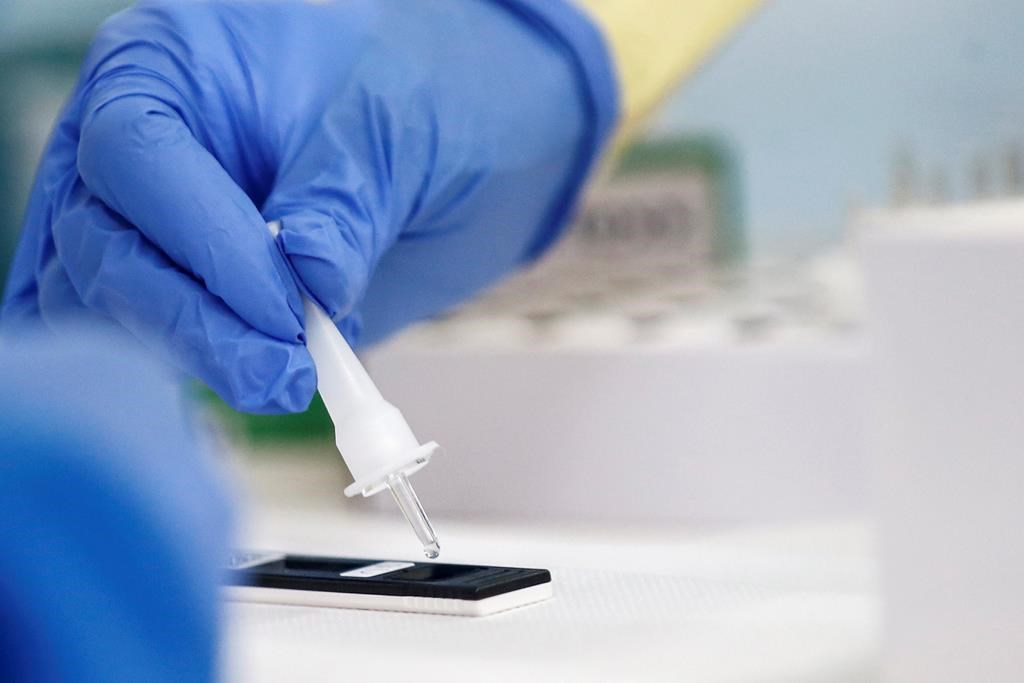 The Liberal government pushed back against criticism over a lack of rapid tests for COVID-19 on Tuesday as it unveiled a deal to buy millions of such devices from a U.S. company — whenever Health Canada approves them.

Canadians across the country have been forced to wait days to find out if they are infected after being tested for COVID-19, which Canada's chief public health officer acknowledged Tuesday as a reason for concern.

"It absolutely is worrisome because if you have a significant backlog and people don't get their test results for a number of days, you've now lost time for doing the contact tracing," Tam said at a media briefing in Ottawa.

"That can accelerate the spread. So it is something we really must all work together and try to reduce as quickly as possible."

That came as the number of positive cases across Canada continued to increase, with more than 500 in Ontario and nearly 800 in Quebec alone. Authorities in Montreal and Quebec City went to their highest alert level while Ontario Premier Doug Ford faced calls for a tightening of COVID-19 restrictions.

Rapid tests that can produce results in hospitals, nursing homes, schools and even homes have come to be seen as one way to prevent the spread of COVID-19 as the world waits for a vaccine.

While Health Canada approved one test last week that doesn't need a lab, the device still needs about 90 minutes for a result and involves a portable unit. The focus for many has instead been on what are called antigen tests, which have been described as similar to a pregnancy test when it comes to speed and ease of use.

Other countries have already approved rapid antigen tests, with U.S. President Donald Trump on Monday announcing plans to buy and distribute 150 million units of one rapid test in the country. The World Health Organization has also reached an agreement to supply 120 million tests to developing countries.

Yet the number of approved antigen tests in Canada currently sits at zero, with officials warning that approving a device that does not produce accurate results can actually spread of COVID-19.

The Liberal government pushed back against criticism over a lack of rapid tests for COVID-19 on Tuesday, September 29, 2020, as it unveiled a deal to buy millions of such devices from a U.S. company — whenever Health Canada approves them.

Prime Minister Justin Trudeau defended federal regulators on Tuesday as the Conservatives blasted the government for the lack of antigen tests and called on the Liberals to step up their efforts.

"Medical experts will make the determinations that are best for Canadians," Trudeau told reporters after co-hosting a United Nations conference to raise money for COVID-19 relief efforts in developing countries.

"On the political side, as much as we'd love to see those tests as quickly as possible, we're not going to tell our scientists how to do their job and do that work."

Even as Trudeau defended the lack of tests, Health Canada was unveiling its first-ever guidelines for companies hoping to get their antigen devices approved by the regulator. The federal procurement minister also announced a deal to purchase 7.9 million such tests once they are sanctioned.

The new guidelines state that a device must be at least 80 per cent accurate to be authorized, reflecting concerns that inaccuracies — particularly false negatives — can lead to the further spread of COVID-19. That includes five antigen tests currently under review.

Asked why the guidelines were only being published now when the rush to develop and approve a rapid antigen test has been underway for months, Health Canada's chief medical adviser, Dr. Supriya Sharma, indicated the standard was already being applied.

"We've had companies come in with submissions," she said.

"We've been looking at those submissions, we've been working with them on a case-by-case basis as we go through that process. This is a way to sort of standardize that, systemize it and put it out in a guidance document where it's publicly available."

Sharma went on to describe the effort to approve a rapid antigen test in Canada as one of the regulator's top priorities. She suggested one of the reasons some devices have been approved elsewhere but not here is because the companies behind them have not submitted them to Health Canada.

"You have to have a company that has a willingness to submit to Canada, but most importantly, has the capacity to produce those devices," Sharma said. "As soon as we're aware of a company that may be manufacturing a device and marketing it internationally … we do have staff that would reach out."

As Ottawa was inking deals for vaccine doses ahead of the inevitable global rush that will accompany the successful development of an inoculation, Procurement Minister Anita Anand on Tuesday announced a deal with U.S. firm Abbott Laboratories for 7.9 million yet-to-be-approved antigen tests.

Sharma could not say when the Abbott test, or any others currently under review by Health Canada, will be approved. The test was conditionally approved in the U.S. earlier this year before concerns were raised about its accuracy. The Food and Drug Administration reissued its approval this month.

Conservative health critic Michelle Rempel Garner accused the Liberals of having been asleep at the wheel while other countries rushed to get rapid tests into the field.

She called on Health Minister Patty Hajdu to personally lead Canada's efforts to get devices into the approval process.

"She should be out actively looking for these types of technologies and proactively getting them into the review process," Rempel Garner said

"At a time when every country in the world is proactively trying to acquire and develop these technologies to protect their people, Justin Trudeau's cabinet is content to say: 'We're letting them come to us.' Our allies are winning in this race for supplies."

— With files from Mia Rabson and Mike Blanchfield

Quite the bottomless gold

Quite the bottomless gold mine this "virus" - for U.S. manufacturing companies. Are there no Canadian manufacturers for these testing devices and vaccines?