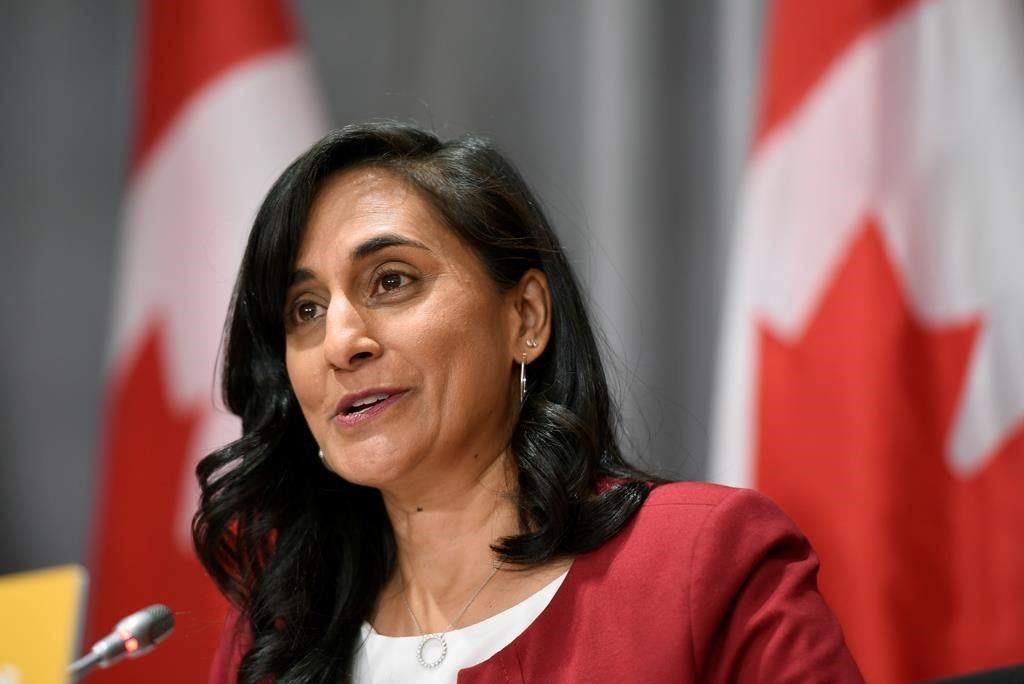 Minister of Public Services and Procurement Anita Anand speaks during a news conference on the COVID-19 pandemic on Parliament Hill in Ottawa, on Friday, Sept. 25, 2020. File photo by The Canadian Press/Justin Tang
Previous story
Next story

Health Canada has given the green light to a rapid test for COVID-19 that could be deployed to long-term care homes and schools to take pressure off provincial testing systems.

But neither the company nor the federal government will be more specific about when the test kits will start arriving other than "the coming weeks."

The department posted news Wednesday of the approval of the Abbott Diagnostics ID Now test, which can deliver results within 13 minutes of a patient being swabbed, without having to first send the specimen to a lab for processing.

The approval came a day after Public Services and Procurement Canada signed a deal to buy nearly eight million of the tests from the company, as well as 3,800 of the analyzer units that process the results.

It's not rapid enough for provinces where cases are surging and people are waiting hours in line to get tested and sometimes more than a week to get their results.

Ontario Premier Doug Ford applauded the approval Wednesday but said he wants to know when the tests will show up and when more approvals will follow.

"We would expect them to be delivered as quickly as possible," he said. "We don't have a moment to spare as cases continue to rise."

Ford said Ottawa needs to approve even more rapid tests, including those already approved in other countries such as the United States.

This is the fourth test approved by Health Canada that can be completed outside a laboratory but the first to return results so quickly.

One was taken back off the list because it didn't perform well. Another, the GeneExpert, has been used in Nunavut, Nunavik and northern Manitoba, and produces results in about an hour.

Health Canada has given the green light to a rapid test for COVID-19 that could be deployed to long-term care homes and schools to take pressure off provincial testing systems.

Health Canada approved the BCube test from Hyris Ltd. in the United Kingdom Sept. 23 but no deal to buy them has yet been made in Canada. It produces results in about 90 minutes.

The ID Now test was approved for use in the United States in the spring, and the company said in a written statement Wednesday it has already delivered 11 million of them south of the border.

"We’re pleased to bring this same point-of-care test to Canada to help slow the spread of COVID-19 in the coming weeks," the statement said.

A spokeswoman for Procurement Minister Anita Anand said 2.5 million tests are to be delivered before the end of the year to the Public Health Agency of Canada. The agency will then distribute them to provinces that need them.

The tests still need a trained health-care worker to take a swab from a patient's nose but the portable analyzer units, which weigh less than three kilograms, can be taken nearly anywhere.

They are most likely to be sent to rural and remote communities that have limited if any access to labs to test for COVID-19, or high-risk locations like schools and long-term care facilities where being able to test a lot of people quickly is effective and helpful.

They cannot be used for testing at home.

Dr. Andrew Morris, an infectious disease physician at Toronto's Mount Sinai Hospital, said it will be critical to determine which provinces get the tests first and which locations are prioritized for their use. But he said getting them at all is a good step.

"We needed them yesterday, so to speak, rather than, you know, six weeks from now," he said. "And I can't imagine that we're going to be getting them in the next couple of weeks. So on that side I am definitely disappointed and I would have liked to have seen us have had them earlier, that's for sure."

Dr. Prabhat Jha, director of the Centre for Global Health Research at St. Michael's Hospital in Toronto, said rapid tests should be used first to protect the health care system by testing health workers, and people at long-term care homes. But he said after that, rapid tests can be a big help to keeping the economy going, such as by deploying them at airports and in other key industries that need to get back to normal business.

"It's not sustainable for us to think the only tool that we have is to go back into a lockdown," he said. "That would be a complete disaster."

Why are doctors required to

Why are doctors required to swab the "nose" i.e. the sang/cerveau barrier? When certified scientists and technicians have proven that a salifa swab is effective. How many, like myself, will refuse to have the "nose" swab?