By Jacob Serebrin | News, Politics | October 1st 2020
#895 of 931 articles from the Special Report: Coronavirus in Canada 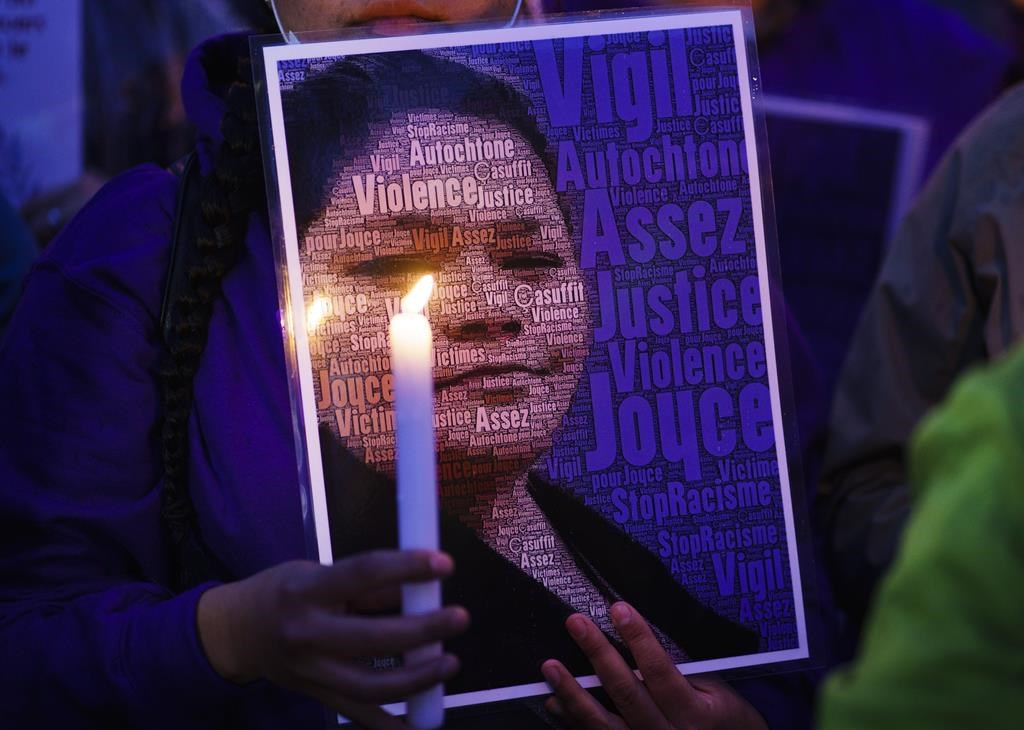 A picture of Joyce Echaquan is seen during a vigil in front of the hospital where she died in Joliette, Que. on Tuesday, September 29, 2020. File photo by The Canadan Press/Paul Chiasson
Previous story

The executive director of the Native Women's Shelter of Montreal says racism against Indigenous people is so common at local hospitals that her organization escorts clients to medical visits.

“Every time we have to bring someone to a hospital, we escort them, because we know that there will be racist comments toward them,” Nakuset, who uses only one name, said in an interview Wednesday. “We have a form because we anticipate what’s going to happen.”

That form, she said, has a checkbox for racist comments because she said they’re so common.

On Monday, Joyce Echaquan, an Atikamekw woman, filmed nurses making derogatory comments to her as she lay dying in a hospital bed in Joliette, Que., northeast of Montreal.

Nakuset said the video reveals the nurses thought they could get away with talking like that. “If Joyce didn’t have a camera, this wouldn’t be a story."

"Patients experience this every single day, to varying degrees," he said in an interview Wednesday.

The Quebec government has promised two investigations into Echaquan's death, one by the coroner, the other by the regional health centre. And while Dr. Lafontaine said those investigations are important, they won't solve larger systemic problems because these kinds of racist incidents often don't get reported, he said.

“If we're really going to fix the system, we have to not just unpack the racial events that happened, but also the reasons why this person would think that it was okay to act this way,” he said. These experiences lead people feeling disempowered in medical environments and reduce trust, Lafontaine said.

As a result, he said people won't share information with medical providers and "they may delay going to access treatment, because they need to be really, really sick in order to deal with, kind of, that level of discomfort, or hostility, and that all leads to worse outcomes."

Echaquan's death took place almost a year to the day after a public inquiry, known as the Viens Commission, released 142 recommendations aimed at improving Indigenous peoples' access to government services.

The executive director of the Native Women's Shelter of Montreal says racism against Indigenous people is so common at local hospitals that her organization escorts clients to medical visits.

The commission's report concluded it is “impossible to deny” that there is systemic racism against Indigenous people in Quebec.

Richard Budgell, professor of Inuit and northern health promotion at McGill University, says Indigenous people need to be meaningfully involved in the governance of health institutions.

“Because the only way you eliminate systemic discrimination is giving the people who have been discriminated against a role in those institutions,” he said in an interview Wednesday.

While Premier Francois Legault was quick to denounce the comments made by the nurses in the Joliette hospital as racist, he has maintained that systemic racism doesn't exist in Quebec.

Quebec's Indigenous Affairs Minister Sylvie D'Amours said Wednesday in a news release highlighting the one-year anniversary of the Viens Commission's report, that 51 of those recommendations have been adopted or are in the process of being implemented.

But Nakuset said she hasn’t seen any signs that that’s the case.

Liberal Opposition Leader Dominique Anglade called D'Amours news release insulting and said it shows she is no longer fit to be a cabinet minister.

D'Amours released another statement later Wednesday offering her condolences on behalf of the province to Echaquan's family and community.

There needs to be a large

There needs to be a large-scale enquiry into this. I'll bet there's the same discrimination around dental services. And I'll bet there is also, aside from verbal and psychological abuse, lies, blaming for system mistakes, accusations of "drug seeking", poorer delivery of actual treatment, etc.
It happens as well amongst disabled people, poor people, old people, unaccompanied individuals who appear vulnerable, etc.