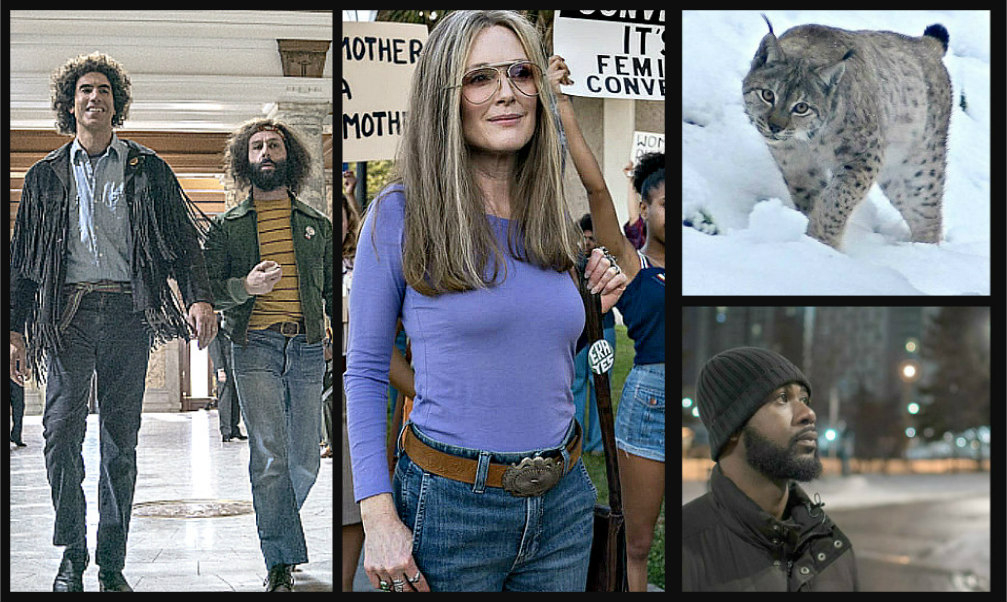 Also dramas about schizophrenia, turning off technology and time travelling to save the world.
Previous story
Next story

There have been predictions, but that scarcity of new movies hasn’t come yet. I review seven today and haven’t even been able to get to three more: On the Rocks (Sofia Coppola directing Bill Murray again), The Boys in the Band (on Netflix) and Possessor Uncut, David Cronenberg’s son Brandon’s extreme horror movie.

THE TRIAL OF THE CHICAGO 7: Two weeks before it starts on Netflix, here it is in a few movie theatres. Nineteen across Canada, three here in B.C. (West Van, Langley and Victoria). Some think it’s to tie in with our interest in the American election, although you could hardly top the shenanigans of Wednesday’s debate. I think it’s to qualify the film for the Academy Awards, where I’m sure it will be a contender in several categories. This a riveting film, with a cast of top actors at their best and terrific writing, and direction by Aaron Sorkin, who showed a deft hand with political stories on TV’s West Wing series. Here he takes us into the notorious trial that followed the police-against-demonstrators violence at the 1968 Democratic Party convention.

Looks at the names: Among them Eddie Redmayne as Tom Hayden, Sacha Baron Cohen as Abby Hoffman (depicted as far more thoughtful than we’ve imagined, certainly more than his doofus buddy Jerry Rubin), new Emmy winner Yahya Abdul-Mateen II as Bobby Seale (angry and then gagged and shackled in court), John Carroll Lynch as Dave Dellinger, Joseph Gordon-Levitt as the man ordered to prosecute them, and Mark Rylance as William Kunstler, the lawyer defending most of them. And a real standout: Frank Langella as Judge Hoffman vainly trying to keep order in his court and flinging invectives and contempt citations about. It’s a circus at times, we’ve known that, but there are a few parts of the story that were new to me. The film shows two instances where the demonstrators did provoke police. Who started the violence was a key question in the trial. And in a voir dire (without the jury present) former attorney general Ramsey Clark (Michael Keaton) testified his department concluded it was a police riot. That was not entered as evidence. You get a lot of details and legal manoeuvres, but also thrilling drama. (Three B.C. theatres now; Netflix starting Oct. 16) 4½ out of 5

THE GLORIAS: Why plural? Because it takes four actors of various ages to play feminist icon Gloria Steinem. Five actually, because she’s there herself late in the film giving a moving speech at the Women’s March in Washington in early in 2017. The film is a clear-eyed, but not preachy, chronicle of how her women’s rights fervour developed. Dad (Timothy Hutton) had big dreams and a mantra: “If you don’t know what’s gonna happen tomorrow, it could be wonderful.” On a trip to India Steinem, now played by Alicia Vikander, saw extreme examples of women unempowered, and in New York, she became sensitive to milder examples.

Writing for magazines got her only light feature assignments. She made her name by working as Playboy bunny to write about it. Later, played by Julianne Moore, she gathered a group and started her own magazine, MS, where even in the first issue they covered controversial subjects, such as abortion. She allies with important figures like Bella Abzug (played enthusiastically by Bette Midler), lawyer Flo Kennedy (Lorraine Toussaint) and Dorothy Pitman Hughes (Janelle Monáe) in marches, campaigns for an Equal Rights Amendment (still not done) and in her advocacy. The film, directed and co-written by Julie Taymor, flips around the various timelines and then uses a neat trick to connect them. The Steinems of different ages meet and talk. It works. One’s regrets draw encouraging words from another. We don’t learn much about her marriage, though, and an epic film vibe at the beginning doesn’t last and it plays more like a documentary. With lots of very good content. (Available digitally and VOD) 4 out of 5

WOLF WALK: Here’s a beautiful documentary taking us into most the remote landscapes to watch wildlife. And advocating respect and co-existence with the animals. Chiefly wolves, but not just, in this adventure by French filmmaker and naturalist Jean-Michel Bertrand. Three years ago, he brought us a film about wolves in one valley in the Alps. This time, he focuses on one aspect of their lives and has an even more taxing trek to do it.

Young wolves must leave the pack and start again somewhere else. Bertrand followed one for months and for more 300 kilometres to see how that works. It’s not easy for the animal, which must avoid areas where other wolves already live. Apparently they’re ready to kill to keep it out. It has to stay away from the increasingly expanding towns where human beings live. Cars can run them down and people have an ancient fear of, and an ongoing war on, wolves Bertrand argues passionately that it's not deserved. He follows his subject through deep snow, sets up automatic cameras where he suspects it may go next, and then shows us close-up images of wolves that come right up and sniff the lens. A camera crew follows him all the while, and we get spectacular images of the mountain trails he takes. He conveys a lot of wildlife information and a deep appeal to learn to live together. (Stream at VIFF Connect) 4 out of 5

NO VISIBLE TRAUMA: We get stories quite often from the U.S. about police killings and other overreactions. This film shows it happens in Canada, too. Alberta filmmakers Marc Serpa Francoeur and Robinder Uppal have a thoroughly researched and alarming documentary about three cases in Calgary. They say the city has more deaths by police than Chicago, New York City or Toronto. The finer details are even more shocking. A cop involved in one incident stays on the job and is involved in another a few years later. An agency that investigates such things has found reason for criminal charges in only one of 71 cases it looked at. One man who was beaten by police was described as having “no visible trauma” in the official report. Security camera footage shows a man being punched and kicked in a parking lot. One is driven away in a police car and abandoned in the cold. Another is shot multiple times in a hotel room. It’s a stunning indictment, and not our usual image of Canada. (Streaming at VIFF Connect) 3½ out of 5

SAVE YOURSELVES! Here’s another film that poses the dream some have of just switching off the phones and computers for a time and foregoing those distractions. It sets all that up and then spins a comedy that is gently funny without a great deal of import. It’s a pleasant diversion, though, as a Brooklyn couple (Sunita Mani, John Reynolds) borrow a friend’s wilderness-surrounded house to live for a week without technology. They’re game, but inept. He can’t chop wood or drive a stick shift and moans that they don’t have any skills. “Millennial softness,” one writer calls it. That’s appropriate and funny, and then the film turns a corner.

A shooting star delights them at night; next morning they have a visitor: a round furry creature about the size of a bowling ball. It doesn’t do much, at first, but back on their phones, they find out they’ve missed an alien invasion. Well, that’s what the voice message said, citing a report on Fox and Friends. “They’re taking over.” They feel the paranoia, too, face more creatures outside, find a bottle of wine useful as a distraction and try to drive off. It’s gets stranger from there, but entertains anyway. (International Village and three suburban theatres) 3 out of 5

ETERNAL BEAUTY: Since it stars Sally Hawkins, you’d probably think this is a comedy. But caution, it’s light all right, but the subject is schizophrenia, and from a couple of notes I’ve read, apparently a good depiction of it. The many scenes of Sally seemingly drifting in and out of reality look genuine to me. She is afflicted with a trauma that came on after she prepared joyously for her wedding, but the groom didn’t show up. She gets phone calls from him now and then saying he still loves her. Or, is that just her distraught imagination? There are many incidents that may or may not be anything more delusion.

Writer and director Craig Roberts worked hard, maybe too meticulously, to make it authentic. He based it on observing a friend with schizophrenia. So there are cute scenes (Sally buying her own Christmas presents and asking family members who would have bought them to pay for them) and darker ones (a scary party). There’s hope when she connects with an equally lost soul (David Thewlis, as a man with no job, but an imaginary rock band, which he says is on the verge of something). “You’re not marrying this fool,” blurts out her mom in a strong performance by Penelope Wilton. Her doctor advises a self-affirmation that I’ve never heard before: “I am in my oils.” The film does throw out this question: “What if there’s no such thing as happiness, only moments of not being depressed?” (Available digitally and video on demand) 2½ out of 5

2067: Time travel and climate change combine in this breezy science fiction adventure from Australia. And, of course, our planet’s very survival is at stake once again. This one imagines global warming so advanced that plant life is all but extinct and oxygen is non-existent. People buy synthetic oxygen from Chronicorp, but many are getting sick from it. The company wonders if people in the future have a solution, send a message and get this answer back: “Send Ethan Whyte.”

He happens to be a tunnel worker for the company (and is played by Kodi Smit-McPhee). He and a co-worker pal (played by Ryan Kwanten) are sent forward in time to investigate. The motivation for the film, drawing attention to the climate crisis, is good. Director and co-writer Seth Larney says he has thought a lot about it after a childhood where he played in the woods and streams and now worries about what we are leaving to future generations. That idea is central to what Kodi finds in the future, most of which I won’t dwell on. There is this question though: Who sent the message asking him to come? What happened to the skeleton he finds there? As happens so often these days, the normal rules of time travel stories are broken and some surprises show up. More than a bit unclear and baffling, but intriguing. (Streaming digitally at Telus, Shaw, Cineplex, Apple TV, Google Play and more). 2½ out of 5