By Christopher Reynolds | News, Politics | October 2nd 2020
#905 of 1611 articles from the Special Report: Coronavirus in Canada 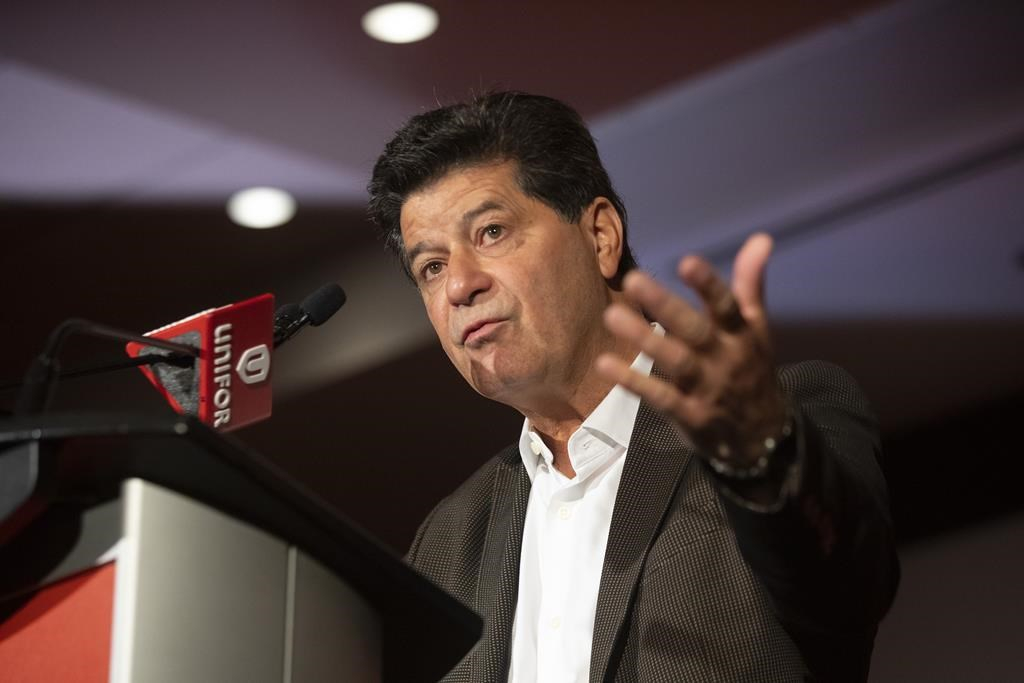 Unifor President Jerry Dias takes a question from a journalist after announcing a three-year labour agreement with the Ford Motor Company at a news conference in Toronto on Tuesday, September 22, 2020. File photo by The Canadian Press/Chris Young
Previous story
Next story

Labour leaders are calling on Ottawa to provide immediate financial aid and rapid viral testing to an airline industry devastated by the COVID-19 pandemic.

The heads of two pilots' unions and Unifor asked the federal government on Thursday to offer carriers loans totalling $7 billion at a one per cent interest rate.

The 10-year credit plan being requested includes loan guarantees and direct financial aid, but no grants and aligns with the support extended by other countries, they said.

The unions also asked Ottawa to back approval and deployment of rapid COVID-19 tests for passengers as a step toward easing travel restrictions and quarantine rules.

“The COVID-19 pandemic has created a crisis in Canada's aviation industry unlike anything seen before, and recovery may be years away," Tim Perry, head of the Air Line Pilots Association's Canadian branch, said at a news conference in Toronto.

"Make no mistake, decimating this industry today will impede the recovery for Canadians tomorrow and beyond," said Robert Giguere, head of the Air Canada Pilots Association.

Labour groups differed on the best approach to a bailout.

The Canadian Union of Public Employees, which was not a part of the media event Thursday, said any government support should include "significant carve-outs for supporting workers, rather than protecting only corporate bottom lines."

CUPE, which represents 15,000 flight attendants, also said a government stake in the companies should be a condition of any federal assistance, with parallels to Germany's $14-billion bailout of Lufthansa that saw the government take a 20 per cent share of the airline.

However, Unifor president Jerry Dias said a government stake should only come into consideration if an airline defaults on a loan.

Labour leaders are calling on Ottawa to provide immediate financial aid and rapid viral testing to an airline industry devastated by the COVID-19 pandemic. #cdnpoli

Governments across the globe have doled out $123 billion to assist the airline industry, Dias said. Canada, on the other hand, has steered clear of sector-specific support, instead rolling out financial aid such as wage subsidies available to many industries.

Ottawa has also held off on requiring airlines to refund customers whose flights were cancelled due to the pandemic, potentially saving carriers hundreds of millions of dollars. In contrast, European and U.S. authorities have demanded airlines reimburse travellers, on top of the strings attached to financial lifelines that range from limiting dividends and executive bonuses to cutting carbon emissions and carving out ownership stakes for government.

Travel restrictions and dried-up demand continue to take a toll on the airline and tourism industries. More than 30,000 employees have been laid off or furloughed at Air Canada and WestJet Airlines Ltd. Passenger numbers in Canada were down 90 per cent year over year in July, though the 845,000 travellers made up nearly twice the number of the previous month, according to Statistics Canada.

"We are in dire, dire straits. Air Canada is blowing through about $15 million a day in cash... That is completely unsustainable," said Dias, whose union represents 15,000 workers in the industry including pilots, baggage handlers and customers sales agents.

Dias applauded Prime Minister Justin Trudeau's government for extending the Canada Emergency Wage Subsidy into next summer, but noted that some carriers such as Air Canada have not signed on, leaving thousands of former employees without a steady income. Meanwhile the Large Employer Emergency Financing Facility (LEEFF), a federal program that provides loans starting at $60 million to large firms, "just isn't working" due to "incredible restrictions" and roughly eight per cent interest, he said.

In its throne speech last week, the Liberal government pledged to "support regional routes," but has provided no details.

“Unfortunately, the Trudeau government continues to leave the thousands of Canadians who rely on the aviation industry in the dark about how or if they will have jobs to return to," said Conservative transport critic Stephanie Kusie, who called the LEEFF program "broken and untenable."

NDP labour critic Scott Duvall echoed the unions in demanding that help go "directly to workers and not just a blank cheque to CEOs." Airlines should also be required to refund the thousands of passengers whose flights were cancelled as a result of the coronavirus, he said in a statement.

The National Airlines Council of Canada welcomed the plea from union leaders and backed their call for government adoption of a rapid testing regime as a critical step toward recovery, which remains in "Stage Zero," president Mike McNaney said in a release.

Air Canada — one of the council's four members — announced Thursday it has finalized an order of rapid COVID-19 tests made by U.S.-based Abbott Laboratories. The health-care company's point-of-care kits, called ID NOW tests, will be taken voluntarily by employees, Air Canada said.

WestJet Airlines Ltd. and Vancouver International Airport are also launching a project to test passengers voluntarily for the coronavirus on some departing flights, part of a broader push by carriers to show they are serious about combating viral spread as they try to coax Canadians back to the skies.

Companies in this story: (TSX:AC)

Feds look to finalize deal with airlines, but it's complicated

By Fiona Harvey | News, Politics | April 2nd 2020
Reports from the Race to a Safer World