Masks will be mandatory in some Quebec high schools

By Jillian Kestler-D'Amours | News, Politics | October 6th 2020
#909 of 1611 articles from the Special Report: Coronavirus in Canada 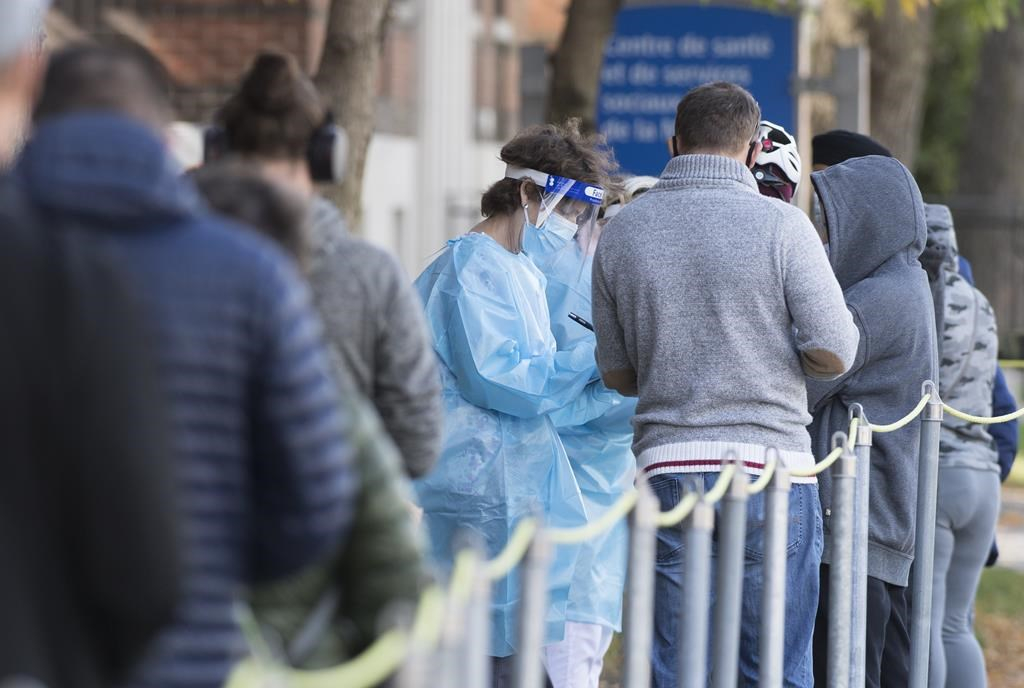 A health-care worker takes people’s details as they wait to be tested for COVID-19 at a Montreal clinic. Photo by The Canadian Press/Graham Hughes
Previous story
Next story

High school students in regions under maximum alert will be required to wear masks inside classrooms, authorities said Monday, as Quebec reported the highest number of daily COVID-19 infections since the pandemic began.

The government also ordered gyms closed and banned organized team sports in high-alert regions such as Montreal and Quebec City, starting Oct. 8 until at least Oct. 28.

Education Minister Jean-Francois Roberge told reporters Monday the new mask-wearing rule will be in effect for the same time period as the gym closures and the ban on organized team sports. Also starting Thursday, students in Grades 10 and 11 in high-alert regions will move to rotating schedules, spending one day out of every two at home.

"It's important to bring forward these new measures because we want to do everything we can to keep our schools open," Roberge told reporters.

As of Oct. 1, there was at least one active case of COVID-19 reported in 636 schools across the province, according to the government.

The greater Montreal and Quebec City areas, as well as the Chaudiere-Appalaches region south of the provincial capital, are at the maximum, "red" COVID-19 alert level. Bars, restaurants dining areas and most venues are closed in these regions, and indoor and outdoor gatherings are prohibited. All the restrictions have been imposed until at least Oct. 28.

On Monday evening, Premier Francois Legault asked Quebecers to download a federal smartphone app that notifies users if they have been in contact with anyone who tested positive for COVID-19.

Legault said he hoped the COVID Alert app would help the province reduce the number of infections and said he was satisfied with its security features. "The more Quebecers sign up, the more effective it will be."

Quebec high school students in regions under maximum alert will be required to wear masks inside classrooms. #quebeccovid #wearamask

"I know how important sports are," Charest told reporters. "The challenge we're facing right now, we all need to confront it together, and it demands sacrifices."

The Quebec Major Junior Hockey League said it was "disappointed" by the announcement, as two of its teams are in "red" zones: the Quebec Remparts, who play in Quebec City; and the Blainville-Boisbriand Armada, who play in Boisbriand, Que., north of Montreal.

In a statement Monday, the league said it planned to explain to public health authorities the "additional measures" it was imposing on those two teams. "The QMJHL is convinced that these additional measures will go above and beyond what is required to protect our players, staff and officials and enable all of our teams to continue playing."

The league also announced Monday that one Armada player tested positive for COVID-19. The Blainville-Boisbriand team and the Sherbrooke Phoenix have suspended all in-person activities, after the teams played twice over the weekend.

Quebec reported 1,191 new COVID-19 cases Monday, the fourth consecutive day authorities reported more than 1,000 new infections, and the highest single-day total since the beginning of the pandemic. The province has reported a total of 79,650 COVID-19 infections.

Health officials reported two deaths over a 24-hour period attributed to the novel coronavirus, and four that they said occurred at earlier dates, bringing the province's death toll to 5,884.

The province said hospitalizations from COVID-19 went up to 361, an increase of 27 from the previous day, with 62 people in intensive care — down two from the day before.

Roberge also announced that all extracurricular activities will be prohibited involving students who aren't in each other's classroom bubbles.

This report by The Canadian Press was first published Oct. 5, 2020.