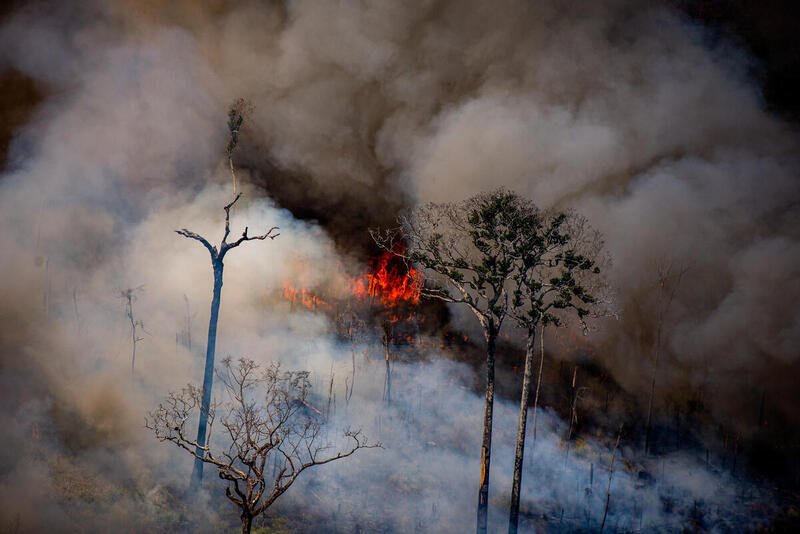 Canada is negotiating a free trade agreement with Mercosur countries, including Brazil, that would open Canadian markets to Brazilian beef and soy.

That has environmental advocates concerned that Brazilian cows — which, along with soy, are driving deforestation in the Amazon — could end up on Canadians’ plates. Cattle are a leading cause of deforestation in the country, with ranchers clear-cutting and burning the jungle in a race to expand pasture lands.

“Beef is the top driver of deforestation and fires (in the Amazon),” said Reykia Fick, nature and food campaigner for Greenpeace Canada.

Motivated by the Bolsonaro government’s anti-environment agenda, deforestation in the Amazon increased by 30 per cent in 2019, a trend that’s expected to continue this year.

The Amazon, a critical carbon sink in the global climate system, is among the most biodiverse places in the world — and the ecosystem is on the verge of a major ecological tipping point, according to a recent study in the journal Nature Communications.

The region is also home to several Indigenous nations, many of which are being violently pushed off their lands by encroaching ranchers and farmers.

Greenpeace Canada is calling on the federal government to stop early negotiations with the Mercosur trading bloc — Brazil, Paraguay, Uruguay and, until recently, Argentina — until Brazil halts its Amazonian agenda.

Brazil’s Confederation of Agriculture and Livestock, which represents farmers and ranchers in the country, estimates the agreement could increase Brazilian agricultural imports to Canada by about $10 billion. The organization estimates beef, mostly specialty cuts processed outside of Canada, would account for about a fifth of that growth.

Last year, Canada’s own $9.4-billion cattle industry produced 1.5 million tonnes of beef, almost half of which was exported to the United States and Asia.

Deforestation in the Amazon increased by 30 per cent last year. @GreenpeaceCA says beef is the top driver of deforestation and fires in the region.

“There’s a lot of unnecessary to and fro-ing of food in the world,” said Darrin Qualman, director of climate policy at the National Farmers Union.

“Until recently, we were a net exporter (of beef). We were self-sufficient and then some, yet there was still meat coming in from other places.”

That movement is not innocuous — in Brazil or in Canada.

A May 2020 report by a coalition of climate and environmental researchers found that high demand for beef and soy has led to a situation where “investors, real estate firms, and agribusinesses (are) … acquiring land, clearing it from vegetation, and transforming it into farmland.”

In Brazil, slash-and-burn — a technique in which clear-cut rainforest residue is left to dry for several months before being burned — is widely used to clear land for cattle and soy. Fires from agricultural production burned 31.8 million hectares last year, amounting to almost four per cent of the country’s total landmass.

International political and commercial pressure on both industries over the past decade has led to some reforms. Many soy producers have pledged not to use recently deforested land, a decision Fick said has pushed them onto former cattle ranges as ranchers cut deeper into the rainforest, while the multinational beef processors cornering Brazil’s market have said they don’t source from ranches on recently deforested lands.

“(Beef companies) are only monitoring at the level of the actual slaughterhouse and the primary producer,” she said.

Those findings were echoed in the May report. The authors overlaid fire location data on the catchment areas for major soy silos and slaughterhouses as a proxy to estimate the overlap between fires and agricultural supply chains.

For slaughterhouses alone, they found that the geographic area where three major companies source their cattle saw almost half the fires in Brazil last year.

Nor are negative environmental impacts of a potential trade deal limited to Brazil.

“It’s highly likely that a trade agreement (Canada and the Mercosur countries) are negotiating, if it includes anything like what’s in the CUSMA (the new NAFTA agreement), is going to have provisions that shrink the domestic policy space to address environmental problems,” said Sharon Anglin Treat, senior attorney at the Institute for Agriculture and Trade Policy.

Those restrictions can include provisions that allow multinational companies to sue national governments if they deem environmental regulations will impact their profit margins.

They can also put farmers with higher costs of production at a disadvantage and push them out of the market.

For instance, a carbon tax could increase the cost of beef production for Canadian farmers, putting them at a disadvantage relative to Brazilian competitors, explained Qualman from the National Farmers Union.

“This is despite top-line messaging (from governments) that (these agreements) are all very positive and environmental,” said Treat.

So far, all negotiations for the proposed Canada-Mercosur agreement have been behind closed doors and only minimal information on the specific terms of the pact are available, said Fick.

In an emailed statement, the office of Small Business, Export Promotion and International Trade Minister Mary Ng said: “Our government is firmly committed to the principle that free and progressive trade, and protecting the environment, should be mutually supportive.

“It has always been our priority to include … environment chapters within free trade agreements — and that would be the case for any potential future Mercosur agreement.”

The ministry clarified that no new rounds of negotiations have taken place since the massive human-driven fires that ravaged Brazil in 2019. It also said it expects to release an environmental impact assessment of the proposed trade deal “soon.”

With Brazil’s government aggressively pursuing a pro-development agenda in the Amazon driven by agribusiness, Fick said Canada should simply walk away from the table until strong environmental regulations and enforcement agencies are implemented in the country.

“(The Bolsonaro government) has basically given the message to land grabbers and ranchers that they can go right ahead and do all of this with impunity,” she said.

375,000 fire alerts in September of 1019 alone, 31 million hectares of land slash/burned, 4 percent of Brazils total landmass deforested in one calendar year. My mind is absolutely reeling.
Much of the deforestation/fire burns occurring around the sites of 3 cattle slaughter sites.
None of this is sustainable. None of this is defensible. None of this is in any way sane. It's a criminal ransacking of the Amazon.
Canada cannot aid and abet this by becoming a free market for Brazil's degenerate heedless beef trade.