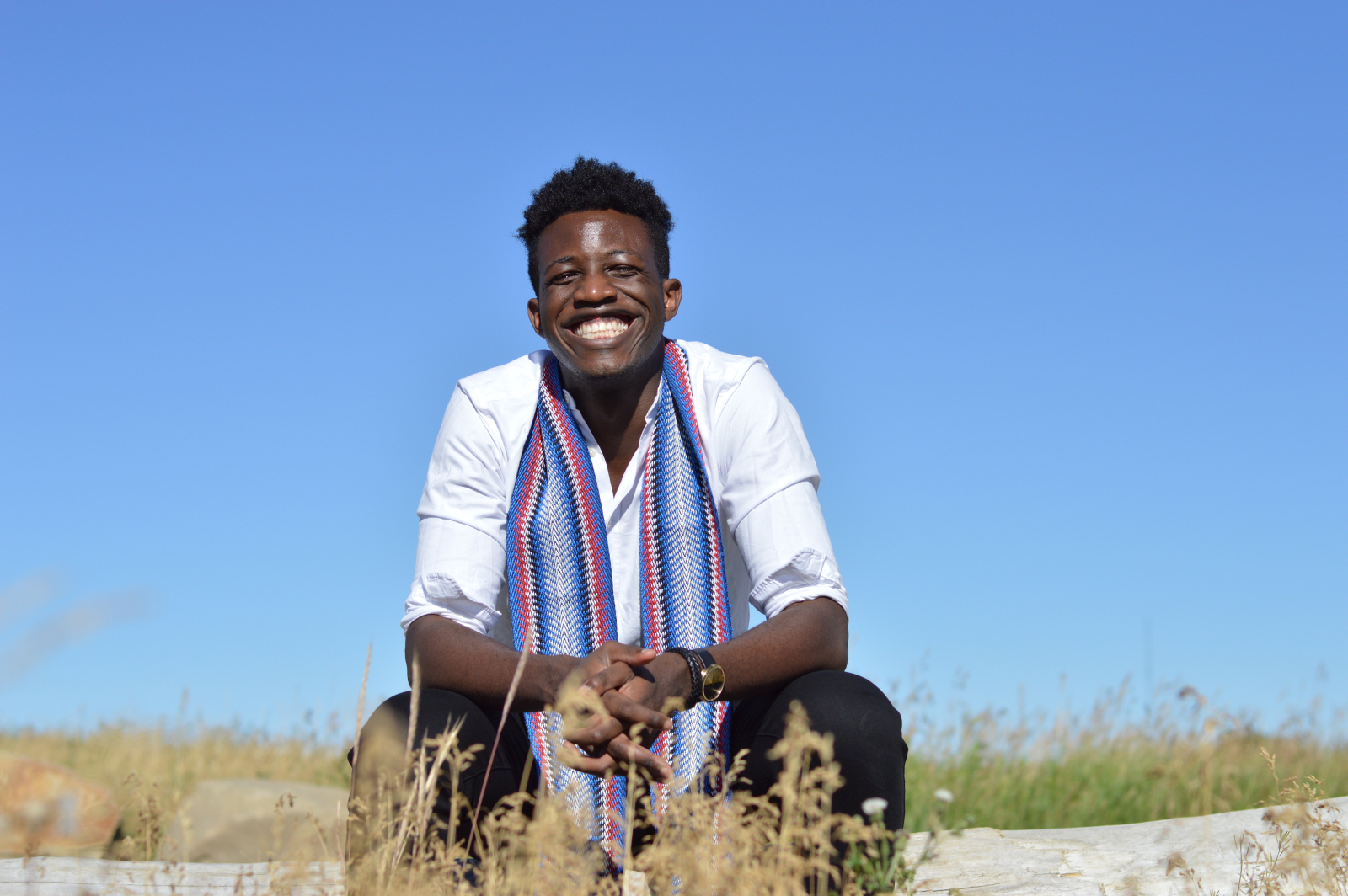 Chúk Odenigbo. Photo by Don He
Previous story
Next story

The 1990s were personally tough for me. I spent the decade immersed in climate catastrophe science, trying and trying, and by all accounts failing, to stem the tide. Hardest of all, death and dementia came to my family.

Meet Chúk Odenigbo, a 28-year-old Black Franco-Albertan from Calgary with laughing eyes and a smile as wide as my screen. Amongst many other achievements, he is the lead author of Les Forces de la Nature: L'Enfant de Gaïa/The Forces of Nature: Gaia's Child, a bilingual, bicultural book for young adults that encourages them to see their unique relationship with nature as their superpower.

Odenigbo is now working on his PhD, exploring the importance of place when looking at human health.

How would you describe the theme that connects all your work?

It is a little corny, but my Big Hairy Audacious Goal (BHAG) is to reconnect humanity with nature in a way that accommodates modernity, sparking that green revolution without denying the present. The dominant image of the person who cares about the environment is someone who is fairly young, very fit, white, anglo and wears expensive, but not chic, clothes; someone who disappears for days at a time into a faraway wilderness with a compass as the only technology.

“It is as if they gave nature a face — and it is not mine. I want to rebrand nature so it is a mirror for all of us,” says Chúk Odenigbo, lead author of a bilingual, bicultural book encouraging young adults to explore their relationship to nature.

You are interested in the place of technology within nature. Why?

People in my generation view their phones as part of their body and feel leaving it behind is unnatural. That doesn’t mean they don’t care about nature.

Why are these stereotypes harmful?

It is as if they gave nature a face — and it is not mine. I want to rebrand nature so it is a mirror for all of us.

As more people find their personal connection with nature, we see more defence of the environment. But this is even more likely if they feel safe. This means that when we build a more integrated society where Black, Indigenous, people of colour, LGBTQ2S+, francophone and all Canadians are comfortable, invited and desired, we are protecting the planet, too.

Tell me a bit about your book.

Les Forces de la Nature: L'Enfant de Gaïa/The Forces of Nature: Gaia's Child is a truly bilingual and bicultural book intended to encourage young readers to see their own way of relating to nature as their superpower, which it truly is. If we are to successfully meet the climate crisis, every one of us will play a role. We will only take that up if we see ourselves as powerful.

We live in the Anthropocene. Humans are the largest force of change on planet Earth. We do have an impact, and we will continue to have an impact. The lost dream of so many environmentalists of a pristine wilderness is not reality. Our responsibility is, as Prof. Erle C. Ellis says, to move toward a better Anthropocene and accept that “the environment will be what we make it.”

What message does your Green Dream photo series convey?

I got together a couple of friends who were models and a photographer, and we had a nearly naked photo shoot with our technology, on an Adam-and-Eve-esque theme. My Green Dream illustrates the idea that we do not need to reject modernity in order to embrace nature. The UN published the photo series, and I got named one of the Top 25 Environmentalists Under 25 in Canada because of it.

You are also interested in fashion. How does that mesh with your love of nature?

I seek to integrate humanity and nature in such a way that the systems which man uses, including fashion, are modified to incorporate nature. I want to reduce the feeling that there has to be a choice. You can dress to impress, wear that incredible white dress and go sit down on the ground in the park and chat with friends.

For example, in 2018, I conceived and produced a fashion show at the Vancouver Aquarium. We selected the designers based on their commitment to sustainability and ocean ethics in their work. The clothes were ethically sourced, produced and sold. We sold out. The 300 people who attended did not come for the ocean or for the fish. They came because we offered fabulous Canadian fashion design. They arrived as fashionistas, believing they had to choose between their love of fashion and their innate love of nature. But they left understanding that their love of fashion and design could enhance, rather than detract from, their love of the natural world

Is there something you can tell us about the way you were raised or the elders in your life who built your passion?

When I was growing up, Michaëlle Jean became governor general of Canada. To see an immigrant, very francophone woman become the first Black head of state of a western country really opened up my mind to the possibility that I, too, could be someone in Canada.

She created waves, using her platform to fight for the rights of women, the rights of racialized minorities and the rights of francophones, while resolutely remaining connected to her identity and Haiti, her country of origin. My parents, UN diplomats, overcame a lot of obstacles to be successful in their lives and gave me the confidence and resilience to persevere. But they have been successful outside of Canada. Michaëlle Jean showed me I could be successful at home.

Barbara Wilson, a Haida elder who has a Black grandfather, shared with me her experiences of being on the receiving end of anti-Black racism when she was amongst other Haida people, and anti-Indigenous racism amongst white people when she moved to Vancouver. Despite all that adversity, she succeeded in becoming an essential pillar of the Haida community. I remember her story whenever I experience racism and discrimination as I do my work.

Populism scares me because it sets up false conflicts. There are things that can and should be heavily debated, like the best way to diversify an economy, but there are things we need to be unified about, such as scientific realities. Climate change is real, COVID-19 is not a political hoax, Black lives do matter, Asian people are not viruses, Indigenous people should be respected. It worries me that we are still having conversations surrounding facts, rather than having robust discussions on solutions.

What advice do you have for younger people?

Be your full self. In recognizing your identity as a young person and all that your identity entails, infuse that into the work that you want to do. Make it unique to you. Be confident in who you are, but also be self-aware in knowing where you need growth.