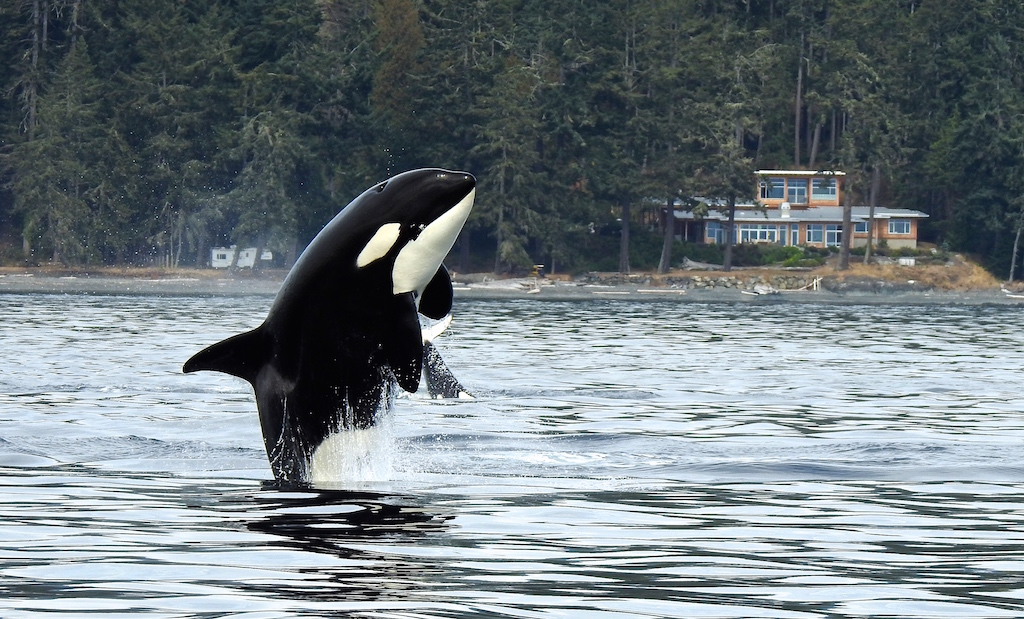 A Biggs killer whale leaps from the waters near southern Vancouver Island while being monitored by one of Cetus Society's Straitwatch teams. Photo: Rosie Poirier-Mozun.
Previous story
Next story

A putrid stink wafts across the water and engulfs the Straitwatch vessel floating off the southern end of Quadra Island.

The Zodiac’s operator, Alex Forman, wrinkles his nose at the odour that hangs in the air, strongly reminiscent of fermented garbage.

“Whale breath,” he explains. “Humpbacks don’t brush their teeth much.”

The three-person Straitwatch team has been monitoring two humpback whales during the last weekend of operation before wrapping up for the winter.

The whales — which have been lolling around the Wilby Shoals for much of the day — have just flipped their flukes skyward and disappeared beneath the grey waters off eastern Vancouver Island, likely for the next 15 minutes. 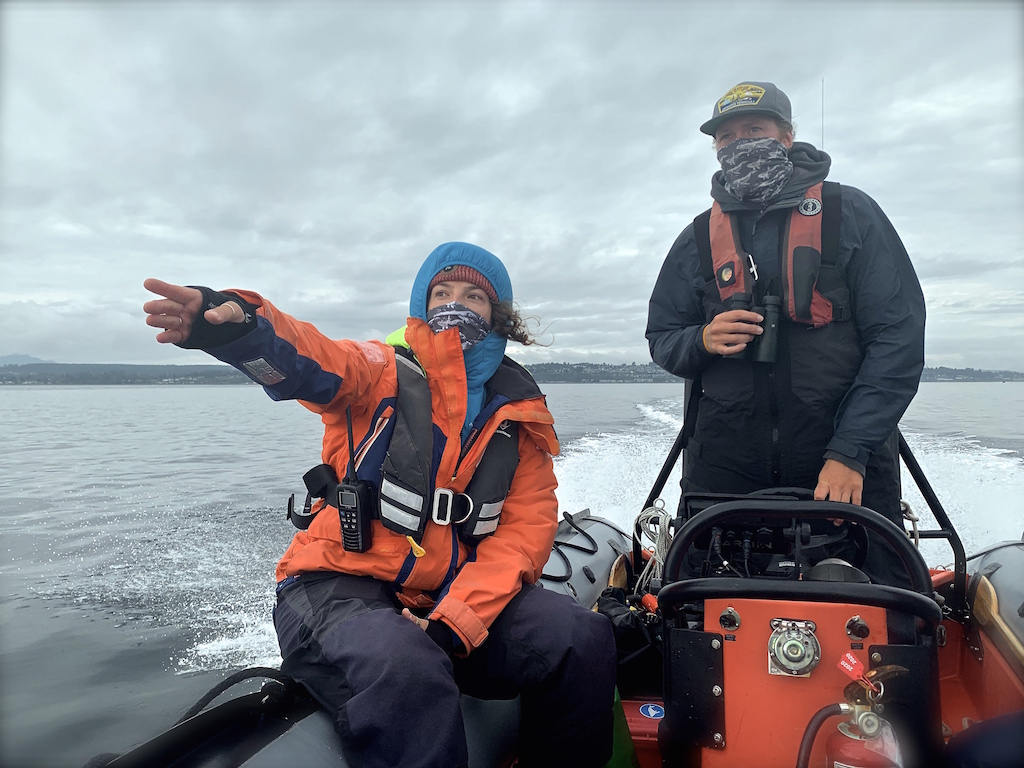 The Quadra-based team is one of several in B.C. waters run by Cetus Research and Conservation Society, an organization that protects whales through research, education and direct intervention.

The crews patrol waters that are considered whale hot spots, and where vessel traffic is heavy.

Straitwatch, a Quadra-based team, is one of several in B.C. waters run by Cetus Research and Conservation Society, an organization that protects whales through research, education and direct intervention. @CetusSociety #whales #orcas #humpbacks

Humpback numbers off northeast Vancouver Island have risen sharply over the past two decades after nearly being wiped out by whaling before the practice was banned in the mid-1960s, she says.

That’s good news overall, but there has been a corresponding increase in human-caused negative impacts on the whales.

Humpbacks are particularly prone to deadly vessel strikes since the slower-moving whales don’t have highly visible dorsal fins and spend a greater amount of time sitting immobile, or “logging,” at the water’s surface, Shuparski says.

Plus, being baleen whales, humpbacks don’t use echolocation to “visualize” boats like some other whales, so they can surface in front of boats unexpectedly.

Humpbacks, along with a host of other marine mammals, also risk entanglement and death from ghost gear — lost, damaged or discarded fishing equipment.

This summer, the Quadra Straitwatch assisted Fisheries and Oceans Canada in its attempts to free two whales tangled in gear in the waters off Quadra, Shuparski says.

Many humpbacks bear telltale scars from ghost gear or vessel strikes, she says.

In fact, of the two humpbacks being monitored by Straitwatch, named Diamond and Raza, the second is easily identifiable by the deep notches across its back, former wounds from a boat propeller, Shuparski adds.

Preventing such injuries to whales is one reason the Straitwatch boat is out on the water, she says.

The team members playfully describe themselves as “whale babysitters” or “whale police.”

“Because that’s pretty much what we do,” Shuparski says with a laugh.

The crews educate boaters about the risks their vessels pose to whales and share the Be Whale Wise guidelines.

The guidelines call for boaters to slow down within range of the marine mammals, stay 400 metres away from all killer whales in southern B.C. waters and keep a 200-metre distance in other areas of the Pacific Coast.

Additional federal regulations call for a 200-metre distance for all other whales resting in the water or accompanied by calves. 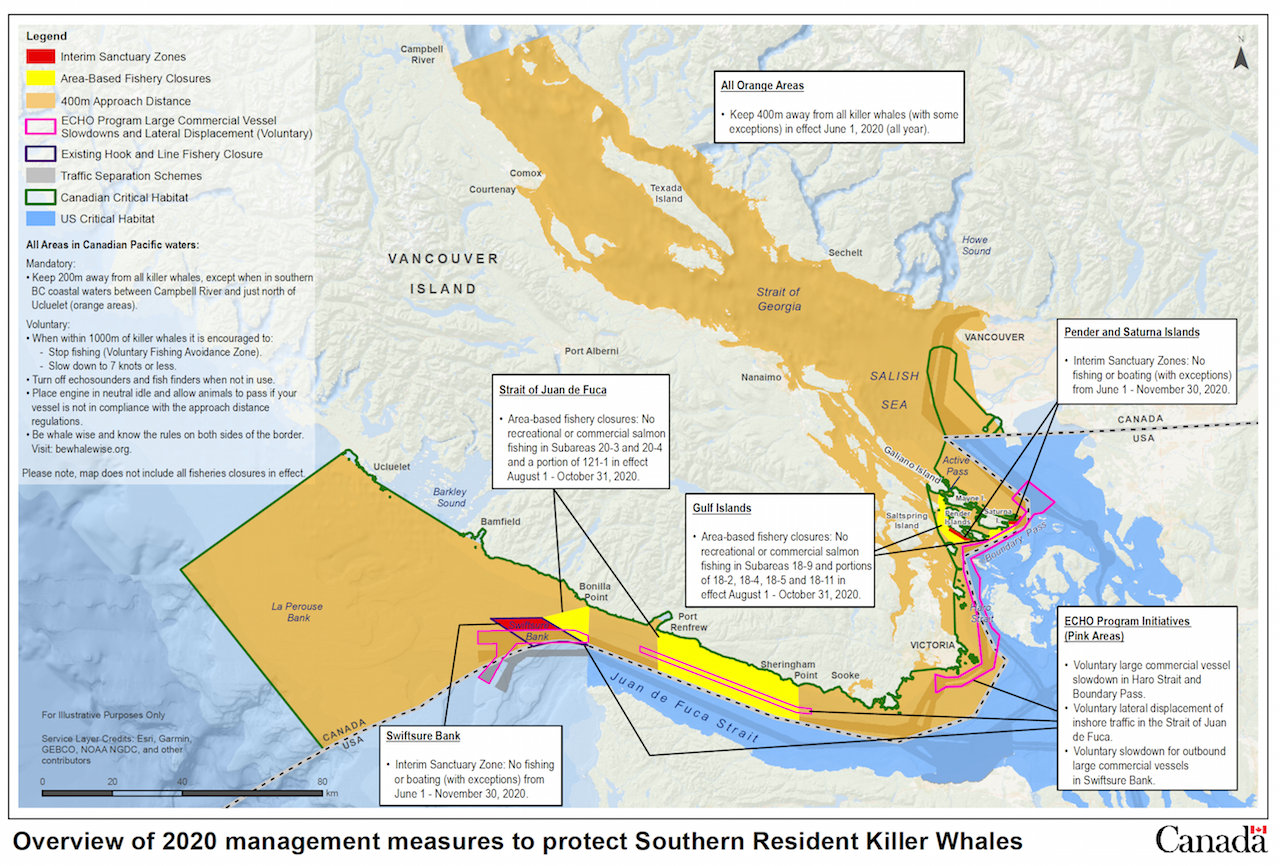 Though the Straitwatch crew doesn’t have any enforcement powers, it will directly intervene to establish a safe perimeter around whales or stop disruptions to the marine mammals, Shuparski says.

At one point, a recreational boat blows past the Straitwatch vessel and two nearby whale-watching boats that are maintaining the required distance away from the humpbacks.

The boat races towards Diamond and Raza, and the operator only kills the engine once they are nearly on top of the whales. The Straitwatch team exchanges knowing looks.

“Should we put on the lights and siren?” Forman asks.

As soon as the whales cruise off to a safe distance, the team motors over to speak with the offending boaters.

The smell of pot drifts off the vessel, carrying occupants who are clearly entranced by the sight of the whales.

When asked if they’re aware of the Whale Wise guidelines, the boaters are affable, saying they think they have to stay 30 metres away from the whales.

Shuparski outlines the actual regulations for the boaters. 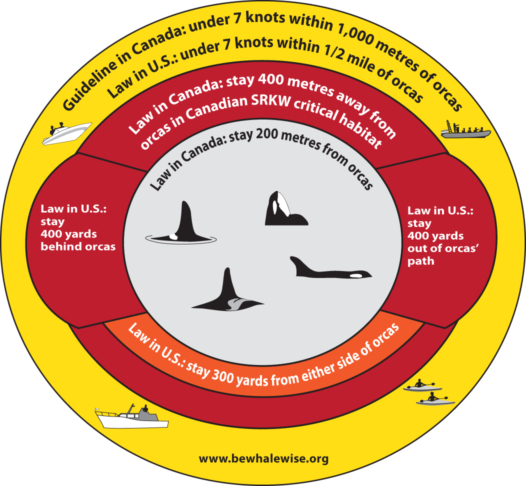 The driver nods, thanks her and then guns the motor, speeding off again despite the fact the whales have dived and it’s not entirely clear where they will surface.

Straitwatch records data on violations, vessel and whale interactions and behaviours, she says.

The information is useful to determine what types of education or policy changes might be needed to better protect whales, she adds.

It’s late afternoon and dark rain clouds begin to bundle up in the sky over Discovery Passage, the narrow channel between Vancouver Island and Quadra.

The Straitwatch team considers heading home as boat traffic begins to die down.

But suddenly a call on the radio advises a pod of killer whales is transiting the passage. 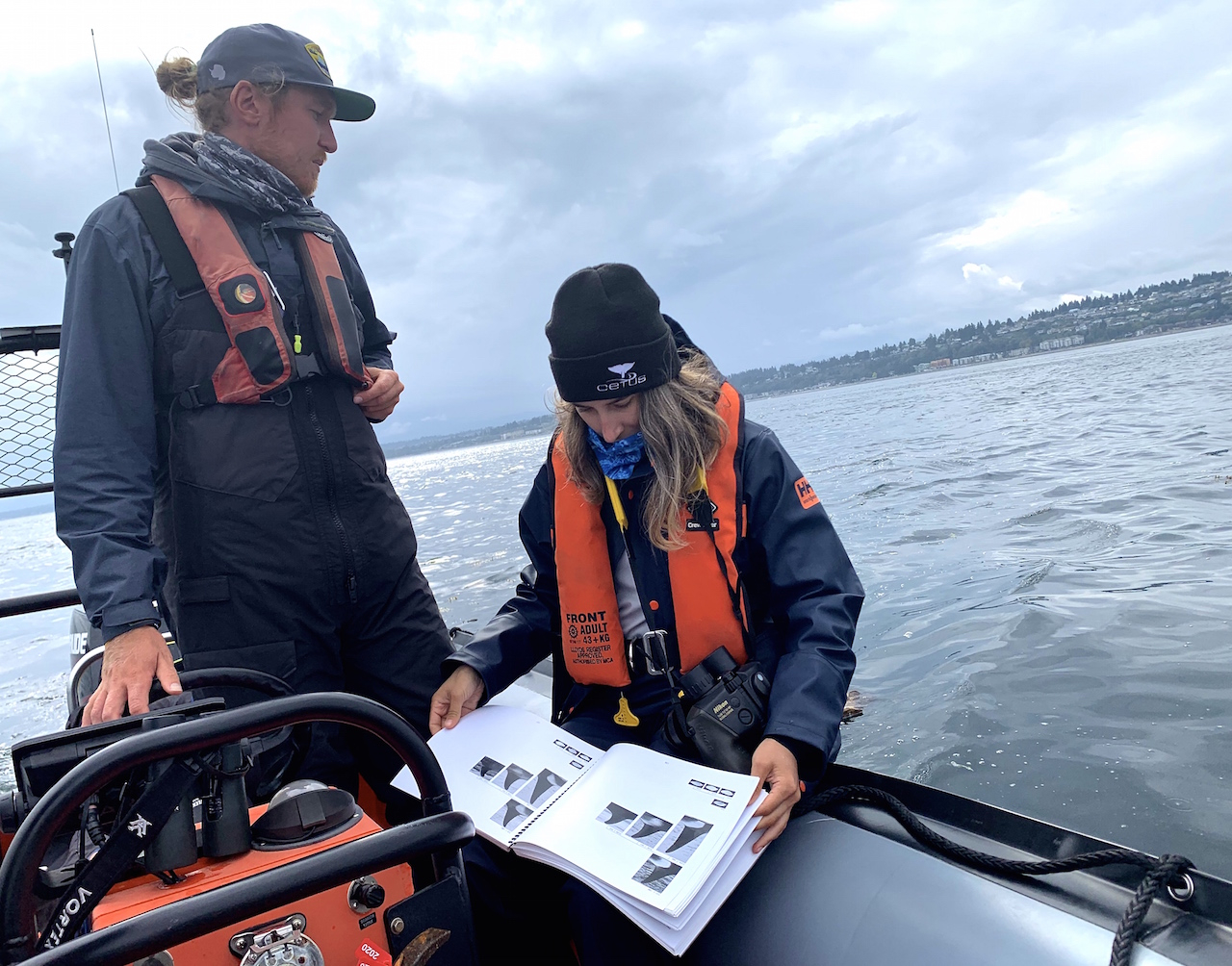 The crew heads off to find them. The whales are sighted in the middle of the busy shipping lane near the city of Campbell River.

As Forman pilots the Straitwatch boat towards the whales, he notices a large commercial vessel speeding up the centre of the passage from behind.

He angles his Zodiac, adorned with a whale watch flag, to carefully intersect with the approaching boat to draw its attention to the whales, slow it down and gently nudge the vessel away from the orcas’ path.

“It’s a nice passive way to slow them down,” Forman says.

The tactic has the desired effect. The large aluminum boat circumvents the killer whales and slows dramatically as it steers into Campbell River.

The crew identifies the pod as the T90s — a Biggs (transient) orca family that travels the entire Nortwest Coast in search of its prey, other marine mammals such as seals and sea lions.

Though still at risk, the Biggs killer whales aren’t as threatened as the southern resident whales that only consume chinook salmon, Shuparski says.

However all killer whales are sensitive to pollution, boat noise and vessel disturbance, she adds.

“We can’t do much to immediately limit some of the things threatening killer whales,” Shuparski says. “But limiting boat traffic is something we can change pretty easily.”

The Straitwatch crew escorts the T90s for the next hour or so as they make their way south.

Eventually, as the pod passes Mitlenatch Island into the open waters of the Georgia Strait, the crew opts to head home to Quadra.

“They should be alright now,” Forman says.

The rest of the team agrees as he points the vessel northwards, just as the sky opens up and sheets of rain begin to fall.