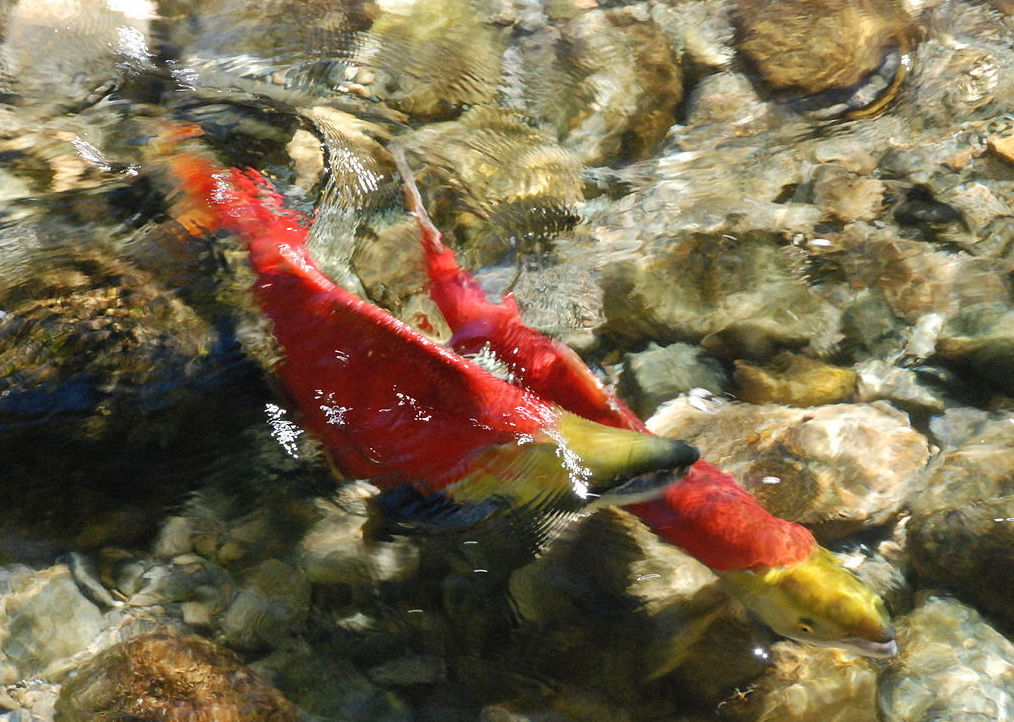 The Pacific Salmon Explorer, a data-visualization website, allows people to see how the wild fish are doing in streams across the province. Photo by William Rosmus CC BY-SA 4.0
Previous story
Next story

The Pacific Salmon Explorer is a public data-visualization site that people can use to see what types of salmon are returning to a given area and find available data on the health of the population and the cumulative habitat pressures the fish may be facing.

“I would say that this is the first time that you've got data for salmon all in one place online in a map. It really hasn't been done before.”

We're excited to announce the release of new features added to @PSF’s Pacific Salmon Explorer. 2020 marks our 6th year of working with @PSF & we look forward to making continuous contributions to this important biological and #environmental #conservation tool. pic.twitter.com/b1M9lqhFdR

The Pacific Salmon Explorer provides valuable insights into the current health of salmon both across the board and at very local levels, she said.

The user-friendly tool has compiled, synthesized and standardized data from a large number of sources, so people can easily compare how salmon are doing in different areas.

“Now, for example, we can easily look at the Skeena River watershed and compare that to salmon on Vancouver Island,” Connors said.

“Then you can start to see any potential conservation concerns we need to start paying attention to, and more importantly, what actions we can take to better support the recovery and long-term persistence (of) those populations or species.”

The Pacific Salmon Explorer started out by looking at parts of the north and central coasts of B.C., but the most recent updates include data for southern B.C., and the tool now has information about more than 80 per cent of salmon across the province, Connors said.

“It's unprecedented. This is the first time that you've got data for salmon all in one place online in a map. It really hasn't been done before,” Katrina Connors said of the @PSF's public online conservation tool. #BCsalmon

It details salmon species and important watersheds such as the Nass, Skeena and Fraser rivers, as well as the Central Coast, Vancouver Island and Mainland Inlets.

The site outlines available data around 411 biologically, ecologically and genetically unique groups of salmon populations, known as conservation units (CUs), across the province.

The online tool has already been used to help assess and identify strategies to assist in the recovery of southern B.C. Chinook salmon, also critical to the survival of endangered southern resident killer whales.

The Pacific Salmon Explorer also assisted a First Nations coalition and its partners in developing a conservation plan for salmon on B.C.'s Central Coast, Connors said.

Digging into the status of salmon

The Pacific Salmon Explorer maps highlight areas where certain salmon are doing well, or poorly, and outline gaps in data on certain types of fish.

This can work either to spur positive change or identify what’s working when it comes to salmon habitat, said Jason Hwang, vice-president of the Pacific Salmon Foundation.

“When the public becomes aware that a salmon population is in trouble, there tends to be a call for action to try and make things better,” Hwang said, noting that could include starting a hatchery program or working to restore a fish habitat.

“Or, if you have a healthy population and the habitat is good, then what you want to know is how to keep it that way.”

Generally, the broader picture shows an overall decline in the health of some Pacific salmon populations, Hwang said.

For example, the Fraser River sockeye salmon runs are predicted to be 293,000 fish, the lowest number since records began in 1983.

However, the health of each salmon run and its habitat needs to be examined individually, he said, adding there are hundreds of genetically unique populations spread across thousands of streams. And it’s important that diversity is protected for the overall resiliency of salmon, Hwang added.

Some salmon populations seem to be healthy, and fluctuations in returns are not unusual, he said.

“For example, some sockeye populations are doing reasonably well off the west coast of Vancouver Island,” Hwang said.

Connors agreed, saying there are bright spots for returns of sockeye in the Sprout, Central and Nimpkish lake systems.

But Connors also noted salmon returns are individual and variable, even in the same watershed.

For example, the Nimpkish Lake sockeye on northern Vancouver Island are seeing an upward trend in their numbers, while chum salmon returns along the river aren’t doing as well, she said.

“So, it is important to be able to kind of tease apart how these different populations are doing,” Connors said, “and maybe make investments in resources for the recovery and restoration of those that maybe aren't doing so well.”

Lauren Miller, a director with the Quadra Island Salmon Enhancement Society (QISE), said she was looking forward to checking out the Pacific Salmon Explorer.

“It certainly seems relevant to QISE and other types of stream-keeper organizations,” Miller said.

The Quadra conservation group has a lot of knowledge of what’s going on locally at the stream level, but the site synthesizes useful data about what’s happening with fish across the region, she said.

“It’s also a great opportunity to see if they are using the data we provide to DFO, and compare (the site’s) data to our own,” she added.

The value of data gaps

Some data gaps prevent the Pacific Salmon Explorer from assigning some of the salmon populations a red, yellow or green biological status on the website, Connors said.

Those data gaps may arise because there is insufficient or irregular data available, she said, or the information available can’t be adapted for use in the comparative model.

In some cases, the data simply hasn’t been collected by Fisheries and Oceans Canada (DFO), or other organizations, in watersheds that don’t historically support large commercial fisheries, she said.

“I think there’s no question that in some places there has been some kind of declining investments in monitoring, so the scope of coverage has declined,” Connors said.

However, examining information gaps can lead to new priorities about which systems need better monitoring, she said.

And the Pacific Salmon Explorer is a living tool, with the data and analyses updated on an ongoing basis as new information becomes available, Connors said.

“In an ideal world, addressing all the data gaps would be wonderful,” she said.

However, conservation planning simply doesn’t have the resources to monitor all salmon populations and their habitats equally well, she added.

“So I think what's really needed is making strategic investments where we acquire data ... to help us better understand how salmon are doing and those long-term trends that ultimately can help us make better decisions for salmon.”

[Editor's Note: This story was updated Tuesday morning to correct an error in this story that stated there were 150 salmon conservation units in B.C. There are in fact 411.]