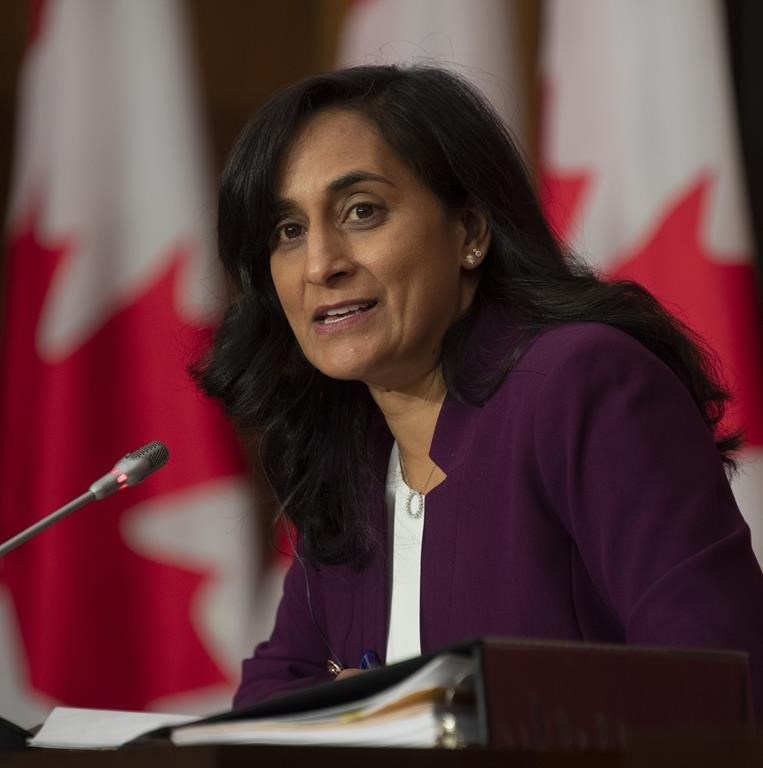 Public Services and Procurement Minister Anita Anand responds to a question during a news conference on Tuesday, October 6, 2020 in Ottawa. File photo by The Canadian Press/Adrian Wyld
Previous story

Procurement Minister Anita Anand says the first shipment of rapid tests for COVID-19 has arrived in Canada, but their eventual destinations remain shrouded in mystery.

Canada signed a deal late last month with Abbott Diagnostics in the United States to buy 7.9 million ID Now tests, which can produce results on the spot in under 15 minutes.

The first shipment of 100,000 of the tests arrived in Canada over the weekend. Anand said another 2.4 million should arrive before the end of December and the rest in the new year.

Shipments of another rapid test, the Abbott Rapid Diagnostics Panbio antigen test, are expected to start soon. Canada bought 20 million of those tests, with 8.5 million expected by the end of 2020, and the rest in 2021.

"Our government continues to step up Canada’s testing capacity in securing the supplies that we need," Anand said in a written statement.

The tests are to be deployed to provincial and territorial governments under an agreement to share the supplies based on both population and need.

But neither Anand's office nor Health Canada will say which province will get them first, or how many will be shipped where. Ottawa also will not say where tens of millions of masks, respirators and other personal protective equipment ordered by the federal government are being sent.

In a global shortage of PPE in the spring, Ottawa began negotiating bulk contracts for desperately needed face masks and N95 respirators and other equipment on behalf of the provinces.

Prime Minister Justin Trudeau said Tuesday more than 800 million pieces of PPE had been received to date and that 20 million of those were distributed to provinces this month so far.

But Health Canada will provide no breakdown of which province got what equipment.

Conservative health critic Michelle Rempel Garner said she is hoping to force the government to be more transparent about this in a health committee study she is proposing.

Procurement Minister Anita Anand says the first shipment of rapid tests for COVID-19 has arrived in Canada, but their eventual destinations remain shrouded in mystery.

The Conservatives Thursday will move a motion calling on the health committee to study multiple facets of Canada's pandemic response, including everything from procurement of supplies and tests, to public health advice on mask wearing, the border closure, long-term care facilities and plans for vaccine approval and distribution.

"I am doing my best to compel them to be more forthcoming," said Rempel.

A similar motion was put to the health committee directly two weeks ago, but Rempel Garner said the government filibustered the committee and prevented the motion from proceeding. She is hoping putting the motion to the full House of Commons will be more successful.

Rempel Garner has been particularly critical of the government for being slow to get rapid tests available, noting many other countries approved them long before Canada did.

Canadian officials said they approved the tests as soon as possible when they were shown to be both safe and effective.

The ID Now tests were approved for use in Canada on Sept. 30 and the Panbio tests Oct. 5. They can be used by trained health-care professionals, on people with symptoms of COVID-19, as a complement to the existing laboratory-based tests when rapid results of many patients could help control the pandemic.

That may be, for example, long-term care homes, schools or food processing plants, where physical distancing is difficult.

Provinces like Ontario, Quebec and Manitoba are desperately trying to improve testing capacity as the second wave of COVID-19 continues to surge.

Demand for testing soared in September as the second wave began to hit, and Canadians in many provinces reported having to wait hours for a test, and many days for a result.

The only tests available before now had to be sent to a laboratory for processing which became overloaded. At one point, Ontario alone had more than 90,000 test swabs backlogged at labs waiting to be analyzed.

The testing delays meant people were waiting longer for notification of positive results, and their close contacts were not asked to isolate and get tested for several days.