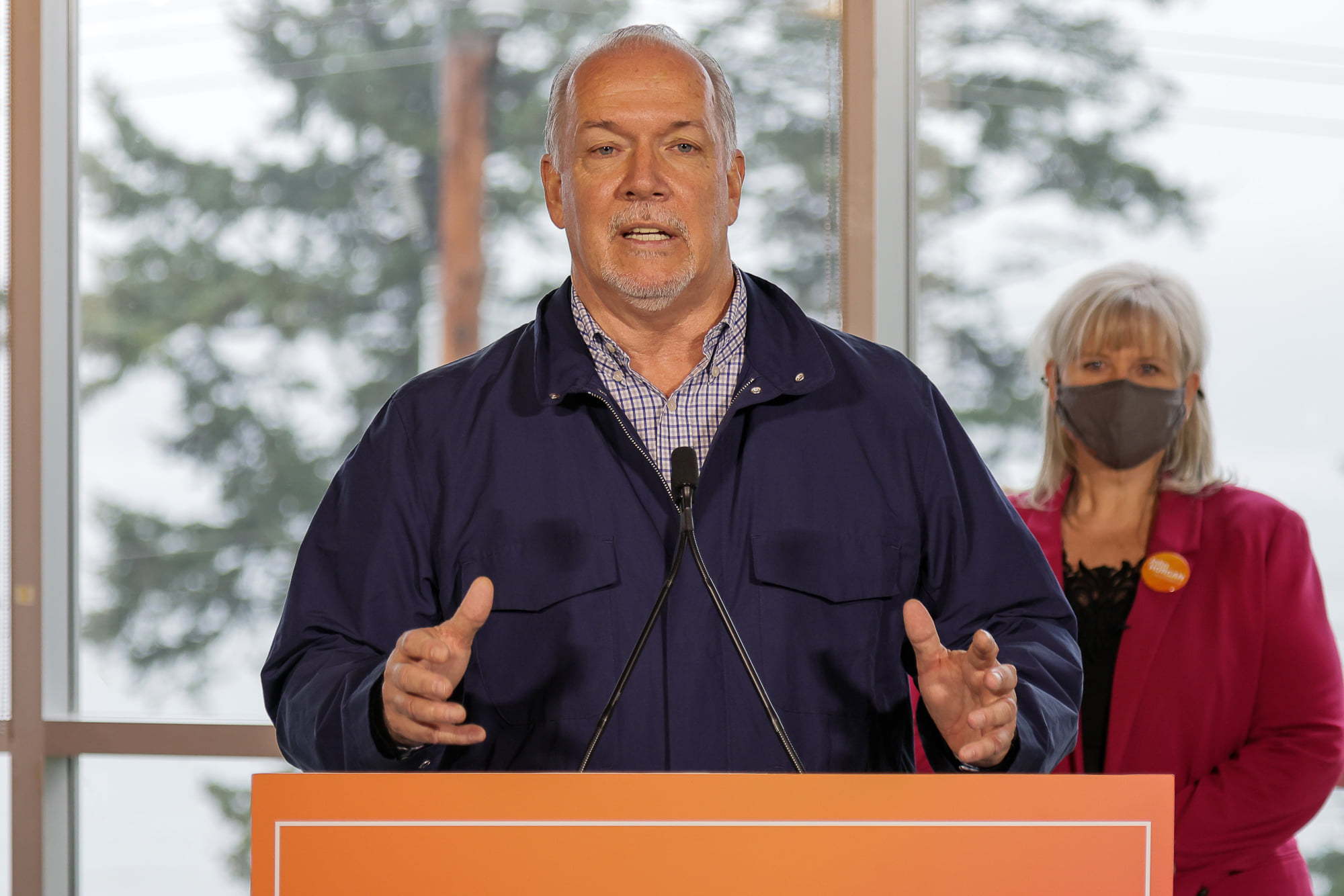 Forestry and fish are playing out as pivotal B.C. election issues in the North Island, as two party leaders paid a visit to the riding in the final week of their campaigns.

The Vancouver Island riding is an NDP stronghold where tourism and forestry, along with fishing and aquaculture, are the region’s economic pillars. And two of the riding’s candidates are heavily invested in some of those sectors.

BC Liberal candidate Norm Facey is a former forestry executive who worked for the region’s pulp mills and logging companies.

His challenger on the opposite side of the spectrum is BC Green Party candidate Alexandra Morton, a fierce critic of open-net pen salmon farms in B.C. waters.

Attempting to walk the line between the two is NDP candidate Michele Babchuk, an experienced municipal politician favoured to win the riding. But Babchuk’s victory is only assured if she stems the loss of resource sector or environmental votes to the other two parties.

The NDP is grappling with the challenge of casting itself as a friend to forestry while still presenting itself as more environmentally progressive than the Liberals — a tactic that doesn’t tend to wash with most Greens.

Both the BC Liberal and NDP leaders tried to capitalize on the political tension between the economy and environment to snag votes during visits to the North Island over the weekend.

Liberal Leader Andrew Wilkinson’s arrival to pitch the party’s forestry plan was heralded by a convoy of logging trucks during his second visit to Campbell River within three weeks on Saturday.

Forestry and fish are playing out as pivotal B.C. election issues in the North Island, as two party leaders paid a visit to the riding in the final week of their campaigns. #bcpoli #BCelxn2020

The extra attention from party leaders, as well as the backgrounds of the North Island candidates, reflect how the environment and economy are intersecting as election issues in rural, resource-based ridings across the province, says Will Greaves, a political scientist at the University of Victoria.

“I see this tension between them as being a major fault line that runs through the NDP coalition and poses a pretty significant political risk to them,” Greaves said.

It’s still likely the NDP will take the majority of the seats in the upcoming election, but the party’s weak spot is likely to grow over time, said Greaves, especially as the NDP moves forward with liquefied natural gas development and is forced to stickhandle technical issues linked to the construction of the Site C hydroelectric project.

Recent poll results show the NDP losing a handful of points to the Liberals and Greens in the last leg of the election.

Polls suggest that people who have already voted, mostly in Metro Vancouver and on Vancouver Island, largely supported the NDP.

But among voters that still have to cast their ballot, in the province’s rural Northern and Interior ridings and the Fraser Valley, support appears to be closely split between the NDP and Liberals.

The NDP camp currently includes traditional allies from the labour and resource sectors, but the party has gained traction with socially progressive, young, diverse and urban voters in the Lower Mainland, Greaves said.

“So the North Island riding is going to be an interesting test case,” he said.

NDP voters in the riding likely range the party’s spectrum and will be looking to see if the NDP is serving their interests, he said.

“I think that's kind of the question on which the future of the NDP in more rural and resource-intensive ridings will hang.”

As for the North Island riding, there’s an off chance the Greens could play a spoiler role and hand the riding to the Liberals, Greaves said.

But given past election results, they’d have to pull a significant number of votes exclusively from the NDP, he said.

The NDP captured 48 per cent of the vote in the 2017 election in the North Island riding, followed by the B.C. Liberals at 35 per cent and the B.C. Greens with 15 per cent.

And the Liberals might capitalize on the resources sectors’ discontent with the NDP, but it’s unlikely to close a 10-point spread, Greaves said.

So, the NDP’s middle-lane approach to forestry and fish issues may actually help the party hang onto the riding this election, Greaves said.

“It's certainly plausible it may actually serve to benefit the NDP as being best positioned to try to navigate some of those divides.”

Politicians, show us your blueprint to protect our coast

Are environmentalists turning away from the BC NDP?

You say that polls have

You say that polls have dropped, but compared to the last Angus Reid poll, the more recent one averaged an older demographic. It's down slightly, but I don't think opinions have changed much.

The NDP numbers for the Fraser Valley and Vancouver Island are actually up from the last sample, and their numbers for all 18-34 and male 35-54 are also up. Strangely, it's mostly among the female demographic that the Liberals made some gains.

Right now, I can't think of

The NDP would be well advised

The NDP would be well advised to remember a comment by Texas activist and writer Jim Hightower: "There's nothing in the middle of the road but yellow stripes and dead armadillos".