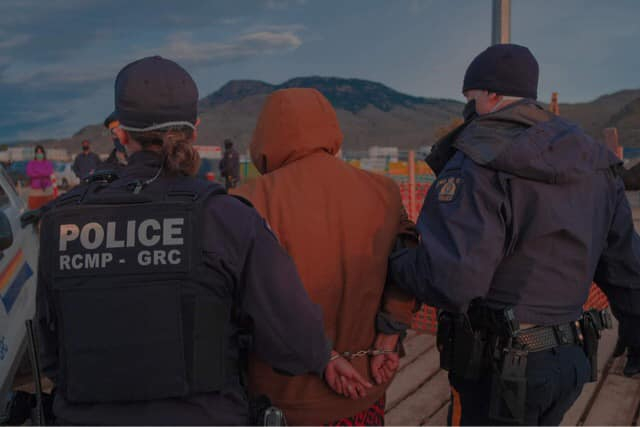 The RCMP's failure to protect Mi'kmaq fishers from intimidation, assault and destruction in Nova Scotia demonstrates how the Canadian state is all too ready to permit or perpetrate violence against Indigenous Peoples, say First Nations groups and B.C. politicians.

On the one hand, police have been quick to arrest Indigenous leaders when they might threaten the interests of fossil fuel companies, as in the case of the Trans Mountain pipeline expansion project (TMX), where RCMP arrested a Secwepemc hereditary chief and others last week to clear a path for the pipeline’s construction.

Then there was the RCMP's raid on Wet’suwet’en Nation territory in February, to clear the route for the Coastal GasLink pipeline, where officers pointed their guns, destroyed a gate, extinguished a sacred fire and arrested people, including several matriarchs, loading them into police vans and cuffing them with zip ties.

In the cases concerning the Trans Mountain and Coastal GasLink pipelines, the RCMP were enforcing court injunctions allowing safe access to work areas.

On the other hand, RCMP have been criticized as slow to act as an angry mob descended upon a lobster pound in West Pubnico, N.S., kicking doors and pelting the building with rocks.

"The RCMP just stood there," one lobster fisher with the Sipekne’katik First Nation told the Toronto Star.

In addition to the lobster pound attack, a vehicle has been set ablaze, lobster traps have been pulled out of the ocean and the chief of Sipekne’katik First Nation, Michael Sack, was assaulted.

“I definitely see parallels, with the state allowing violence to happen to Indigenous people,” said Molly Wickham, spokeswoman for the Gidimt’en camp of Wet'suwet'en Nation members.

“In our case it was the government allowing RCMP to come in and bring violence into our communities,” Wickham said. “The actions of RCMP show citizens what they are allowed to do to Indigenous people.”

Indigenous groups and politicians are drawing comparisons between the violence brought upon Mi'kmaq fishers in Nova Scotia and the Canadian state’s defence of pipeline projects in the West. #Mikmaq #NovaScotia

The Mi’kmaq’s treaty right to fish for a moderate livelihood has also been affirmed by the Supreme Court, and the Sipekne’katik First Nation was exercising its constitutionally protected rights when it opened a self-regulated lobster fishery in September.

Despite this, “little action has been taken to prosecute the criminal behaviour of those inciting hatred and terror and who have created an environment of lawlessness and violence,” the BC Assembly of First Nations said on Oct. 18.

The RCMP failed to uphold the Constitution and the honour of the Crown in Mi’kmaq territory, argued the assembly. They said the turn of events threatens to “unravel” decades of work towards reconciliation, meaningful dialogue and respect for rights, title and First Nations’ jurisdictions.

“As Canadians witness events unfold in the Atlantic lobster fishery dispute it has become even more apparent that the standard of justice and law enforcement in Canada are deeply flawed and corrupted by systemic racism,” it said.

'Vast majority of officers do their best,' says Blair

Federal Indigenous Services Minister Marc Miller said Monday during a press conference in Ottawa that the acts of violence in Nova Scotia were "disgusting, unacceptable and racist in nature."

The situation demonstrated that, "once again ... Indigenous people have been let down by the police, those who are sworn to protect them," he said.

"Throughout history, Indigenous Peoples have experienced continuous discrimination and to this day still suffer the consequences of colonial practices. But they have shown an extreme resilience and courage in standing up for their rights."

The federal government has said it strongly condemns the violence that has taken place and that officials want “respectful dialogue” concerning Mi’kmaq treaty rights. Federal Fisheries Minister Bernadette Jordan has said negotiations are ongoing and that she will continue to work with the Mi’kmaq.

Blair's cabinet colleague, Public Safety Minister Bill Blair, stood up for the force's efforts in Nova Scotia during the same press conference. Asked directly if he agreed that police were failing the Mi'kmaq, he said the police "have a responsibility to protect all Canadians" as well as uphold Indigenous rights.

"I believe the vast majority of officers do their best to serve those communities with professionalism and with integrity and respect but clearly there are concerns within the communities that we are working hard to address," said Blair.

Many of the RCMP officers deployed in the area are Indigenous themselves, the minister noted, and grew up in the communities in which they serve.

"I think it’s important that cultural competency and understanding of not just the long history, but the cultural concerns and the very legitimate concerns of Indigenous people on how the police serve and protect them and uphold and respect Indigenous rights is critical to that work," he said.

RCMP "has a significant presence" in the area where the vehicle fire occured, said the force, "including general duty officers from several local detachments; officers from across the division and RCMP in Prince Edward Island with specialized training in de-escalation and crowd control."

The police's "division liaison team" was also fully engaged in the area, they said, "continuing their work to build and maintain relationships among those involved." An RCMP spokesperson was not immediately available to comment.

Sack, however, cast doubt on the RCMP’s ability to control the situation, saying he’d prefer the military step in, and calling the RCMP "useless."

Blair said he appreciated Sack's comments and shared concern over the violence but noted that it wasn't a military operation, it was a "peacekeeping operation" and was the responsibility of the police of jurisdiction in the area — in this case, the RCMP.

"We have taken steps necessary to ensure that they have adequate resources to do the job," he said.

The minister also said one of the best ways to prevent further criminality and violence is to hold people to account when crimes have been committed.

"I want to assure Canadians that the RCMP know that they have a responsibility to maintain the peace. When crimes are committed, people are to be charged and held to account. Those investigations are ongoing. Those court cases will proceed," he said.

Green party parliamentary leader Elizabeth May, MP for Saanich—Gulf Islands, asked in the House of Commons Monday why there was “never any shortage of well-equipped RCMP officers to arrest Indigenous non-violent protesters against pipelines in British Columbia, but no one to protect the Indigenous catch in a warehouse in Nova Scotia?”

On Twitter, former MP Romeo Saganash said: “Why is it that the TMX pipeline route is being afforded an ongoing protection by the RCMP, but the Mi'kmaq are not afforded the same protection for exercising a constitutionally protected treaty right?”

Former justice minister and Independent MP for Vancouver Granville, Jody Wilson-Raybould, said on CBC Radio on Tuesday that Mi’kmaq need to be involved in decision-making and co-operative management around the fishery.

“This is the work that’s long past due, and the federal government has a responsibility to do something about it,” she said.