Tim Hortons ditches two cups in favour of one with sleeve 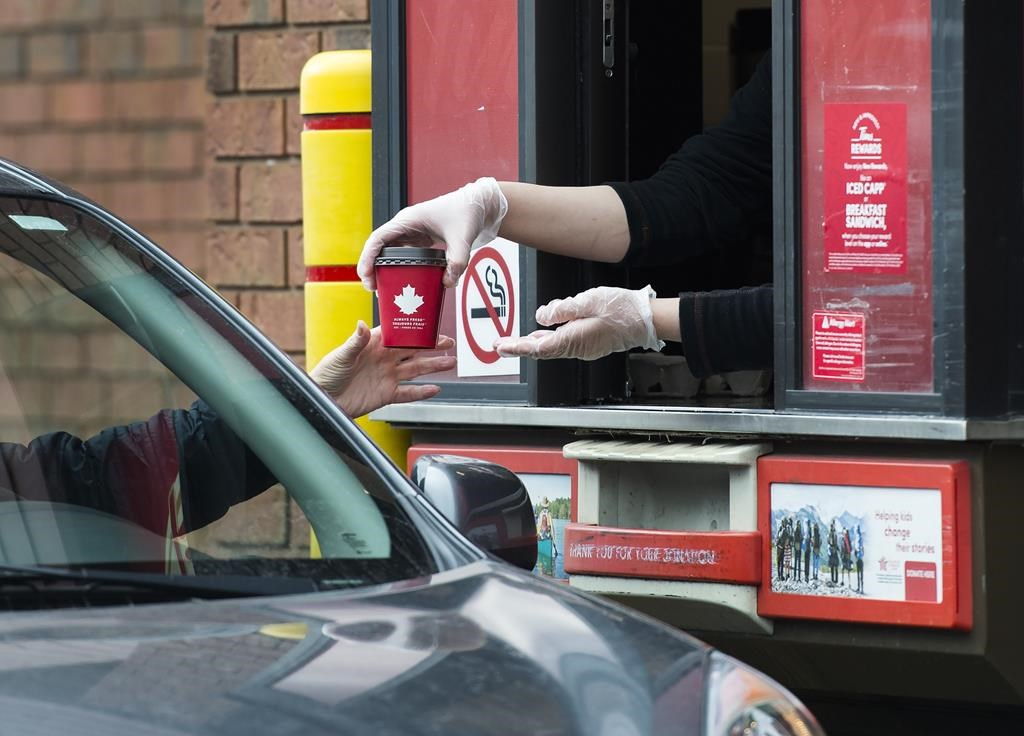 A Tim Hortons employee hands out coffee from a drive-through window to a customer in Mississauga, Ont., on March 17, 2020. File photo by The Canadian Press/Nathan Denette
Previous story
Next story

Tim Hortons is ending the practice of double cupping hot drinks, a move the fast food restaurant says will eliminate hundreds of millions of cups from landfills each year.

The subsidiary of Restaurant Brands International Inc. will instead provide customers with a cup sleeve, a thick paper material that protects hands from hot beverages.

“Sleeves are a great alternative," said Hope Bagozzi, chief marketing officer at Tim Hortons. "They keep your hands cool but they're just better for the environment."

She said cup sleeves will be used by default for hot beverages like tea and espresso and can be requested for other warm drinks.

Customers who ask for a beverage to be double cupped will now be asked to consider using a sleeve instead.

"We're hoping the majority of guests will be OK with that," Bagozzi said. "But it obviously won't transform overnight. If a guest insists on it and it's going to become an altercation, I don't want a team member to be put in that position."

The company expects that stopping the practice of double cupping will save roughly 200 million cups from being tossed in the garbage every year.

Most recycling facilities in Canada don't recycle single use paper coffee cups because of a plastic lining inside.

But Bagozzi said the company is trying to change that, and is in talks with suppliers about recyclable and biodegradable cups.

Tim Hortons is ending the practice of double cupping hot drinks, a move the fast food restaurant says will eliminate hundreds of millions of cups from landfills each year.

She said the challenge is to ensure the cup maintains its structural integrity.

"We want to be sure that they are safe and they don't crumble," Bagozzi said. "They've come a long way and we're very bullish with our partners about leading the way in innovation there."

She said Tim Hortons has two pilot programs coming soon, one that will test a cup with a compostable liner and another made with 35 per cent recycled materials.

"As the biggest market leader when it comes to coffee and hot beverages in Canada, it's part of our responsibility to look at our footprint and our sustainability," said Bagozzi. "The notion of double cupping is a big deal and it catches attention but it's just one of many things that we're working on."

The end of double cupping is part of a suite of changes the coffee and doughnut chain is announcing as part of waste reduction week.

In a bid to improve its environmental footprint, Tim Hortons said on Tuesday it would soon roll out new recyclable paper-based wrappers for sandwiches and bagels, eliminating of about 460 tonnes of plastic from the waste stream each year.

On Monday, the fast food chain said it plans to introduce new paper napkins that use 25 per cent less material and are made up of 100 per cent recycled fibre. The change in early 2021 is expected to save 900 tonnes of paper a year.

Tim Hortons is also phasing out plastic straws from its 4,000 restaurants across Canada.

The restaurant said last week the transition to paper straws is expected to be completed by early next year, eliminating roughly 300 million plastic straws a year.

Companies in this story: (TSX: QSR)