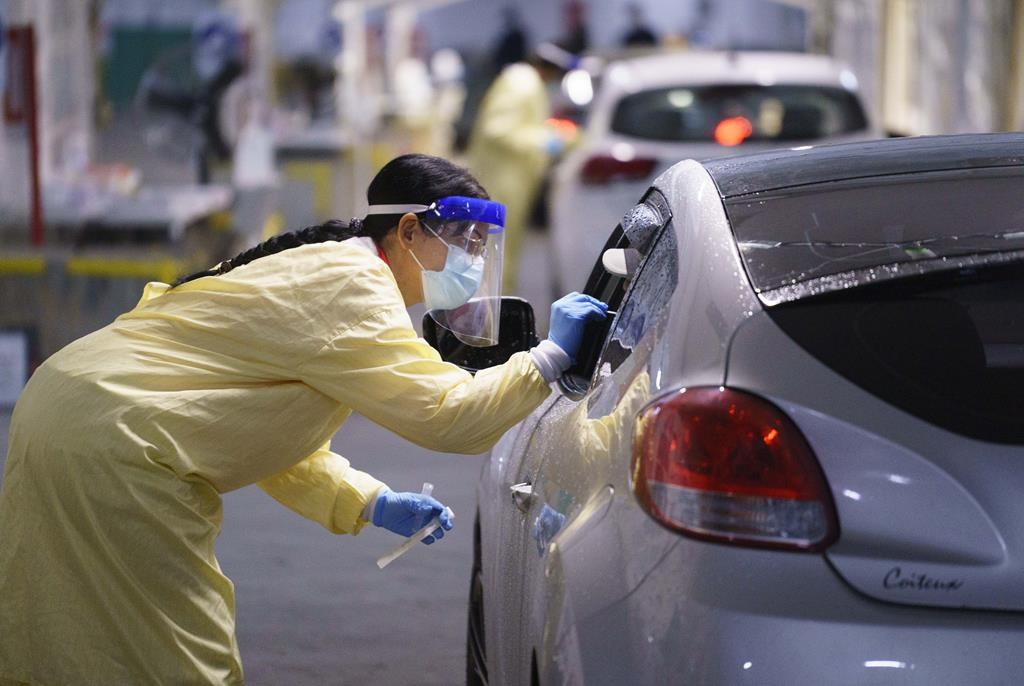 A nurse performs a test on a patient at a drive-in COVID-19 clinic in Montreal, on Wednesday, October 21, 2020. Photo by The Canadian Press/Paul Chiasson
Previous story
Next story

Health officials in Toronto and Montreal struck vastly different tones on the state of COVID-19 in their cities on Wednesday, with Toronto's medical officer of health warning the Ontario capital could be following in the footsteps of hard-hit Europe.

Dr. Eileen de Villa said she was concerned with a one-day, 21-person rise in hospitalizations and a test positivity rate that climbed from 3.1 per cent to 4.4 per cent since Monday.

"I'm concerned that this upward climb is not over, especially when I look at COVID-19's renewed eruption in other countries," she said.

She noted that rising cases have prompted new lockdowns in several European countries, including Ireland and parts of the United Kingdom.

"There is nothing to prevent COVID-19 from catching fire here except the choices we make," she said.

In contrast, officials in Montreal said the situation in the city was "progressing in the right direction" following a stabilization of cases and hospitalizations in recent weeks.

Montreal is the epicentre of the virus in Canada, with almost 40,000 cases.

However, Drouin noted the city is still battling some 200 outbreaks as well as a test positivity rate above five per cent, and urged Montrealers not to relax their guard.

Health officials in Toronto and Montreal struck vastly different tones on the state of COVID-19 in their cities on Wednesday, with Toronto's medical officer of health warning the Ontario capital could be following in the footsteps of hard-hit Europe.

Quebec once again surpassed the bar of 1,000 new cases per day on Wednesday, as well as recording 19 new deaths. Ontario reported 790 cases.

In Manitoba, Premier Brian Pallister announced the province was hiking the fines for individuals and businesses who disregard public health orders aimed at stopping transmission of the virus.

The province reported 135 cases on Wednesday, with most located in Winnipeg.

Alberta reported its highest daily case tally on Wednesday with 406 new cases, just as it was announced that Premier Jason Kenney was isolating at home as a precaution while being tested.

Other politicians were also isolating after the province's municipal affairs minister tested positive.

Both Drouin and Ontario Premier Doug Ford expressed concerns over the impact the second wave of the pandemic is having on mental health, particularly for children and young adults.

Drouin told reporters in Montreal that more than 45 per cent of young adults reported mental health impacts due to the pandemic, which is higher than in other age groups. Young adults were also more likely to report having lost their jobs or having trouble paying bills, she said.

Ford announced his government was allocating over $24 million of his government's $176 million mental health commitment for specialized mental health services for children and youth, including money to increase access to counselling, support for programs aimed at youth, and eating disorder intervention.

There was good news on the testing front as procurement Minister Anita Anand said Canada has received a first shipment of 100,000 rapid tests for COVID-19.

Anand confirmed the delivery of the ID Now kit, which can provide results in as little as 13 minutes on the spot where the patient is tested.

She said on Twitter that the country is on track to receive more than 2.5 million of the tests by the end of the year, and that delivery of a second rapid test, the Abbott Panbio, should begin to arrive shortly.

The news on testing was overshadowed by a confidence vote in the House of Commons that had threatened to trigger an election and upend the government's pandemic recovery plans.

In the end, the minority Liberals survived the vote as a majority of MPs voted against a Conservative motion to create a special anticorruption committee to investigate the WE Charity affair and concerns over pandemic-related spending.

The NDP and Green Party both prevented the government's fall by voting against the motion, with leaders of both parties expressing their opposition to plunging the country into an election when it needs to focus instead on helping Canadians recover from the pandemic.

This report by The Canadian Press was first published Oct. 21, 2020

COVID-19 restrictions ramp up in Canada