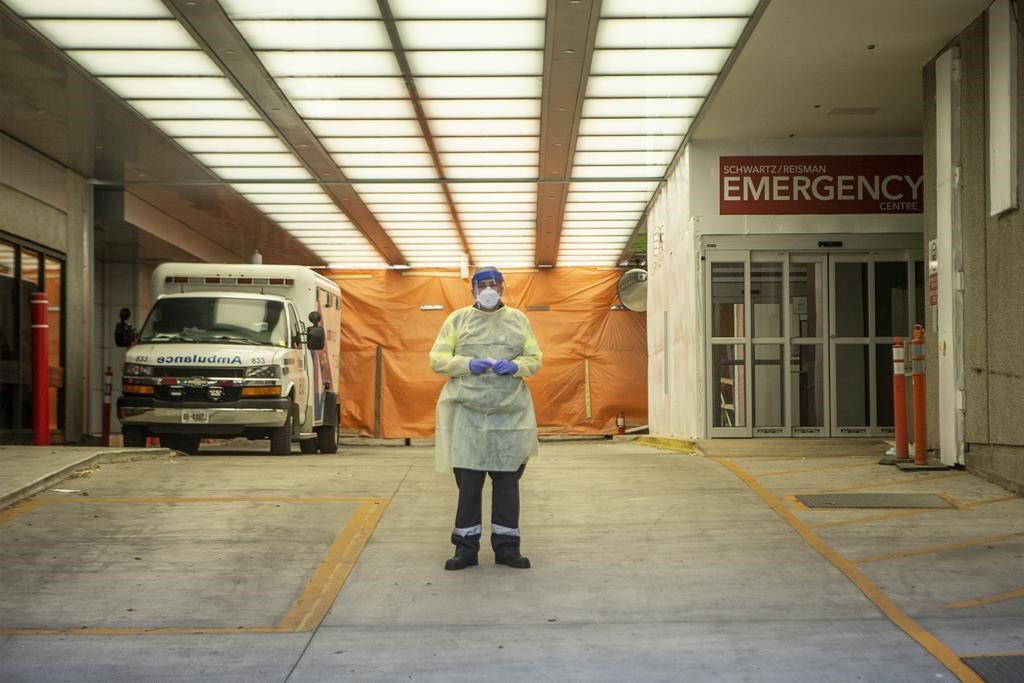 A paramedic stands in the ambulance bay of Mount Sinai Hospital in Toronto, on Saturday, June 6, 2020. File photo by The Canadian Press/Chris Young
Previous story
Next story

Hospitals and long-term care homes are nearly at capacity and won't be able to handle a surge in COVID-19 patients during the second wave of the pandemic, an independent commission has heard.

While there are plenty of physical spaces set to handle an influx in patients, which include many field hospitals ready to go, there is no one to staff them, the Ontario Hospital Association told the Long-Term Care COVID-19 Commission earlier this month.

That leaves hospitals across the province with only one quick solution, which they have dubbed the "dimmer switch" — shutting down elective surgeries once again to free up more beds and staff, the association said.

The commission, which is investigating how the novel virus spread in the long-term care system, isn't open to the public, but transcripts of testimony are posted online days later. The hospital association testified on Oct. 5, and the transcript was posted two weeks later.

Barbara Collins, the CEO of Humber River Hospital, testified that about 5,000 hospital patients in the province could be transferred to long-term care homes to continue their recovery. But those homes, she said, have no room, partially due to a government rule that limits use of three- and four-bedroom wards, which proved deadly during the first wave of the pandemic.

"We survived last time, largely because we cancelled surgery," Collins told the commission.

"It is being spoken about as a dimmer switch this time."

That option, which led to a backlog of nearly 200,000 surgeries in Ontario, remains the best — and potentially only — option for hospitals to quickly free up space and staff to handle a rush of COVID-19 patients, she said.

In the early days of the pandemic, the province focused on creating space in hospitals, but the COVID-19 surge occurred in long-term care homes, the commission has previously heard.

In addition to cancelling surgeries, hospitals moved as many patients as possible to long-term care facilities in February and March, said Gillian Kernaghan, the CEO of St. Joseph's Health Care in London, Ont.

That set the stage for the novel coronavirus to tear through the homes with deadly effects.

"It meant that when long-term care started to see cases with COVID, they had no places to isolate people because they were full," Kernaghan said.

Many long-term care homes were overrun by COVID-19, especially in March and April before the province finally launched its action plan to deal with the catastrophic outbreaks in nursing homes.

To date, 1,910 long-term care residents have died of the disease.

Now, with elective surgeries back on, hospitals are near capacity, said Anthony Dale, the association's president.

And this time around, the health-care system faces another crisis: staffing.

"The challenge is that long-term care homes, hospitals, home care, are all facing human resource shortages right now, and so it is not actually the physical capacity we are worried about right now," Kernaghan said.

She said the province's directive to only allow staff to work with one employer has also contributed to the human resource crisis in long-term care homes.

"We probably had 10 to 12 homes that we worked with very actively every day for whom staffing crisis was precipitated by the single-employer directive, and more commonly the person picked the hospital to work in because of lots of reasons," Kernaghan said.

"And this is when it became somewhat ridiculous, because what we then had to do when we had a staffing crisis, we went to the hospital. They sent the same staff member back technically as a hospital staff member to solve the problem in the long-term care home."

Dale said he would like the province to rethink it's single-employer edict.

"Staffing shortages, as the members have said, remains a very significant issue, particularly in long-term care, so we do recommend a thoughtful re-evaluation of the universal application of the single-employer policy," he said.

Dale also warned that the current setup to fight COVID-19 in Ontario, which relies heavily on hospitals and their staffs, is "precarious."

"There is a huge amount of risk uploaded into the system, and with our colleagues in long-term care facing the challenges that they are, even with the assistance of hospitals, this is quite a precarious situation, and it is why we have been so aggressive in calling for new public health measures to stop community spread," Dale said.

There are "historic high numbers" of patients now in hospital who do not need to be there, but have nowhere else to recover, he said.

Kernaghan said there is no ability to ramp up staffing at both hospitals and long-term care homes in rural Ontario, partially because there is no child-care help.

"In many of our rural regions, there is no staff to hire," Kernaghan said. "It is not for lack of trying, I can assure you."

The staffing challenge in cities is different, she said, with many staff having to stay home if their child is sick with COVID-19 or have been exposed to the disease.

This report by The Canadian Press was first published Oct. 23, 2020.