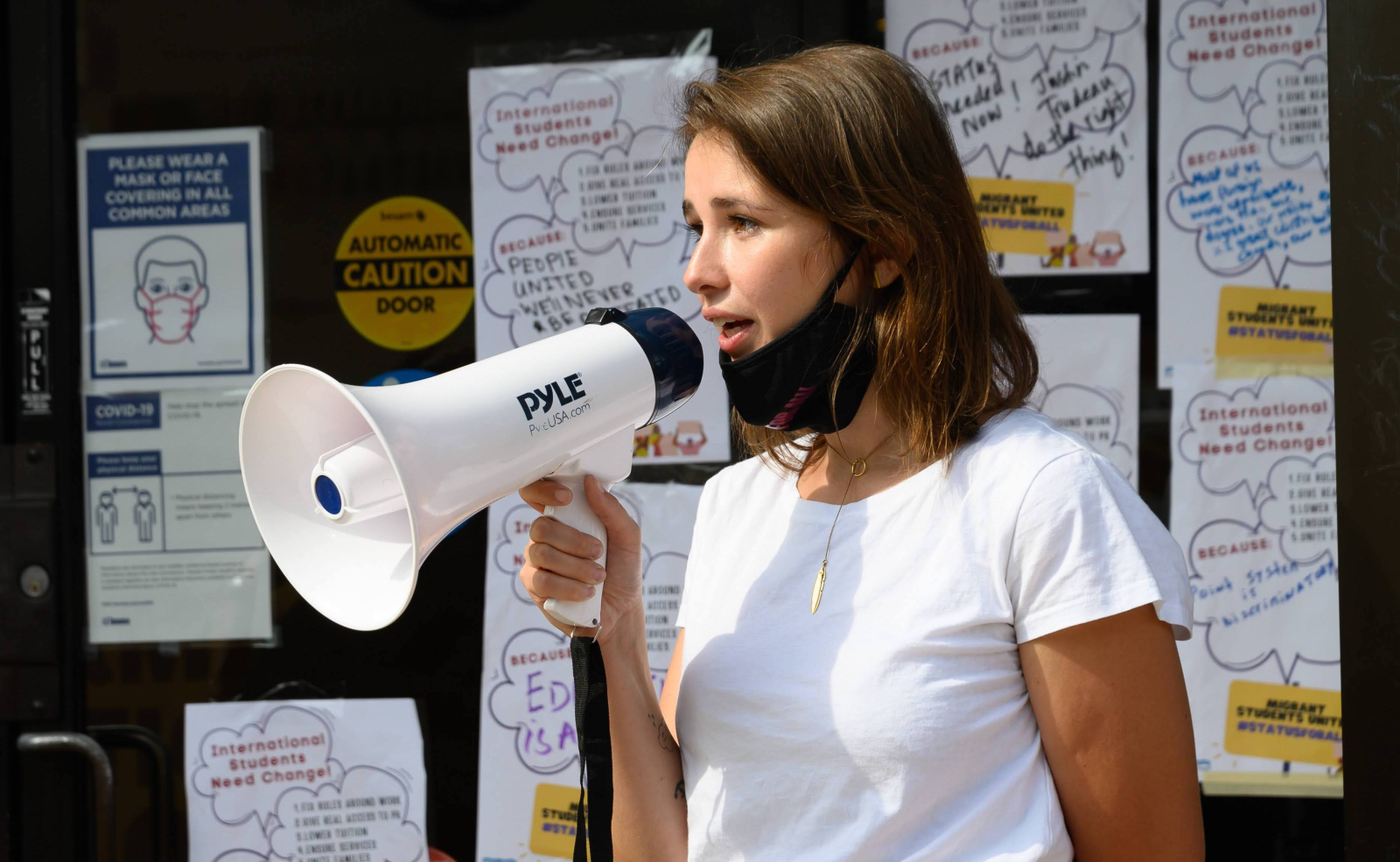 Thousands of students who came to Canada recently with hopes they could move from school to permanent work and residency instead face falling into the cash economy or deportation without an urgent fix from Ottawa to what they say is a Kafkaesque immigration system.

One of them is Alina Przybyl, who worries she will be unable to find enough of the right kind of work to secure her life in Canada amid COVID-19 restrictions and a tight labour market.

“I really want to get into front-line work,” said Przybyl, who graduated in April from George Brown College with a social work diploma and plans to counsel assaulted women and children.

It is a predicament that could ensnare some 17,000 students and recent graduates holding expiring permits, whom activists say could be forced to leave by the end of the year.

To protest that point, Rho, Pryzbyl and other migrant worker and student activists installed a three-metre-high postgraduate work permit at a downtown Toronto immigration office on Sunday.

The students and activists were calling on Ottawa to make postgrad work permits (PGWP) renewable, and want the federal Liberal government to make several other adjustments to the immigration system due to the pandemic.

International students with, or approved for, a study permit who will be attending a designated learning institution with a #COVID19 readiness plan approved by their provincial or territorial government may be able to travel to Canada. pic.twitter.com/MzPCiyW58H

Under the current rules, Przybyl, a migrant student from Poland, says she needs to find full-time permanent work in her field or another highly qualified position for it to count towards requirements for an eventual permanent residency application.

International students and activists from @MWACCanada presented an oversized postgraduate work permit at the offices of @CitImmCanada, saying they need them renewed amid COVID-19.

But most of the available jobs in her field are temporary or part-time positions, she said, acknowledging that domestic students face the same dim prospects, but without such heightened consequences.

“I feel like I'm completely detached from reality and there is someone making up weird immigration rules that don’t work for me and definitely don't work for Canada,” she said.

Przybyl was working as a waitress in the restaurant at Bodega Henriette when the pandemic hit. She got another job in August, but her new employer couldn’t offer more than 15 hours a week and tighter restrictions reintroduced in Toronto two weeks ago ended that, too.

Rho said that with processing times stretching out much longer than before, some recent graduates are still waiting to hear back about their postgrad permit applications, meaning they do not hold an active social insurance number (SIN) and cannot legally work or claim unemployment or pandemic relief benefits.

“For students and workers, all migrant workers, because we don't have equal status, it creates conditions of vulnerability and exploitation” by those who try to “make profit off of precarity,” said Rho from Migrant Students United, which is part of the Migrant Workers Alliance for Change.

The plight of young people poised to join the ranks of Canada’s educated workforce before the pandemic hit is a key test of the Trudeau government’s commitment to ensuring both social justice and economic resiliency, the activists say.

Rho pointed out a member of Migrant Students United in Halifax, where there is a shortage of educational assistants, was offered an EA job, but couldn't take it because it would not count towards the work experience she needs to present to Canadian immigration if she wants to stay on.

The office of Immigration, Refugees and Citizenship Minister Marco Mendicino said in response to queries that Canada has taken a number of steps to limit the challenges facing immigrants and newcomers.

Alexander Cohen, Mendocino’s press secretary, said those steps include extending the deadline for migrants to update lapsed permits until the end of the year (and allowing them to work while those applications are processed), creating a process for workers who need to change jobs quickly, and allowing visitors to apply for a work permit without leaving the country or providing biometrics.

But Cohen did not say whether the government plans to allow the renewal of one-time PGWPs, or if it would reduce the number of hours or ease other restrictions, either temporarily or permanently, to help bridge that post-grad gap to permanent residency.

Cohen referred a question about lowering tuition rates to provinces, who are responsible for education and said the federal government was "exploring more ways to adapt to the current situation and create the flexibility to respond."

Editor’s note: This article was updated at 12:59 p.m. Eastern time on Oct. 27, 2020 to include a response from the immigration minister’s office.