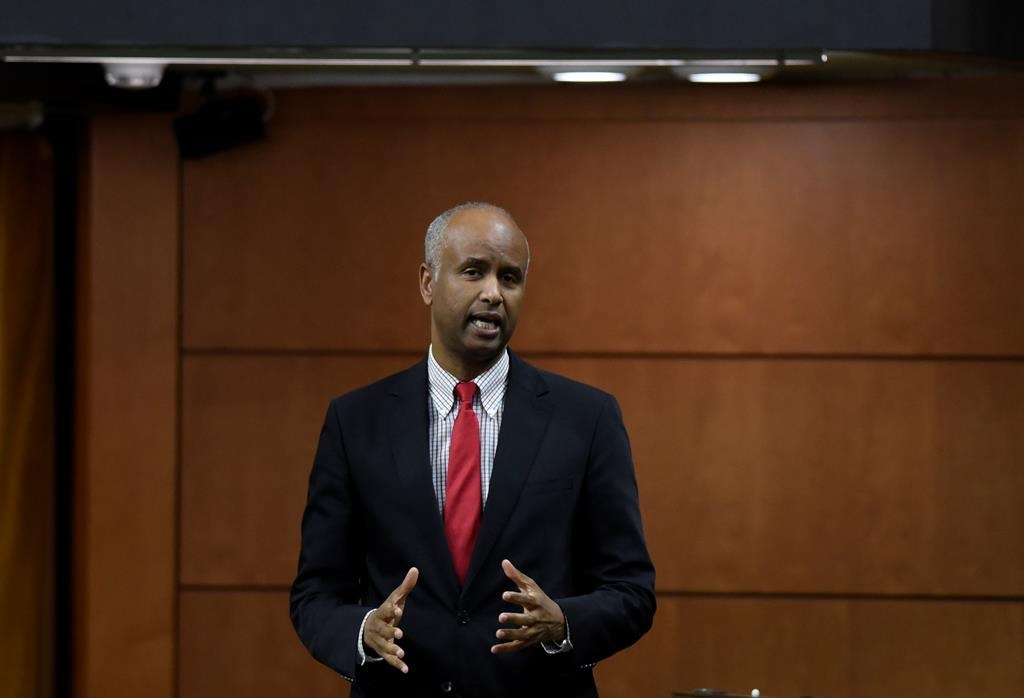 Minister of Families, Children and Social Development Ahmed Hussen rises during question period in the House of Commons on Parliament Hill in Ottawa on Tuesday, Sept. 29, 2020. THE CANADIAN PRESS/Justin Tang
Previous story
Next story

OTTAWA — Fifteen cities will share $500 million in federal funding so they can buy properties being sold because of the COVID-19 pandemic and use them to help keep people from becoming homeless.

Canada’s biggest city, Toronto, will get the largest slice of that funding pie with about $203 million, with funding also going to Vancouver, Montreal, Ottawa and Edmonton to help their housing providers find places for people in time for winter.

A further $500 million will be up for grabs for projects that will have to be completed within 12 months of federal officials giving the green light for funding.

The money up for grabs is in high demand, with some cities already laying out buying strategies and prepping to apply for the project-based funding stream.

Edmonton Mayor Don Iveson said once those applications are in, cities will be telling the federal Liberals that both pots of money will need to be topped up.

"But the best way to make that argument is to use up the two $500-million allocations quickly, which we intend to do," said Iveson, who chairs the big-city mayors group of the Federation of Canadian Municipalities.

The government considered the program for months as a way to keep people from falling into homelessness heading into the winter, with temporary shelter measures for the COVID-19 pandemic set to expire.

Some cities have rented hotel rooms to accommodate people while shelter capacity is reduced to allow for physical spacing, but they’re badly stretched financially.

Toronto Mayor John Tory said in a statement his city needed to pool the money with municipal funds as well as dollars from the private and non-profit sectors "to get affordable housing built as quickly as possible in our city." He added that work is underway on a 12-month investment plan to properly put the funding to work.

Social Development Minister Ahmed Hussen said cities have already identified properties to buy, or have plans for modular housing that can be built in a matter of months, leading him to say Tuesday that he expected to see "a lot of housing being built before the winter."

Hussen has previously said he hopes to have most of the money spent before March 2021, when the federal fiscal year ends.

The figures the federal government provided Tuesday add details about the Liberals’ plan to create or purchase 3,000 new #affordablehousing units across Canada. Cities had estimated a need of about 12,000 units. #cdnpoli

The figures the federal government provided Tuesday add details about the Liberals’ plan to create or purchase 3,000 new affordable housing units across Canada. Cities had estimated a need of about 12,000 units.

"The cold, wet weather is upon us. Tent cities are occurring all throughout the country. An allocation of 3,000 units will not even come close to addressing the homelessness crisis," NDP housing critic Jenny Kwan said in a statement.

The federal funding will cover purchase and construction costs, but the dollars needed to operate the new units will have to come from provincial or municipal coffers.

At the moment, municipal coffers are already stretched from the pandemic. Revenues dropped as recreational facilities sat unused and ridership diminished on transit systems, and costs increased for extra cleaning and emergency services.

The Liberals sent $2 billion to cities through a "safe restart" agreement with the provinces last month, and promised to match up to $2.3 billion more in provincial money for transit systems.

The money helps cities until the end of March, but municipal councils are looking at their budgets for 2021 with questions about how a second wave of COVID-19 may affect their bottom lines, Iveson said.

Intergovernmental Affairs Minister Dominic LeBlanc said Tuesday there were no immediate plans to provide more funding to cities, unless provinces made the case that more was needed to avoid service cuts.

"You wouldn’t want a situation in the context of the pandemic that these services were less available or somehow were diminished at a time when people need the most," LeBlanc said.