How a Depression-era jobs program could help the U.S. tackle global warming 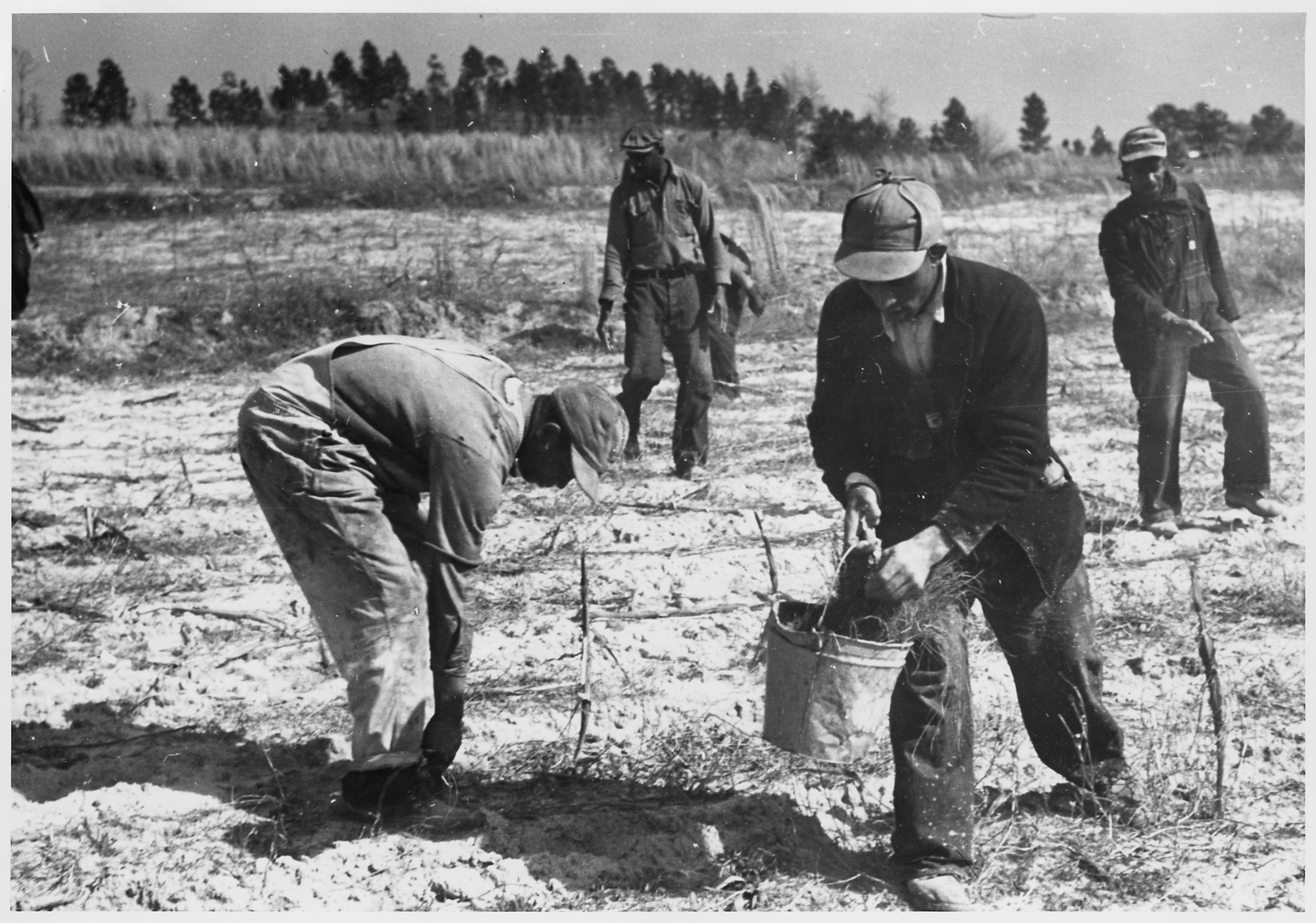 In 1933, with the country deep in the Great Depression, the United States government created the Civilian Conservation Corps, a work program that gave young men jobs transforming the American landscape. They built trails and roads, fought fires and maintained critical infrastructure, among many, many other projects.

“The CCC was absolutely massive,” says environmental economist Mark Paul of the New College of Florida. At its peak, it employed half a million workers — over its nine-year lifetime, the total figure was three million, about five per cent of the U.S. male population at the time. “So it's really a kind of hallmark program in American history that provided youth with economic opportunity while bringing them close to nature,” he continues.

In 2020, we face massive unemployment and a host of environmental problems that need fixing: wildfires in the West, flood-prone areas along the Gulf of Mexico, all manner of dams on the verge of collapse. Nearly a century after the original CCC came into being, some folks argue it’s time to bring it back.

So say Americans themselves: recent polling shows that 80 per cent of Democrats and 74 per cent of Republicans favour a return of the CCC. Joe Biden has proposed something akin to the CCC if elected: the Civilian Climate Corps. Workers would manage forests, restore ecosystems and even remove invasive species.

In September, Illinois Sen. Dick Durbin introduced the RENEW Conservation Corps Act, which would spend US$55.8 billion over five years to put a million Americans back to work, doing things like wildlife surveys and monitoring water quality. And last year, Ohio Rep. Marcy Kaptur introduced the 21st Century Civilian Conservation Corps Act, which has yet to pass the House but proposes rehabilitating environments and updating trails and facilities throughout the country’s natural spaces.

Kaptur sees some participants as working in their local communities, while others up for travel might move around the United States.

“If we give them an opportunity to broaden their horizons, and at the same time restore America in some of its hidden corners and neglected places, what a great gift to the future,” she says. “I don't know a single person — including my own father, who worked for the Civilian Conservation Corps as a very young man — who wasn't changed and elevated by that experience.”

Representatives from Biden’s campaign and Durbin’s office did not return requests for comment by press time. But in a release announcing his bill last month, Durbin invoked the challenges of a pandemic year: “America’s outdoor spaces have provided recreation for generations, and this year we’ve seen how important and valuable they’ve been to countless Americans looking for a respite,” he stated. “If we are to leave these natural gifts to the next generation, we have to take responsibility in protecting them.”

Several U.S. officials have argued for a revival of the Depression-era Civilian Conservation Corps with a focus on climate-related jobs like wildfire management, revitalizing public green spaces and restoring wetlands and forests. #climatechange

And it’s probably safe to say that the interest in resurrecting a venerable work program has something to do with the CCC being as American as periodic economic collapse.

“The CCC was something that I think has that kind of broad support largely because of its historical precedence in the U.S.,” says Paul. “We don't have to look to Norway or Sweden or Finland to think, ‘How are they doing this?’ We can just look back to U.S. history and see this wildly successful program.”

Whatever the iteration, a revival of the CCC would simultaneously tackle the problems of environmental degradation and economic doom. Simply put, the idea behind putting people back to work is to also get them to spend money again, juicing the economy by boosting aggregate demand, or the desire for goods and services.

“If you actually take a broader definition of unemployment and count people who are making below a living wage, we're talking about 25 per cent unemployment right now in the U.S., for people that are either out of a job, have a job part time, or are getting paid poverty-level wages,” says Paul. “We can actually put folks to work, provide them with not only a means to make a living, but also with an ability to contribute to their communities in ways that benefit not just them, but the community writ large — and in this case, the environment as well.”

Take California’s plight, for example. This summer, five of the six biggest blazes in state history burned across the landscape. In total this year, over four million acres across the state have gone up in flames, claiming 31 lives and 9,200 structures.

California’s flaming apocalypse is the spawn of two colliding factors. One: climate change has made the landscape drier than ever, turning dead brush into tinder. And two: decades of fire suppression — squelching wildfires quickly, before they grow too large — has led to a buildup of that kind of tinder. In a healthy ecosystem, every so often a wildfire would come through and clear all that out. But with more and more people living in the forested mountains of California, the state can’t afford to let wildfires burn and obliterate towns.

After the 1989 earthquake that rocked the Bay Area, California’s government bodies, companies and citizens have “spent about $70 billion on earthquake retrofits for buildings. And that earthquake itself only caused about $10 billion in damages,” says Zeke Hausfather, a climate scientist and the director of climate and energy at the Breakthrough Institute, which advocates for climate action.

“Now, we've been having tens of billions of dollars in damages every single year for the last five years from wildfires in California. And yet, we still have only spent less than $10 billion on effective forest management. So the scale of our response is not really commensurate to the scale of the problem.”

Part of the solution is fuel management, which involves crews either mechanically clearing out brush with heavy equipment like tractors, or setting controlled burns. But California doesn’t have the money or the people required to fully manage the landscape. Plus, the federal government manages 60 per cent of the state’s forests, anyway.

Private landowners interested in using controlled burns to clear brush can work with the California Department of Forestry and Fire Protection, also known as CalFire, which runs a vegetation management program.

Under a plan signed in August, the U.S. Forest Service would work with the California Natural Resources Agency (neither returned WIRED’s requests for comment) to thin out a million acres of landscape a year by 2025, double the rate of thinning as it stands now.

But popping up across the state is a glimpse at how a new CCC might help California in its struggle against wildfire fuels: prescribed burn associations, which aim to prevent out-of-control blazes by pre-treating the landscape.

About two years ago, Lenya N. Quinn-Davidson, area fire adviser for the University of California Co-operative Extension, co-founded the Humboldt County Prescribed Burn Association. The group’s experts craft prescribed burn plans for owners of private land, and local volunteers do the actual work. The association has 90 members, and can easily pull 30 people to do a controlled burn.

“It really is a social movement around prescribed fire,” Quinn-Davidson says. Since their founding, a dozen other similar groups have formed across California. “It's a great grassroots, local model of people helping each other out, and getting the work done virtually for free,” Quinn-Davidson adds.

These folks aren’t getting paid, but hell, they should. These are the kinds of jobs a revamped CCC could fund and manage. “There is a huge need for actual jobs, especially in rural areas,” Quinn-Davidson says. “What an opportunity, if we could direct funding toward job creation around fuels and fire management. That would make so much more sense.”

It’d make particularly good sense given the brutal economics of the pandemic. The federal government works just fine running at a massive deficit — that’d be $3.1 trillion this year.

“Local governments just don't have the ability to deficit spend the way the federal government does,” says Paul, of the New College of Florida. “So we're going to see some pretty massive cuts in the upcoming state budgets.”

Money from the feds could flow both to local initiatives like prescribed burn associations and to the U.S. Forest Service, which is sitting on a backlog of millions of acres in the West in need of management because the agency doesn't have the money or people to actually do it.

A revived CCC could pour money into tackling a bevy of other environmental problems, too. Revitalizing public green spaces, for instance, benefits all Americans. We urgently need to better prepare our coastlines for rising seas. Restoring wetlands and forests would pull double duty, returning ecosystems to their former glory and creating carbon sinks: plant more trees and you can sequester more CO2 from the atmosphere. Actually, in the case of wetlands, make that triple duty—healthy wetlands work as flood control during hurricanes, absorbing surges of water.

Biden’s plan, specifically, calls out the need for planting more trees within cities to counter the heat island effect, in which concrete jungles soak up the sun’s energy and release it slowly throughout the night, resulting in significantly higher temperatures than surrounding forested areas. On a warmer planet, Americans will need all the help they can get to stay cool.

Reviving the CCC would also give the U.S. the opportunity to confront the wrongs of the original program.

“I don't want to shy away from the fact that the program does have a troubled history,” says Paul. “For instance, as was the case with many programs at the time, it was racially segregated.” The program was male-only, too.

If the U.S. were to bring the CCC back, Paul adds, we’d need to “make sure that we learn from those historic wrongs and make it in an equitable and accessible program for all.”

Green jobs for youth the key to pandemic recovery in Canada

Electric cars, heating could save the climate and $2,500 per U.S. household