Oyster farmers getting battered as COVID-19 dries up restaurant market 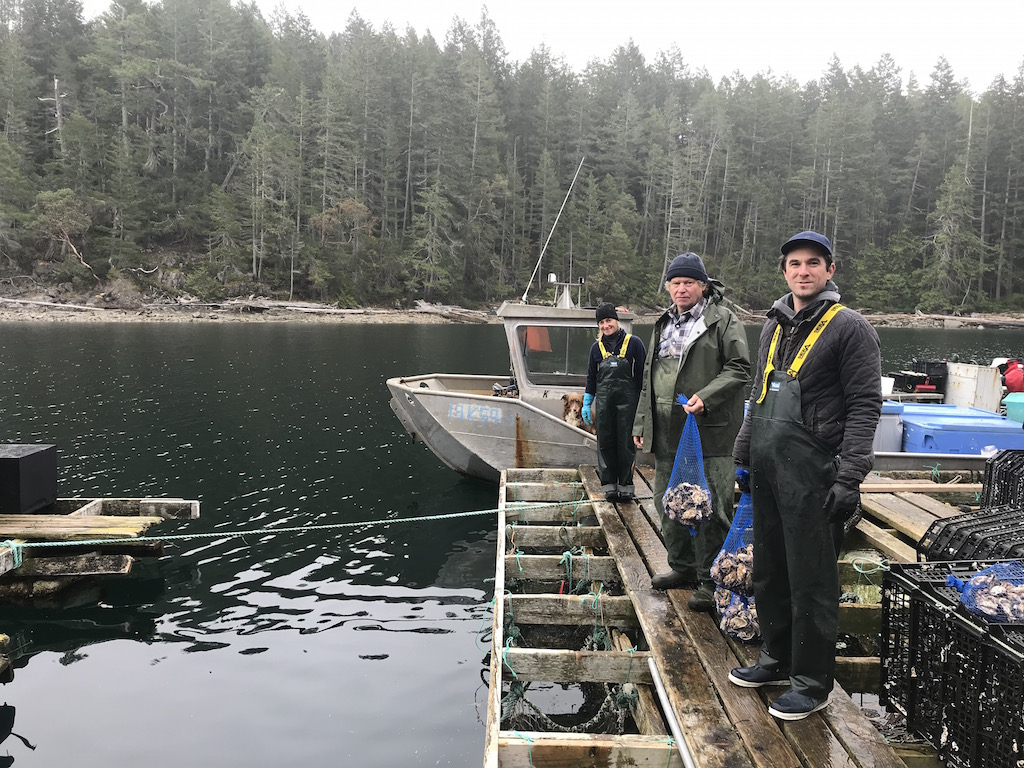 Oyster farmers know grit can make for a good pearl.

But shellfish farmer Victor McLaggan’s tenacity is being tested as the pandemic continues to hobble the restaurant industry, the main source of his income.

McLaggan’s niche market is selling direct to high-end restaurants across Canada, ones with tide-to-table ethics that want to know exactly where their product is coming from.

But like most producers of smaller live oysters destined for the half shell, McLaggan says he’s taking a beating as COVID-19 protocols continue to force eateries to limit operations or shut their doors altogether.

“We bet heavily on the restaurants,” said McLaggan, co-owner of Outlandish Shellfish Guild in the Discovery Islands.

“And we haven't exactly been able to fill the void with another style of customer,” he said.

Shellfish aquaculture is a valuable contributor to B.C.’s coastal economies, and oysters reign supreme in comparison to other bivalves, such as clams or mussels.

The situation for shellfish growers isn’t likely to get better before it gets worse. B.C.’s provincial health officer, Dr. Bonnie Henry, has officially declared the province is seeing its second wave of COVID-19, along with Ontario and Quebec. And on Monday, B.C. reported a record 817 new cases over the weekend’s three-day reporting period, the highest since the start of the pandemic.

Restaurants, pubs and bars are struggling to generate enough revenue now that liquor sales in the venues must cease by 10 p.m., and seating is limited because of physical distancing protocols.

“Normally, we’d be shipping a couple of pallets to Toronto and to Montreal, but that’s non-existent right now.”

Many restaurants won’t place orders because they fear the quantities they need are too small, or they are reluctant to pay ahead of time for product when business is so uncertain, he said.

“We're trying to keep the pieces in place and be there when COVID-19 slows down, but we’ll have to figure a few things out, I guess.”

The company is squeaking by selling oysters and clams to seafood shops and a few restaurants on Vancouver Island that are still open beyond the summer season.

McLaggan also hopes to shift gears somewhat to develop some access to the export market or sell directly to local customers.

But the logistics around developing packaging, meeting protocols and delivering to local customers is tricky, especially when you have already had to winnow down your workforce, he said.

Larger producers and shellfish wholesalers have also taken a hit along with restaurants, said Sally Kew of Mac’s Oysters on Vancouver Island.

The U.S. market is the largest export market for B.C. shellfish.

And the initial months of the pandemic saw a significant drop in volume headed down south, said Kew.

“In the beginning, we could have probably taken the shipment down in a Volkswagen bus,” she said.

“Everyone was slow, so naturally, so was the shellfish industry, as every other industry,” Kew said.

But though sales are down from last year, orders have rebounded somewhat, she said.

The market for larger shucked oysters typically sold in plastic tubs in Canadian supermarkets was unaffected by the pandemic, Kew said.

“We can’t meet the demand for shucked oysters,” Kew said, adding the majority of farmers produce the smaller live oysters because they take less time to grow.

Clam sales also took less of a hit than oysters in the shell because people feel comfortable taking home a bag and steaming them up, she said.

However, the retail market is limited for oysters in the shell, she added.

“When you go to a restaurant, they present them on a platter and you have your wine or champagne,” she said.

“But I don’t think a lot of people want to get a knife and learn how to shuck an oyster at home. The magic just isn’t there in the same way.”

McLaggan said folks might also be hesitant to put oysters into their regular rotation for meals just because they’re not accustomed to cooking them.

“I think there needs to be more education about how great they are,” he said.

“When I take a whole live oyster and put it on the barbeque and dress it up a bit, they love it.”

Oysters also have the added benefit of a smaller ecological footprint in comparison to other types of farming, he said.

Shellfish farming doesn’t require a lot of energy input, and they filter their food directly from the ocean.

But despite the benefits of oysters, McLaggan and Kew feel they can’t predict a market upturn any time soon.

“After the second wave, no one is really sure what is going to happen,” McLaggan said.

“You know, we’re trying to get a feeling for it, but we still don’t have a complete plan.”