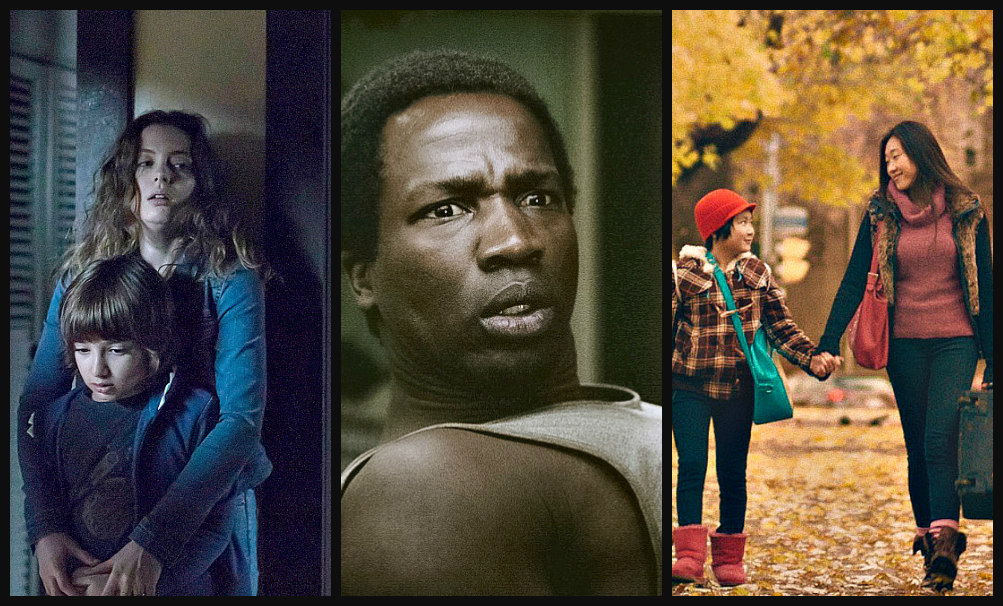 They include citizen scientists, trauma healed and a rare genetic condition.
Previous story

Star Wars fans are probably happy. A second season of the spinoff series, The Mandalorian, starts on Disney+ today. Ever the promoters, the company has a short video on YouTube starting with Werner Herzog and recapping the first season.

In the theatres this week, you’ll find a lot of horror movies in time for the spooky night. A lot of them are recent titles like the Conjuring and Annabelle films, while the Rio has interesting selections, including Carrie and The Exorcist, leading up to an in-theatre viewing of what it calls “the most spine-tingling of them all,” the U.S. election on Tuesday.

The Cinematheque has one last film in a series of Japanese horror flicks, Audition, made by Takashi Miike. It calls it “one of the most infamous nerve-shredders in horror-movie history.”

If you go to the website to read about it, stay for the notes on the Federico Fellini films Cinematheque is showing starting Sunday to mark the 100th anniversary of his birth. They start with La Dolce Vita, naturally, and will be showing all his big titles and some obscure ones in the series that will go on into December.

Queen of the Morning Calm: 3½

The True Adventures of Wolfboy: 2½

COME PLAY: “There’s something in the house.” Ah, that familiar forewarning we’ve heard in so many horror movies is back again, but with a few new elements this time. Sure, lights go off and on, and doors open and close by themselves immediately before. The words, though, are spoken by an artificial voice on a smartphone activated by a young boy who can’t speak himself. He’s afflicted with autism, shunned at school and desperately lonely. He spends most of his time online and becomes another kind of victim. Something is trying to contact him, a demonic creature named Larry from a children’s book.

Larry is also an outcast, just wants a friend and will terrorize to get one. And that he does. He’s just a spectre through most of the film, and puts messages onscreen that if anyone dares get in his way, “they’ll surely face their end.” Suspense and tingly thrills build as mom and son have to hide from him. Dad has inexplicably gone away; a plot point that comes on far too suddenly. Family problems often drive these films, and this one adds that new fear of technological control. The film is scary, but gentle enough for most kids, and features a nice performance by Azhy Robertson as the boy named Oliver. He conveys a lot without being able to speak. Gillian Jacobs and John Gallagher Jr. play the parents, and the director, Jacob Chase, originally told the story in a short film. It’s hardly innovative, but is effective. (5th Avenue, Scotiabank, Marine Gateway and suburban theatres) 3 out of 5

SPELL: Here’s a scary movie with something new. It’s more truthful than usual about Black American society. There are distinct class divisions in that the family here is definitely upper middle class. The father is a rich lawyer, who flies his own private plane. He’s cut off from his history, and when he gets word his father has died, is forced to reconnect with it and encounters far more than he wanted.

Omari Hardwick plays the man with the grand name, Marquis T. Woods. He has been estranged from his dad and his Appalachian home since he was a kid. On his way to the funeral, he crash lands, wakes up in a woodsy home tended to by a nice lady, but with no word on what happened to his wife and two kids, who were also on the plane. Slowly, a scene of ancient magic is revealed to him, and though it seems benign, in that Ms. Eloise (Loretta Devine) is nursing him back from a leg injury, it turns sinister. She uses a voodoo figure she calls Boogity, which she made out of his blood and skin. She presides over a sacrificial ritual in a barn, and she keeps him trapped. “Your better self is calling you,” she tells him and promises a resolution during the “blood moon” in a few days. She’s not played villainous enough, but the Southern Gothic atmosphere is thick and the primitive spiritual tradition is fascinating. Together, they’re highly involving. It’s an American story directed by a Brit (Mark Tonderai) in South Africa. (Available on premium video-on-demand and in a few theatres, though none that I know of around here) 3½ out of 5

HIS HOUSE: The third scary movie this week joins in with a recent trend: using the conventions of horror movies to explore social issues. Here we follow a refugee couple from Sudan, who try to fit in with society in England. Not easy, is an understatement. Sope Dirisu and Wunmi Mosaku, as the couple, are welcomed warmly but tentatively by immigration officials. They have to live by onerous rules, and the council home they’re assigned is a garbage-strewn mess. Worse, at night there are clunks and noises in the walls and the paper falls off revealing holes in the drywall. There’s a demon of some sort in there.

It’s a tangible representation of asylum seekers suffering with trauma they’ve brought with them. Several flashback visions show what they lived through, including gunmen arriving in Land Rovers, boats capsizing in a dark ocean and their losing a young daughter on the trip. These dream sequences are chilling. There’s squalour in the house and racism outside, but the local contact (Matt Smith, the former Doctor Who and more recently Prince Philip in The Crown) says live with it. “Be one of the good ones,” he says. The film shows exactly how hard that can be. It is extremely well-acted and there’s plenty of uncertainty and empathy. British director Remi Weekes helmed it and also co-wrote the screenplay. (Netflix) 4 out of 5

QUEEN OF THE MORNING CALM: I’m not sure what the title means or why some of the things in this movie happen. But I enjoyed it anyway as a heartfelt exploration of one type of marginalized person. Debra is a single mother in Toronto trying to rise up from the sad life she’s living. She works as a stripper (and occasionally as a prostitute) to support her daughter. Problems keep coming at her. She’s being hounded for rent. The man who is the father of her child is away most of the time, losing his money in a casino, but talking big about an “opportunity” coming his way. He also claims to have always been “looking out for us … for our family.”

Gloria Ui Young Kim, former reporter at Maclean's and now a writer-director, has worked in incidents from her own life, and that’s probably why the film has a warm, authentic feel. You root for these people. Mom is studying to become an accountant and almost lands a job. Things happen, though, and others happen most every time she has a chance to improve her life. Her daughter, meanwhile, cries to have dad back in their life. She can’t see through his pretensions. The owner of an antiquities thrift store does help, although it’s not clear why. Not everything makes sense, but the story is moving anyway. Tina Jung, of CBC’s Kim’s Convenience, stars, and newcomer Eponine Lee makes a strong impression as her daughter. (Available to stream from VIFF Connect. Check viff.org) 3½ out of 5

HAPPY PLACE: Another film about overcoming trauma, with great emphasis, of course, on the suffering of it. It’s set in a private care facility where several women live, talk in therapy sessions and try to move on in their lives. We soon learn they’ve all tried to commit suicide. Samira, played by Clark Backo, was sexually assaulted and relives the memory in her dreams. A man with a crowbar comes down the hall and breaks in her door in these visions. She says she was tortured. “I don’t fit anywhere in the world,” she says. “I keep thinking there must be a way to bring back what I was before — but she’s dead.” The story is based on the real experiences of the writer, Pamela Mala Sinha, who created a one-woman stage show and then the script for this film. Helen Shaver directed it; her first full-length feature.

The other women in the group include Mary Walsh, Sheila McCarthy, Liisa Repo-Martell and Jennifer Wigmore, all with attitudes and stories of their own to tell. The main focus, though, is on Samira and her painful struggle to retrieve the details of what happened to her. That’s a common need among trauma victims. The film depicts it well, with an eerie chill in the flashbacks and with one compensation. It shows how the group, even arguing and disagreeing, comes together to support everyone in it. It’s hard to take at times, but moving when it counts. (Available Nov. 3 on digital and on demand) 3½ out of 5

MOONLESS OASIS: This is an intriguing documentary, short (only 45 minutes), but fascinating about what it tells us. First of all, there are citizen scientists who uncovered the details. They’re one step up from amateurs, but have technology and know-how, and discovered a unique cache while diving in Howe Sound. They found glass sponge reefs that date back to dinosaur times and were thought to have become extinct. Not so.

“It’s a hidden world that no one knew about,” one of them tells us. Apparently, these reefs are not found anywhere else in the world and it’s now urgent to protect them. They are powerful filters that clean the ocean water. That makes them more than just a curiosity; they do a job for us. The film takes us on the boat with a crew of these “scientists,” underwater with the divers and to planning sessions about the need to report infractions. Prawn fishermen throw traps down there not knowing the damage they may be causing. The film, directed by Nate Slaco, touts the find as “beyond science fiction.” (Oct. 31 on CBC, and after that on CBC Gem) 4 out of 5

THE TRUE ADVENTURES OF WOLFBOY: Here’s a well-meaning, but not-that-attractive, film with a message: Don’t reject people who are different; accept them. The problem here is a condition called congenital hypertrichosis, which causes excess hair to grow on the face and on the body. It’s rare, and it’s no wonder that people in this story are creeped out by the boy who has it. He’s an outcast at school, the kids gave him the name Wolfboy and joke that he’s a mongrel conceived by a father and a dog.

His mother is gone away, and when he gets a letter inviting him to come hear an explanation, he goes looking for her. He only encounters more heartbreak. Jaeden Martell is sympathetic playing him and Chris Messina does his best to be an understanding father. Chloe Sevigny, as his mother, has a very standard reason to tell when he eventually finds her. But it’s John Turturro who pumps up the cringe factor as a carnival impresario who lures him into working in a freak show. The point the film makes is valid. It just feels strained and uncomfortable. (Digital and on demand) 2½ out of 5

This article mentions a

This article mentions a number of cinemas, but without a proper byline, how are your readers supposed to know what city they're in? Irritating.