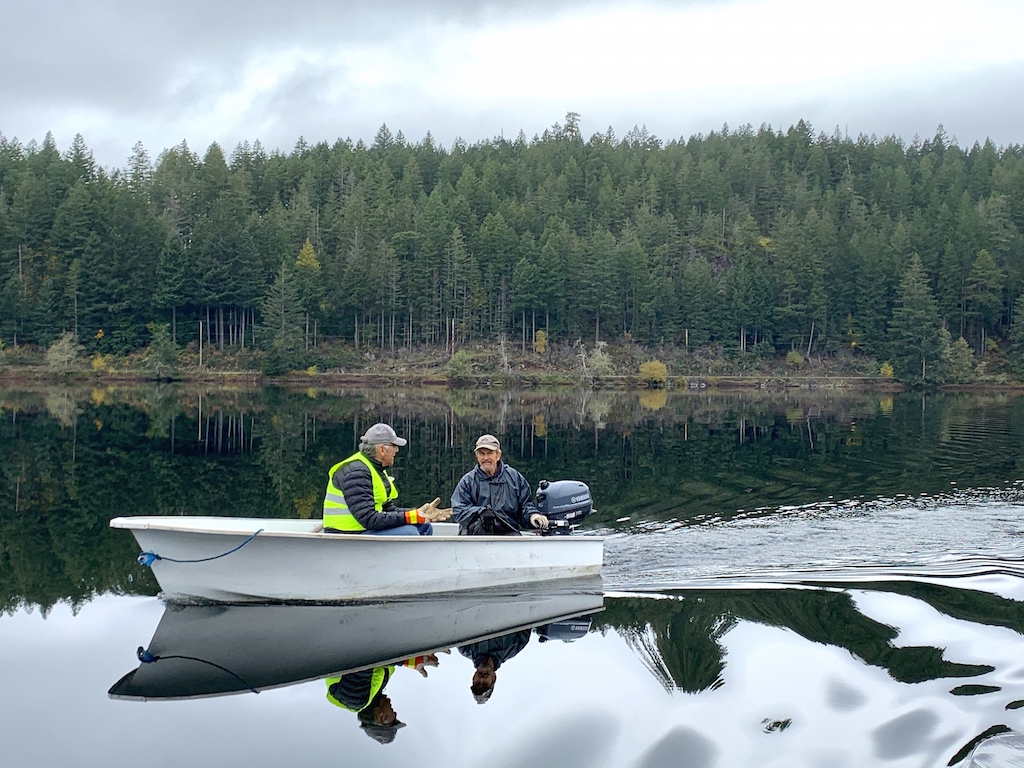 Streamkeepers on B.C.'s Quadra Island make their way to a creek accessible only by water to count spawning salmon. Photo by Rochelle Baker
Previous story
Next story

With just a little bit of arm flailing and much nonchalance, Frank Gleeson regains his balance after slipping on a wet rock lodged in a steep embankment along Village Bay Creek.

Gleeson and his buddy, Pete Calverley, continue to clamber over and under trees, scramble up slopes and wade through underbrush in their search for spawning salmon.

Gleeson and Calverley, aged 71 and 78, descend into a clearing at the creek’s edge and excitedly point out about 45 chum salmon milling not far from shore.

Gleeson and Calverley are members of the Quadra Island Salmon Enhancement Society, or QISES.

The volunteer group, established in 1978, runs a salmon eco-centre, monitors fish populations and conducts watershed enhancement activities on five of Quadra’s most productive spawning streams. The bulk of the group’s active members are seniors.

Calverley guffaws at the idea that such strenuous shenanigans might be too tough for the younger set.

“We have a little trouble recruiting the youngsters,” Gleeson acknowledges. “If they’re around, they tend to be working and not available.”

Most of the streamkeepers are either nature lovers or fishers, or have a scientific curiosity around salmon and how and why they flourish, flounder or return, Gleeson says.

Village Bay Creek, like most salmon streams on the island, mostly sees chum and coho runs from the beginning of October to mid-November.

It’s a short window of opportunity for the salmon enthusiasts to delight in the magic of the fish they work year-round to protect.

“We all kind of live for the fall,” says Gleeson.

Chum tend to linger and spawn in the lower reaches of the island’s watersheds, while the coho move through fast in a sprint upwards to the lakes and the smaller streams beyond, Gleeson says.

This year’s chum spawners are the result of a strong parent run four years ago, says Calverley.

The fish are impressively large, two feet long and likely weighing 10 pounds, but despite their size, the mottled grey fish are surprisingly hard to see along the rocky stream bed — unless they’ve spent longer in the fresh water, then the tell-tale white flash of decaying flesh makes them easier to spot.

Gleeson has been walking the Bay Creek for a decade, while Calverley has monitored various streams on the island for close to 40 years.

He has watched returns of chum and coho ebb and flow over the years, but overall, the population seems quite stable, he says.

“It goes up and down. It’s quite interesting,” Calverley says, noting Hyacinthe Bay Creek populations are presently good, while the Drew Creek watershed seems to be struggling.

But Calverley was one of the longtime islanders to witness the extinction of the sockeye run into the Village Bay lake chain.

“I probably saw the last decent run of sockeye back in the ’90s,” he says.

“It really wouldn’t be wise to try to bring that run back because the summer water temperatures are so high that they would never survive.”

Calverley says it was sad to see the sockeye disappear, but it hasn’t quashed his optimism that other runs can be preserved.

“Well, it's a shame. We have to be concerned about (the sockeye loss), that's for sure, but there’s some good-news situations, like the coho runs in the (Village Bay) lakes,” Calverley says.

“So that gives me cause for optimism,” Calverley says.

“The other reason I'm hopeful is, you know, we’ve done a number of things to improve returns.”

QISES is one of the hundreds of community and First Nations steward organizations that the federal government relies on to help monitor the health of salmon populations across the Pacific coast, says Andrew Pereboom of Fisheries and Oceans Canada (DFO).

The groups improve salmon habitat in local streams and provide invaluable data to DFO, allowing it to track salmon abundance in small systems over time, says Pereboom, who's involved in salmon stock assessments.

“These groups are massively important,” he says, adding it’s impossible for DFO to do restoration projects and monitor thousands of small creeks.

“Without streamkeepers, we probably wouldn’t get half this chum (data).”

DFO does provide some funding to streamkeepers to defray the costs for salmon enhancement projects, Pereboom says.

“But streamkeepers are super important because their hearts are in it, too,” he says.

Gleeson agrees the group is motivated and aims to punch above its weight in an effort to protect salmon.

“All the spawning takes place off in the little creeks,” he says. “It’s where all the action is.”