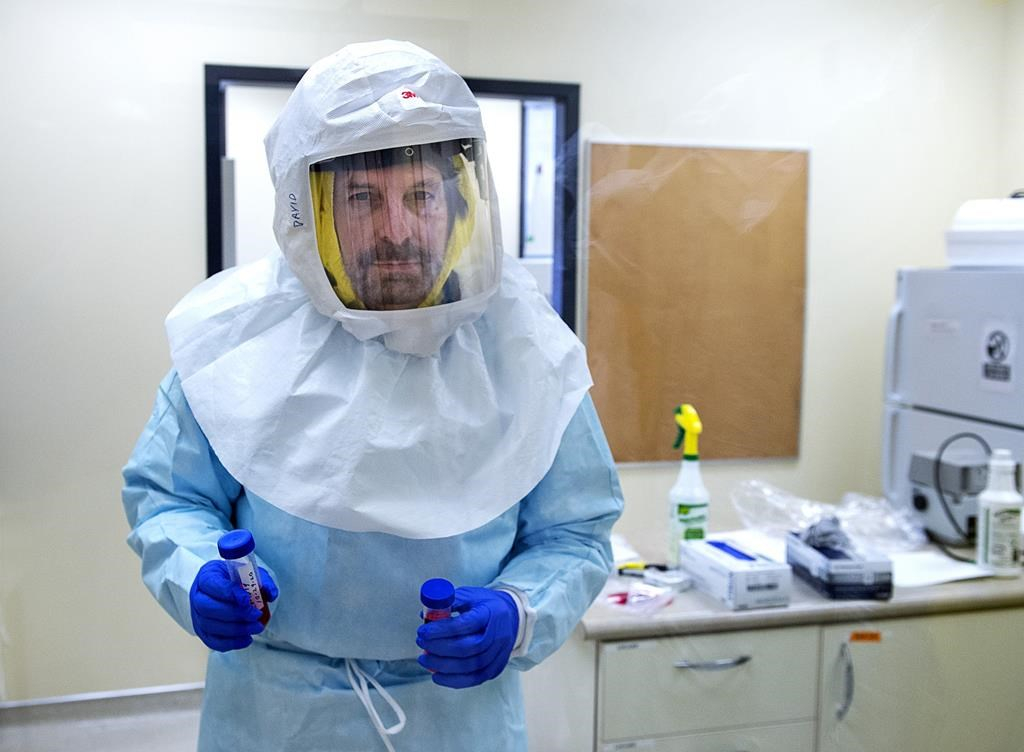 Dr. David Kelvin, a professor in the faculty of medicine at Dalhousie University, works in a lab in Halifax on Thursday, Oct. 29, 2020. Photo by The Canadian Press/Andrew Vaughan
Previous story
Next story

David Kelvin, a Dalhousie University professor of immunology, is co-author of a study that draws links between severity of the illness and the presence of large amounts of the virus's genetic material — ribonucleic acid, or RNA — in blood samples.

He and Spanish scientist Jesus Bermejo-Martin of the Institute of Biomedical Investigation of Salamanca led a group of 36 medical researchers tracking patients coming into Spanish hospital wards and ERs, and looking for about 30 so-called "biomarkers” in their blood plasma.

The work occurred during the first wave of the pandemic in the spring.

Though less publicized than research on vaccines, biomarkers are seen as key to tracking and predicting illness, and they can identify which proteins are being released that prevent the immune system from coping.

The study, which has been published online and is currently in the final stages of peer review for the journal Critical Care, concludes that the presence of the virus's RNA in blood is "associated to critical illness."

Kelvin says the work could lead to partnering with a pharmaceutical firm to develop standard and rapid blood-testing looking for the genetic marker in patients who test positive.

"A test is what we're hoping for," he said in an interview this week. "We need to develop ways to quickly know who should be placed in a ward, who should go in (intensive care) and who is well enough to go back home."

While North American hospitals often do test for the presence of the virus’s genetic material in the blood of severely ill COVID-19 patients, Kelvin says more rapid, standardized tests are needed for patients when they arrive in hospital.

"We're facing a huge surge in patients, and there are a limited number of beds," he said. "If we want to allocate those beds, we should tie them to those who have this genetic material circulating in their blood."

The article says the Spanish-based study is among the largest of its kind in the world to date, with 250 patients included — 50 outpatients, 100 patients hospitalized in various wards and 100 critically ill patients. Blood samples were collected within 24 hours of patients being admitted, with a series of followup tests.

The paper found 78 per cent of critically ill patients had the genetic material as a biomarker, compared to just a quarter of the general ward patients and two per cent of outpatients.

Kelvin said his study also noted the presence of three molecules associated with repressing the immune system in the critically ill patients studied, a finding that other scientists can pursue.

There seemed to be a link between the trio of molecules – Interleukin-10, Interleukin-1 RA and PDL-1 – and the presence of the virus's genetic material in the blood, he said. The molecules occur naturally in the body and are used clinically to treat autoimmune diseases.

The detection of the molecules in critically sick patients comes on the heels of similar findings by British scientists.

Immunologist Mark Cameron, who worked with Kelvin studying the 2003 SARS outbreak in Toronto, says the findings are helpful on several levels.

In the short term, the linking of the virus's RNA with critical illness helps clinicians in diagnosing severity of the illness, said Cameron, a Canadian based at Case Western Reserve University in Cleveland, Ohio.

"By testing for and identifying biomarkers, you can then find treatments or drugs that can rebalance our immune system,” Cameron said in an interview.

“If we find a biomarker that's up or down and is associated with good or bad outcomes, you have something you can change that can push you towards health rather than worsening illness," he said.

Cameron said often the main treatment for severe COVID-19 is steroids, but his hope is the biomarkers will allow for more precise therapies.

"A steroid is like a sledgehammer . . . . It tamps down the entire immune response and may decrease the things we need in our immune system to fight the virus. So, you want more specific treatments," he said.

His team is studying the early biomarkers present in 50 patients who have just been infected in nursing homes in Cleveland.

Like Kelvin, his early findings also show the presence of the RNA of the virus in patients who are ill, though he didn't quantify the amounts.

Cameron said testing systems used in the study are extremely precise, but the goal will be to create cheaper methods that can produce results in minutes or hours.

Asked if the work will become irrelevant if a vaccine is found, Cameron said the study of biomarkers will remain crucial in years to come to monitor COVID-19 in patients and target their treatment.

"This will be needed five months from now, and five years from now," he said.

This report by The Canadian Press was first published Oct. 30, 2020.