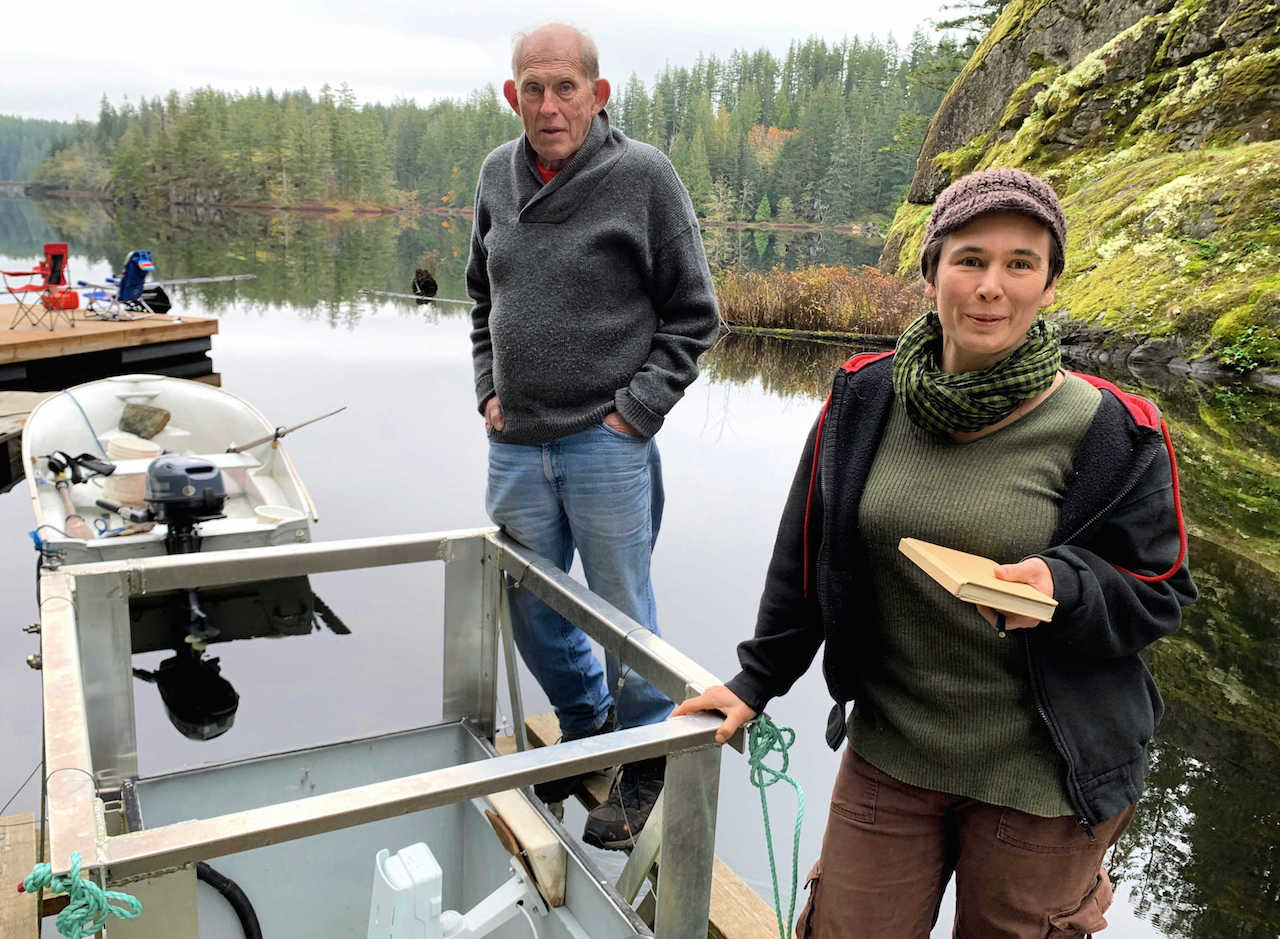 Now, volunteers can monitor returning salmon from the comfort of their kitchen table with the help of a high-tech surveillance system, said Lauren Miller of the Quadra Island Salmon Enhancement Society (QISES).

The Quadra salmon conservation group has rigged up a motion-sensor fish camera system that snaps images of passing coho salmon as they head into the lake to reach their natal creeks further afield.

Volunteers simply have to download the footage and related data from the system, and review it at their leisure, Miller said.

“Some people joke about us being salmon paparazzi,” Miller said.

For two decades, before the camera was installed, volunteers had to make their way to the fish fence at the lake twice daily through October and November, no matter the weather, to open a gate to let the salmon continue upstream and record their numbers.

It was a task that could take hours in some pretty miserable conditions, Miller said.

“We developed the system in a large part out of safety concerns,” she said, adding the fish fence is accessible only by water and volunteers often worked alone.

Volunteer streamkeepers on B.C.'s Quadra Island can monitor returning #salmon from the comfort of their kitchen table with the help of a high-tech surveillance system. #conservation #BC #wildsalmon

Groups of salmon milling in front of the closed gates stressed the fish, especially in warmer weather, and made them easy pickings for otters, she said.

Accessing a gap in the fish fence across the creek, salmon swim through a lighted chute covered in plexiglass along the top and one side, with an angled mirror to provide a side view. The motion-triggered camera above the chute records a short clip if any object passes its view.

“We’ve seen a lot of maple leaves,” joked Miller, adding there aren’t nearly as many false positives as the group was expecting.

The system has recorded thousands of migrating salmon, along with sculpins, crayfish, mink and otters that have enjoyed the shortcut into the lake system since it was set up in 2017.

Not only is the system infinitely more convenient, it’s led to better-quality data.

Viewing and identifying fish with the camera is much easier and provides far more accurate numbers, especially as many salmon swim through during the night, Miller said.

To date, 780 adult salmon, 100 chum and 676 coho have transited the system this spawning season, Miller said Friday, adding the numbers represent the higher end of an average year within the last decade.

Pereboom, involved in salmon stock assessments for DFO, made the trip to Quadra Island Wednesday to get a look at the video counting system.

And video-capture systems like the one at Village Bay provide high levels of accuracy around returning salmon, Pereboom said.

“So, we can put a lot more weight into what those numbers mean compared to stream walks that result in a lower-quality estimate,” Pereboom said.

Such systems aren’t common and take dedication and technical savvy to set up, he added.

“For a volunteer organization, we don’t usually get this type of technical expertise and motivation to capture such professional data.”

The Hupačasath First Nation fisheries staff also operate video-camera systems and capture data on sockeye and chinook salmon for DFO on the Sproat and Stamp rivers tied to the Great Central Lake system.

It took a year, lots of collaboration and close to a thousand volunteer hours to research, design and build the system that now allows salmon free passage through the fish fence day or night, Miller said.

However, despite the fish cam's success, QISES volunteers still hike along the banks of the island’s five most productive salmon streams each autumn, rain or shine, and monitor salmon returns.

There’s no mystery in why folks are willing expend so much effort to capture data and protect such an iconic and important species, Miller said.

“I’m more curious about people who don’t want to count salmon,” she said.

“Salmon are keystone species for the entire Pacific coast. It’s hard to conceive of British Columbia without them.”

Thanks, I really welcome this

Thanks, I really welcome this story; I know how labour-intensive salmon-counting can be, when you have to clear the trap frequently and without fail. It is good to get the word around that technology can help out, maybe even with community volunteers.