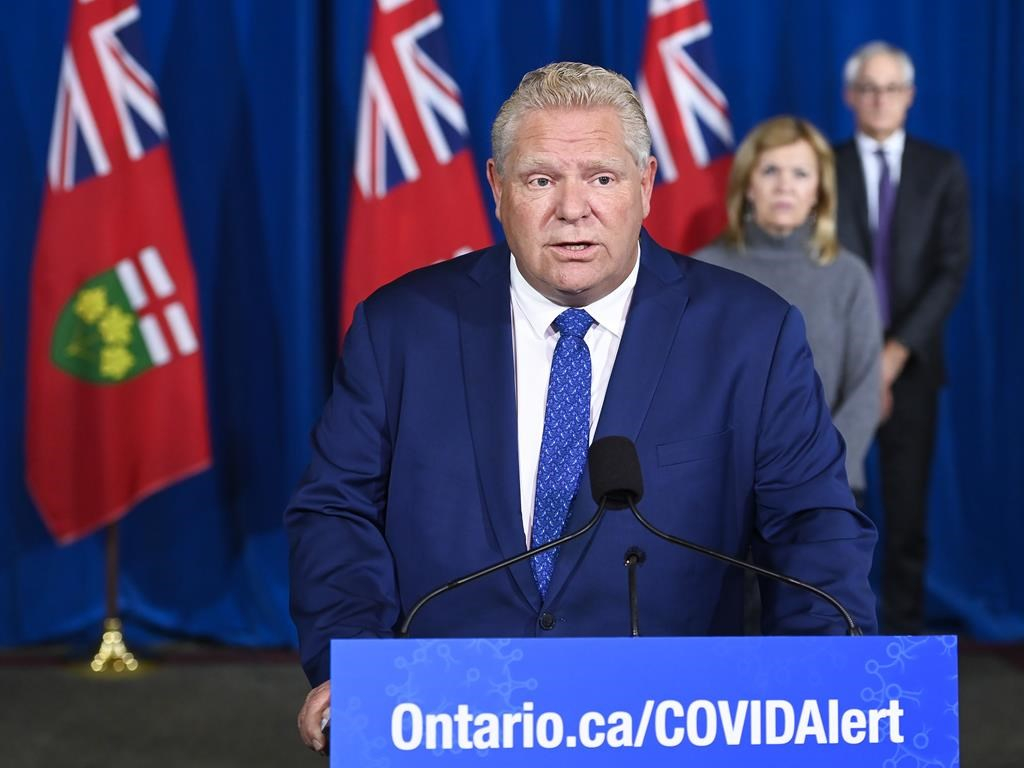 OTTAWA — The country’s top doctor unveiled new recommendations Tuesday for non-medical masks, saying they should be made of at least three layers and stressing their importance as the country heads indoors for winter amid a surging COVID-19 case count.

Face masks should comprise two layers of tightly woven fabric such as cotton or linen, plus a third layer of a "filter−type fabric" such as polypropylene, according to the Public Health Agency of Canada.

“We’re not necessarily saying throw out everything that you have," Dr. Theresa Tam, Canada’s chief public health officer, said at a news conference Tuesday.

"The fit is the most important thing," she said, emphasizing a pinched nose and full coverage of nose and mouth, but also comfort and breathability.

In a departure from news conference habit, the country’s top politicians and doctors wore their masks except when speaking, underscoring the role of face coverage in battling the pandemic as temperatures drop.

"Because it’s winter, because we’re all going inside, we’re learning more about droplets and aerosols. It’s just another layer of protection," Tam said in Ottawa.

The mask memo came as Ontario reported a single-day record of 1,050 new cases of COVID-19 on Tuesday, and 14 new deaths due to the virus.

About 80 per cent of the new cases were in the hot spots of Toronto and the surrounding regions of Peel, Halton, York and Durham.

Despite the unprecedented number of daily cases, Premier Doug Ford said he will ease restrictions on the province’s hot spots, in contrast with Quebec’s recent extension of "red-zone" measures.

Ontario rolled out a new tiered system Tuesday that will determine when and to what extent coronavirus restrictions are placed on parts of the province, a move the government said will help fight the pandemic at a regional level.

Areas with the lowest case counts, positivity rates and community transmission levels will fall into a green category with the most permissive rules. The colour-coded system then moves upward through yellow, orange and red with increasingly strict measures, topped off by a grey "lockdown" level where the most stringent protocols would be implemented

The framework goes into effect on Saturday, allowing restrictions previously treated as hot spots including Toronto, Peel Region and Ottawa to loosen up. The softer rules mean gyms and cinemas can reopen and indoor dining will resume — with capacity limits — following closures under "modified Stage 2" measures imposed Oct. 10.

Meanwhile, Quebec reported 871 new COVID-19 infections and 34 more deaths attributed to the novel coronavirus, including five that occurred in the previous 24 hours.

The province, which last week prolonged red−zone restrictions until Nov. 23 for 12 of its 19 health regions, said the number of people in hospital rose by 27 to 526, and 85 people were in intensive care, a rise of four.

Governments have struggled to balance health priorities with economic woes and pandemic fatigue as the prospect of social isolation and uncertainty around vaccines adds a bleaker tint to the onset of winter.

On Monday, the federal Liberals tabled a bill that would extend the federal wage subsidy and stop a previously planned slide in the value of payments as concerns over small businesses’ survival prospects escalate.

The bill also creates a new commercial rent−relief program to provide aid directly to businesses. The Liberals’ last version relied on landlords to apply for help, which they didn’t do in great numbers.

Conservative Leader Erin O’Toole is calling for the Liberals to put a pause on federal audits of small businesses hit hard by COVID-19.

He says too many small and medium-sized businesses are struggling to survive during the pandemic, and still have been hit by what he calls unfair audit requests from the Canada Revenue Agency.

Many small businesses, such as restaurants and in the tourism sector have been asking unsuccessfully for months for extra help through the federal wage-subsidy program to keep employees on payrolls, O’Toole says.

"And then the audit process. Can you imagine a small business holding on by a thread and having the tax collector descend on you with an audit? I think it’s horrible. It’s unfair," O’Toole said during a morning press conference.

— with files from Shawn Jeffords and Jordan Press

Trudeau says Chinese masks will be checked for quality standards

Not that I entirely disagree

Not that I entirely disagree with O'Toole about this particular thing, but weren't the Conservatives just bitching and moaning about the exact opposite, that money was going out WITHOUT the recipients being checked up on enough? Or is that only a problem if it's poor people?

What happened to the belief

What happened to the belief that the wearing of non medical face masks main value was as a baffle to block the trajectory of virus bearing droplets exhaled by the wearer, and have them land below the level they would be inhaled by anyone near by? Has that 'baby' been thrown out ? Am I seeing a commercial interest at play? It does appear also an attempt is to imbed the idea that it is not US who are spreading the virus by our actions, just that we are innocent bystanders and the virus is spreading itself.

Once again Dr. Tam is late,

Once again Dr. Tam is late, off the mark and half right. The fit of the mask and the ability to handle aerosol droplets are equally important. One without the other makes the effectiveness of the mask quite suspect. Masks are NOT an evolving science. More clarity is needed on the best materials to use (for the mask and the kind of filter).
When will she be talking about the equal importance of good ventilation systems? Perhaps next summer?