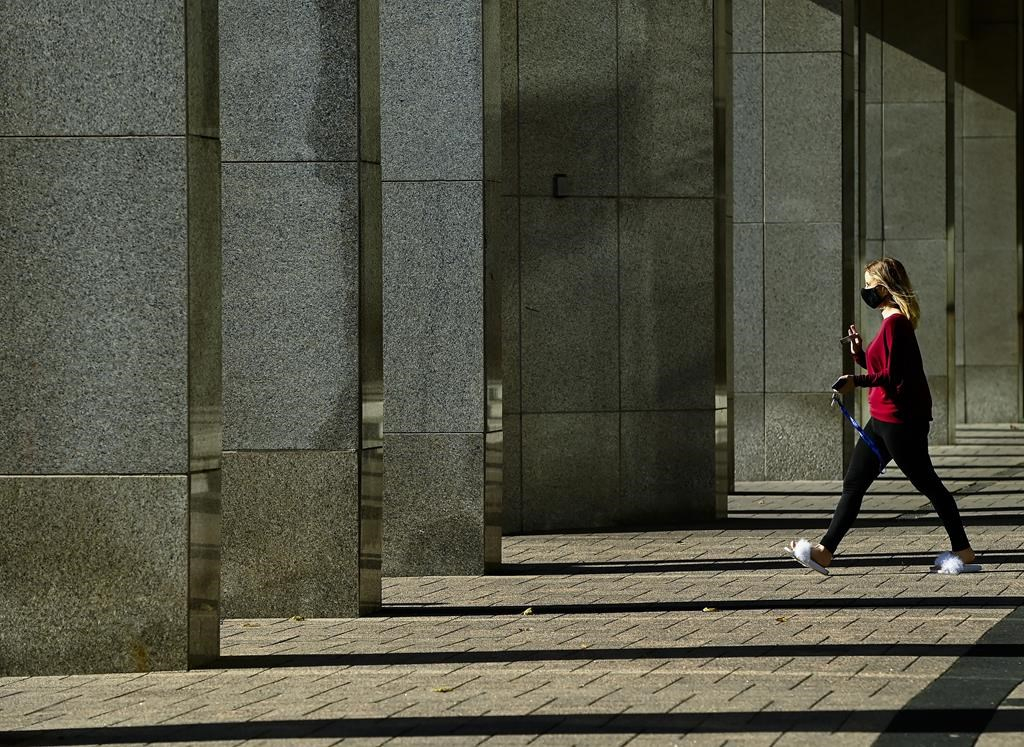 A woman wears a mask as rays of light shine through building columns on a cool sunny fall morning during the COVID-19 pandemic in Toronto on Monday, November 2, 2020. Photo by The Canadian Press/Nathan Denette
Previous story
Next story

Manitoba weighed imposing a curfew to help contain the spread of COVID-19 while Ontario considered whether to loosen restrictions in some hot spots on Monday, as both provinces continued to see hundreds of new infections.

Manitoba Premier Brian Pallister said he is weighing the curfew after reports of large parties being promoted online in Winnipeg, despite tighter restrictions already in place in the city.

“When we were abiding by the fundamentals, we were beating COVID. Some of us lost our way," he said Monday. "Now COVID is beating us."

The news came as a series of new COVID-19 rules took effect across Manitoba, with the capital city under more stringent restrictions.

The Winnipeg region faces a ban on indoor service at bars and restaurants, and a limit of 25 per cent capacity for most retail stores, among other measures. Bars, restaurants and stores in the rest of Manitoba are limited to half capacity.

The new rules -- which include a provincewide cap of five people for public gatherings -- were announced Friday, and the province reported hundreds of new cases over the weekend. Another 241 cases and five new deaths were reported Monday.

Meanwhile, Ontario Premier Doug Ford said he will meet with his cabinet soon to discuss the possibility of lifting a number of restrictions imposed on a handful of hot spot regions.

The restrictions set in place in Toronto, Peel Region and Ottawa on Oct. 10 are set to expire at the end of the week and Ford has said he asked health officials to come up with a plan to allow shuttered businesses to safely reopen.

He said Monday the decision is coming "very soon," but gave no further details.

The restrictions were put in place for 28 days and, among other things, closed gyms and banned indoor dining at restaurants and bars. York Region was later added to the list of hot spots, with the new rules taking effect there on Oct. 19.

Manitoba weighed imposing a curfew to help contain the spread of COVID-19 while Ontario considered whether to loosen restrictions in some hot spots on Monday, November 2, 2020, as both provinces continued to see hundreds of new infections.

The premier has faced criticism from those who believe the restrictions have been unnecessarily burdensome, and those who argue it's too early to roll them back.

"I'm just trying to do a happy balance," he said Monday.

The mayors of 11 cities in the Greater Toronto and Hamilton Area issued a statement Monday in favour of a plan to safely ease the restrictions.

"We support the province's work to establish a safe path forward for restaurants and other establishments from our public health professionals assuming circumstances permit," they said.

Ontario reported 948 new cases of COVID-19 on Monday, and seven new deaths due to the virus.

Most of the new cases remain in the four hot spot regions currently under more stringent COVID-19 rules: Toronto, Peel and York regions, and Ottawa.

In Quebec, the province that has been hardest hit by the pandemic, officials reported 1,037 new cases of COVID-19 and 12 more deaths attributed to the novel coronavirus.