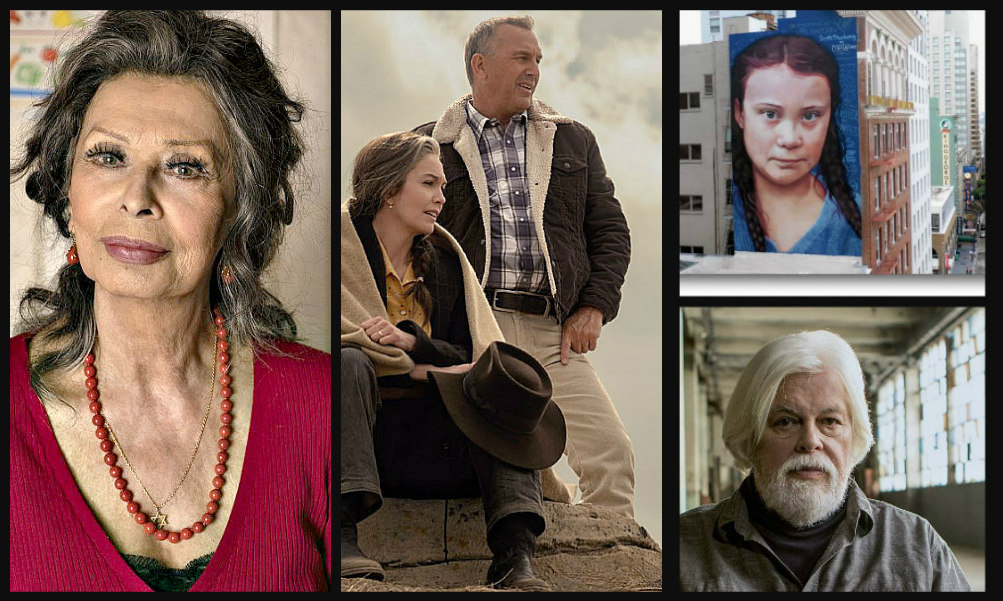 One good thing the COVID-19 drag on the movie houses has done is let small films get some attention. I deal with several like that today, some of them Canadian or made in Canada. But I start with the one big title of the week and the return of an iconic Italian.

LET HIM GO: This week, in particular, you might be in the mood for a nostalgic movie about the American experience as it used to be. This one will do, and it’s in theatres. It’s a western of sorts, set in the 1950s or early ’60s (judging by the cars). You see plenty of big sky country and an actor who feels right at home there. Kevin Costner plays a retired sheriff, with another familiar movie star, Diane Lane, as his wife. (They played Superman’s parents in a couple of movies.) Here they lose a son in a riding accident and a daughter-in-law and grandson to a quick marriage to a sketchy and abusive guy from another state, then set out on a road trip to find them. All of this setup is so rushed, it’s hard to connect to it. But it’s easy to understand the urge of a grandmother to want to see her grandson. And to cringe at what they find.

Chief amid all that is Lesley Manville as the overbearing matriarch of a scary ranchland family. They are feared, though why isn’t clear. Hardly matters. Violent people acting crazy out there on the prairie are common in films like this. You don’t need to explain them. The film spends most of its time finding them, a good stretch building tension and anxiety, and then a quick, fiery and bloody denouement. It’s a common movie outcome, arrived at with a loping pace but a single-minded narrative force. A secondary character adds a brief sub-plot. He says he’s a victim of residential schools designed to drive “the Indian” out of him. The film, set in Montana and one of the Dakotas, but filmed in Alberta, is strong on atmosphere and traditional values, like family and sacrifice, but shaky in the storytelling. (International Village, Marine Gateway and suburban theatres) 3 out of 5

THE LIFE AHEAD: What a welcome return. Sophia Loren hasn’t been in a movie for 10 years. Her son, director Edoardo Ponti, has brought her back and has drawn an exceptional performance out of her. It is understated, though the backstory is bleak. In the film, she’s a Holocaust survivor but doesn’t talk about it. She prefers to show her survival instincts, which had her work as a prostitute for years, and she now helps other sex workers by running a sort of daycare for their children. It’s from a Romain Gary novel that was filmed 23 years ago as Madame Rosa and went on to win an Academy Award.

Among other smaller changes, the story is now moved from Paris to southern Italy. That brings in the ongoing refugee crisis and 12-year-old Momo. He’s from Senegal, a Muslim (though not familiar at all with the faith) and a street kid selling drugs and stealing. When he steals from Rosa, he’s forced to go to her and apologize, and then comes under her care. The film carefully shows the friendship that develops between them as they find what they have in common. He asks about the tattooed numbers on her arm and gradually tells his own story. A rug merchant gives him a job and teaches him bits of Islamic philosophy, including the symbolic importance of the lion. (Some dream sequences of him with a very real-looking lion are remarkable.) There’s a medical crisis ahead and it’ll bring tears, but it’s not melodramatic. It feels natural and adds to the film’s overall purpose. It promotes connection and kindness. That’s timely. (VanCity Theatre now, streaming on Netflix in a week) 4 out of 5

REBELLION: It’s not a feature, it’s the opening for a new season of CBC’s The Nature of Things, the science show hosted by David Suzuki. But it also tells the same story as a documentary called Now, which I reviewed two weeks ago, and the two go together well. They introduce us to today’s climate change activists, starting with Greta Thunberg and then the many she has inspired. This film, only 45 minutes long, takes a wider focus. It talks to people from Sudbury to England, from Washington to India.

It shows huge demonstrations in several cities, including New York and the one Thunberg spoke at next, Montreal. Suzuki met her there briefly and got to identify himself as the father of Severn Cullis-Suzuki, who had a similar but short-lived impact when she spoke at the Earth Summit in Rio in 1992. Cullis-Suzuki says there’s now momentum in the climate change protests. Back then, people “had yet to really feel it.” The film talks to (or shows) many who feel it, including David Attenborough, Marc Carney, Jane Fonda and climate scientist Sunita Narain. Economic inequality and racism are also part of the story. There’s passion and a sense of urgency in this film. That’s typical of Suzuki and the producer, Mark Starowicz, and presumably his co-producer and daughter Caitlin. (Premieres at 9 p.m. on CBC and then CBC GEM) 4 out of 5

WATSON: It has been nine years since I last saw a documentary about Paul Watson. There were already three made by that time. California eco-filmmaker Lesley Chilcott presumably felt we needed another, and it’s worth your time even if you already know a lot about the man many have called an “eco-pirate.” The details of his life are there: growing up with an abusive father but a nature-loving mother, helping to found Greenpeace here in Vancouver, ousted from it for his radicalism and chasing and ramming whaling boats on the open seas with his ship the Sea Shepherd. There’s spectacular film footage, much of it taken by his crew to document the action.

The film adds quite a bit that’s new. He tells his own story right into the camera in what looks like an empty warehouse and it’s naturally a self-serving recounting. Watching the overfishing and other abuses of the oceans, he says: “It occurred to me. We’re insane. If the ocean dies, we all die.” There is a steady stream of nuggets like that. We get the facts on his legal problems and his refusal to apologize for his tactics. He resigned from the Sea Shepherd Society some time ago and now writes books. The film doesn’t say where. (Wikipedia says Vermont.) I didn’t know that he has had four wives, but it fits the image of a man not easy to get along with. (International Village and Cineplex Langley on Saturday and Tuesday, and available digitally at https://theimpactseries.net) 3 out of 5

RECON: Here’s an unusually thoughtful war movie. To some, that’s boring, but I found it involving all the way. It’s set in the Second World War, in Italy, in a perpetually cold and snow-covered world. On a dreary-looking road looking much like a logging road (because it is; it was filmed in B.C.) a sergeant shoots an innocent woman crying over the body of a dead German soldier. That incident is discussed and argued over through the rest of the film. The sergeant lies to his commander (Lochlyn Munro), saying the woman died in a crossfire. One soldier wants to report him. The other can’t be bothered. Four of them are sent on a reconnaissance mission, and the debate continues.

They get a farmer who arrives on a horse cart (Franco Nero) to walk with them and guide them. He thinks there are Germans hiding up a small mountain and offers to show them where. So for the rest of the film, there are two levels of tension: Will the Germans see them, and can the farmer be trusted or is he leading them into a trap? A corporal and two others (Alexander Ludwig, Chris Brochu and Sam Keeley) argue fiercely about morality and tactics. The film, though, is terse in giving us the talk and, at times, brutal. It’s stark, feels real and is from a university professor’s novel based on his own wartime experiences. It was made by an American company in the Okanagan, where it has opened an office and will premiere it at the Vernon Towne Cinema on Tuesday evening, in time for Remembrance Day. Proceeds will go to the Vernon Legion. It’ll also stream on iTunes and elsewhere. 3½ out of 5

THE KID DETECTIVE: This one is dryly funny, but only a bit. It’s a smart riff on retaining your dreams, the ones you held as a child, but society pushed aside. Abe Applebaum (Adam Brody) played detective when he was young, solving cases for the neighbourhood kids with flashes of deductive reasoning. Now he’s an adult with an office and a receptionist, but no clients. He’s a joke, until (as in so many good mystery films from years ago) a woman walks in. Sophie Nélisse, who you might remember from the Quebec film Monsieur Lazhar, plays her. She wants to find out who killed her boyfriend. The police haven’t been able to.

Abe takes on the case and together they go interviewing and sleuthing. Ineptly at times. Unappreciated all the time. After all, everybody notes, he has never solved a murder case, has he? Actually, he still lives with a failure from years ago when the mayor’s daughter disappeared, and he couldn’t find her. The two cases will intersect eventually, but it’s a strain to get them to. Despite the Disney-like title, this is not a comedy. It’s a clever homage to, and a slight send-up of, those detective films we all remember. Brick, from 15 years ago, is more of an equivalent. They’re both entertaining. Evan Morgan made this one in Montreal and you’ll recognize several other Canadian actors, like Wendy Crewson and, from Vancouver, Tzi Ma. (International Village and a few suburban theatres) 3 out of 5

THE CUBAN: This one is lovely and well-meaning, but a little too gentle. The setting is a seniors’ care home (how timely) where an old man is listless with dementia. He’s a former star musician from Cuba and is played very well by Louis Gossett Jr. The staff members have pretty well given up on him, but Mina, a young nursing student played by Ana Golja, finds a way to bring him back. She puts on Cuban music; he lights up, smiles and comes to life.

It’s a definite statement about the recuperative power of music, and probably other arts. It’s the acting, though, that distinguishes this film. Gossett Jr. is vibrant, when he’s back to life. Golja is believable showing sincerity and naïveté, important because we have to accept that can break the rules at the care home. Shohreh Aghdashloo is hard and resentful as her aunt and the home administrator, and an Afghan immigrant. The script skilfully mixes all these strains, but still it could be stronger. It’s Canadian and well-directed by Sergio Navarretta. (streaming VOD at various services, including Rogers, Shaw, Telus and Cineplex) 2½ out of 5