If he wins the presidency, Joe Biden will inherit a complex puzzle 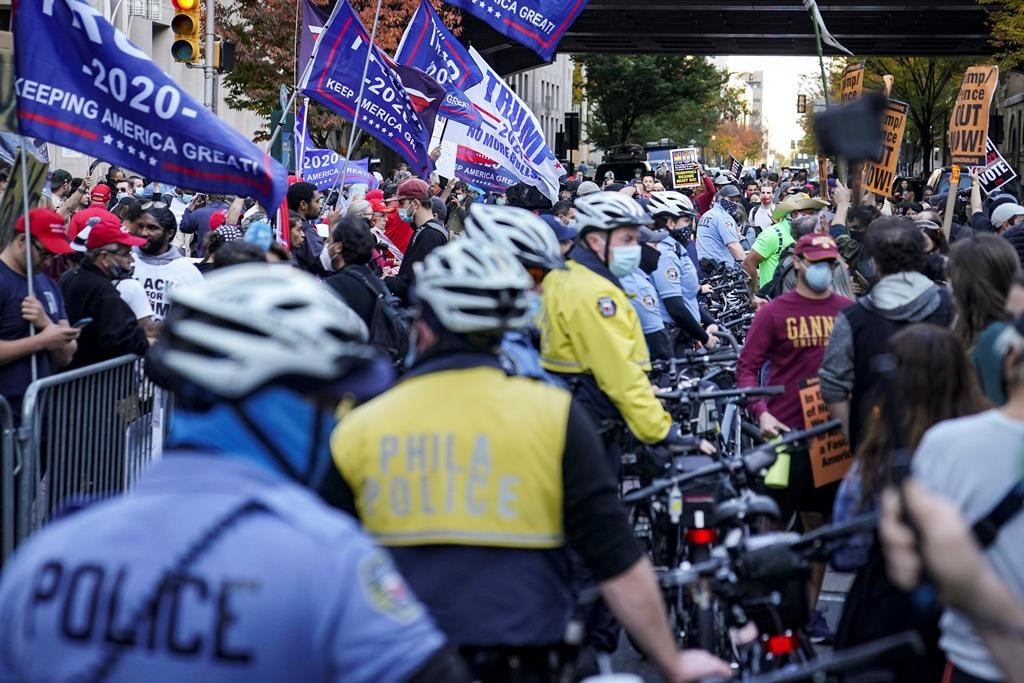 The mission for Joe Biden, should he prove to be elected: bring the United States back together.

Even fictional superspy Ethan Hunt might think twice about that one.

If they prove anything, the long-delayed results of this week's presidential election show the country is as divided as ever.

That was clear enough from the scene in Philadelphia this week, with Donald Trump's devotees protesting the outcome across the street from giddy Biden supporters.

Despite a mishandled pandemic, a crippling economic crisis and a summer of racial unrest, more than 70 million Americans still voted to re-elect the president.

Many — including Trump himself — seem genuinely convinced they did exactly that, and that Democrats are cheating their way to victory.

On Friday, the only thing separating the two factions in Philly was a phalanx of police officers and bicycles, yet they seemed worlds apart.

"America is in a really bad place right now," one protester on the Biden side of the street acknowledged Friday, refusing to give her name.

"It's like the point in a relationship where there's a question about whether there can even be a conversation."

Biden tried to salve that open wound Friday, stopping short of claiming victory but sounding like a man headed for the Oval Office.

The mission for Joe Biden, should he prove to be elected: bring the United States back together.

"We may be opponents, but we're not enemies — we're Americans," he said.

"We're certainly not going to agree on a lot of issues, but at least we can agree to be civil with one another, and put the anger and the demonization behind us."

For days, one side of Philadelphia's downtown Arch Street has been alive with celebration, urging election officials inside the Pennsylvania Convention Center to press on in the effort to "count every vote."

Across the way, a small but determined rogue's gallery of the president's true believers have strained to shout down their rivals, parroting Trump's unfounded claims of electoral fraud.

"They're trying to steal an election," said Dave Dohrmann, a Philadelphia native who was among the Trump supporters pacing back and forth behind the barriers.

That claim is, in a word, untrue.

Trump and his supporters see legitimate mail-in ballots, which reached record numbers in the face of COVID-19, as part of a fictional conspiracy to commit electoral fraud on an impossible scale.

The sheer number of them — more than 65 million across the country — has slowed the process of determining the next U.S. president to a maddening crawl.

The country's electoral will has gradually come into focus in Georgia and Pennsylvania, two critical battleground states that have all but sealed the current president's fate.

In Georgia, a state where only Jimmy Carter and Bill Clinton have disturbed a half-century of Republican dominance, Trump's paper-thin lead disappeared overnight Thursday.

And in Pennsylvania, Biden gradually erased what had been a 600,000-vote election-night lead for Trump, moving ahead and widening the margin with every new batch of counted ballots.

Trump, desperate to stop the counting process in states where he's losing, continued to lash out from inside the White House.

"Joe Biden should not wrongfully claim the office of the president," he fumed on Twitter. "I could make that claim also. Legal proceedings are just now beginning!"

Pennsylvania is worth 20 electoral college votes and Georgia is worth 16. All of them are must-haves for Trump, who is well back of Biden in the race to reach the 270 needed to claim the presidency.

Pennsylvania's votes, added to those of states where he has clear leads, would put Biden over the top.

In Arizona, where the president is lagging behind Biden but has a reasonable chance to catch him and claim 11 electoral votes, the Trump forces are more than happy to let the counting continue.

To cut Trump off or let him rant: That is the quandary facing broadcasters

U.S. election could be decided today