Trudeau hopeful Canada will have COVID-19 vaccine by early 2021 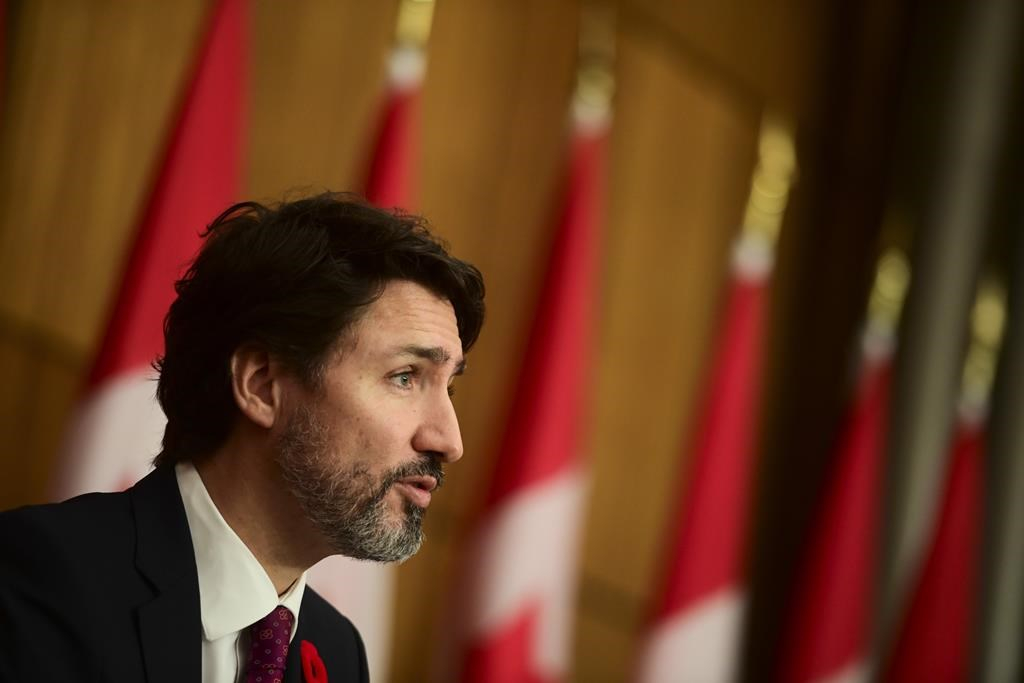 Prime Minister Justin Trudeau said Monday he hopes to see COVID-19 vaccines roll out in Canada early next year, but warned that won’t bring an immediate resolution to the pandemic currently seeing a resurgence in several provinces.

The prime minister said news from Pfizer that one of its vaccine candidates appears very effective in clinical trials is "very encouraging" but won’t help anyone who catches the virus in the meantime.

Speaking in Ottawa, Trudeau said other vaccine candidates have also appeared to progress well, and Canada has secured access to several, given the uncertainty regarding which will be ready first, which will be more effective with certain populations and other variables.

When a vaccine is safe to distribute, the government will begin dispensing it to high-priority groups first, he said.

"We hope to see vaccines landing in the early next year but between now and then it’s really, really important that we double down on our efforts," Trudeau said.

"We need to make sure we are controlling the spread of COVID-19 in the coming months so that when vaccines get here we will be able to act quickly to protect all Canadians."

His comments came after a weekend that saw the two provinces hardest hit by the pandemic report record-breaking daily case counts.

Health officials in Quebec said Monday that while the situation has improved in some parts of the province, such as Quebec City and Montreal, it is worsening in others — including the Saguenay—Lac-St-Jean area, which currently has more than double the provincial rate of cases per 100,000 people.

Public health authorities reported 94 new cases in the region on Monday, for a total of 312 active cases per 100,000 people.

The region was placed under Quebec’s highest COVID-19 alert level on Nov. 2, and the province’s health minister said it will take some time before any effects from the new restrictions are seen.

"We hope to see vaccines landing in the early next year but between now and then it’s really, really important that we double down on our efforts," the prime minister said Monday. #COVID19

In Ontario, Premier Doug Ford was asked Monday whether the ballooning cases in the province pushed him to reconsider its new colour-coded system for pandemic measures, which loosened public health restrictions in all regions but Toronto when it took effect Saturday.

The tiered system places health units in colour-coded categories based on their caseload and transmission levels and has drawn criticism for allowing activities such as indoor dining in restaurants in all alert levels short of a lockdown.

In Peel Region, the only area currently in the red category, local health officials imposed additional measures over the weekend in order to reduce the risk of transmission.

But Ford defended the system Monday, saying it was built to give each region the flexibility to enact further rules, as Peel did. "That’s the reason we have the framework," he said.

Toronto, meanwhile, is remaining under a previous, more stringent system until the end of the week, at the request of local officials. The city accounted for 483 of Ontario’s new cases on Monday.

Mayor John Tory said the city would likely follow in Peel Region’s footsteps and impose "an enhanced suite of measures" to stem the spread of the virus, with more details to come Tuesday.

The city’s top doctor, Dr. Eileen de Villa, said the COVID-19 numbers seen over the last few days were among the "most concerning" she’s seen since the start of the pandemic.

Chief public health officer Dr. Brent Roussin said the province is at a critical point in time, pointing to increased strain on the health system.

Roussin said he has talked with Premier Brian Pallister about imposing further restrictions.

Meanwhile, Trudeau said the federal government is already working on the logistics of distributing a COVID-19 vaccine, particularly since the Pfizer candidate needs to be stored at around −75 C to remain stable.

Canada has bought the rights to 20 million doses of Pfizer’s vaccine, if it proves effective and Health Canada approves it for use here, and Trudeau said the government would purchase more if the initial round goes well.

The company said in a news release that early results from a large-scale trial show its vaccine is 90 per cent effective at combating the virus.