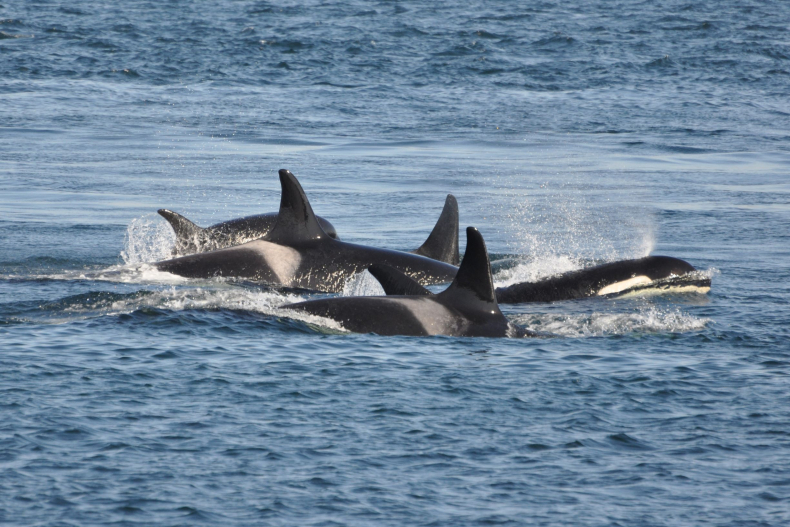 Residents around the Salish Sea in B.C. are very concerned with a proposed U.S. military testing program that could harm critically endangered whales in the region, says Elizabeth May.

The Green party’s parliamentary leader and MP for Saanich—Gulf Islands has raised the issue twice in the House of Commons and written to Prime Minister Justin Trudeau urging him to protest the rules surrounding new U.S. navy tests, including torpedoes, sonar technology and underwater drones.

The navy’s activities, set to be authorized Nov. 12 by the U.S. National Oceanic and Atmospheric Administration (NOAA) through 2027, “would likely adversely affect” the southern resident killer whales (SRKW), a critically endangered species with a population of just 72, according to a summary of NOAA’s own scientific analysis.

The use of sonar and detonations in the water could expose the orcas to things such as temporary hearing loss or the blocking of their feeding, breeding or migration patterns. Other whales, such as the blue, the fin and the humpback, as well as the Guadalupe fur seal, the leatherback sea turtle and dozens of species of fish, could also be significantly harmed.

“Canada must take a strong position on this issue,” May wrote to Trudeau in an Oct. 2 letter. “The program is estimated to cause harm to an additional 1.7 million marine animals.”

Washington state Gov. Jay Inslee has taken a critical position on the issue. In July, the governor wrote the U.S. government asking for “significant revisions” to the rules that would authorize the navy to incidentally harm or harass wildlife. The state considers the rules as they stand to be “unacceptable,” he wrote.

May asked the Trudeau government about the issue in the House of Commons on Nov. 5. “Will Canada stand up to protect our whales?” asked the MP.

Fisheries Minister Bernadette Jordan responded that Canada's Department of Fisheries and Oceans was “engaging” with NOAA on the issue “to ensure common understanding of the proposed activities, and the need to mitigate any potential impacts to whales and whale habitat.”

“We will continue to work closely with our U.S. partners on actions we can each take to protect this species,” Jordan said.

In an interview Nov. 9, May said that the state of Washington’s request for revisions to the rules is something that should be seen as the bare minimum effort by Canada.

She said the federal government is already behind in its protection of the endangered orcas, and Jordan’s statement about engaging NOAA was insufficient.

Elizabeth May has raised the issue twice in the House of Commons and written to Prime Minister Justin Trudeau urging him to protest new U.S. navy tests, including torpedoes and underwater drones that could harm endangered killer whales.

“What DFO has said so far is, ‘We’re working well with our U.S. partners.’ Which means nothing — you’re standing by,” May said.

“I think we should support the state of Washington and state clearly that we hope this will be put on pause, to consider significant improvements to the mitigation and avoidance measures.”

Canada’s National Observer reached out to Jordan’s office Nov. 9 for comment but did not receive a response before publication.

In his letter, Inslee said the U.S. state had made “significant investments to restore the ecosystem of the Puget Sound and our coastal waterways,” and while he appreciated the navy’s work to avoid wildlife before, his concerns over sonar exposure and vessel strikes had not been addressed.

NOAA is set to issue seven-year regulations under the U.S. Marine Mammal Protection Act that would authorize the U.S. navy to incidentally harass “28 species of marine mammals” from “sonar and other transducers and in-water detonations,” according to an emailed summary written by the National Marine Fisheries Service and obtained by Canada's National Observer.

The rule would also authorize the “potential serious injury or mortality of up to three large whales from vessel strikes over the seven-year authorization period.”

The agency says it has worked with the navy to develop a “comprehensive suite of mitigation measures” that would reduce the likelihood of harm for most species. This includes shifting the times or areas used where mammals carry out important behaviour, or where certain species gather.

Meanwhile, the navy has said that the authorization reflects a “worst-case scenario” and is not indicative of the typical testing activity.

Navy spokespeople have told media that their vessel traffic makes up less than one per cent of all traffic in Pacific Northwest waters, and the military is careful not to intrude on wildlife.

Politicians, show us your blueprint to protect our coast

They're "careful not to

They're "careful not to intrude on" wildlife? By wildlife standards, or by the US Navy's? Weren't they told to vamoose off the E coast of the US several-many years ago, just bc of the negative impact upon marine wildlife?

This is unacceptable. How do

This is unacceptable. How do we stop it?