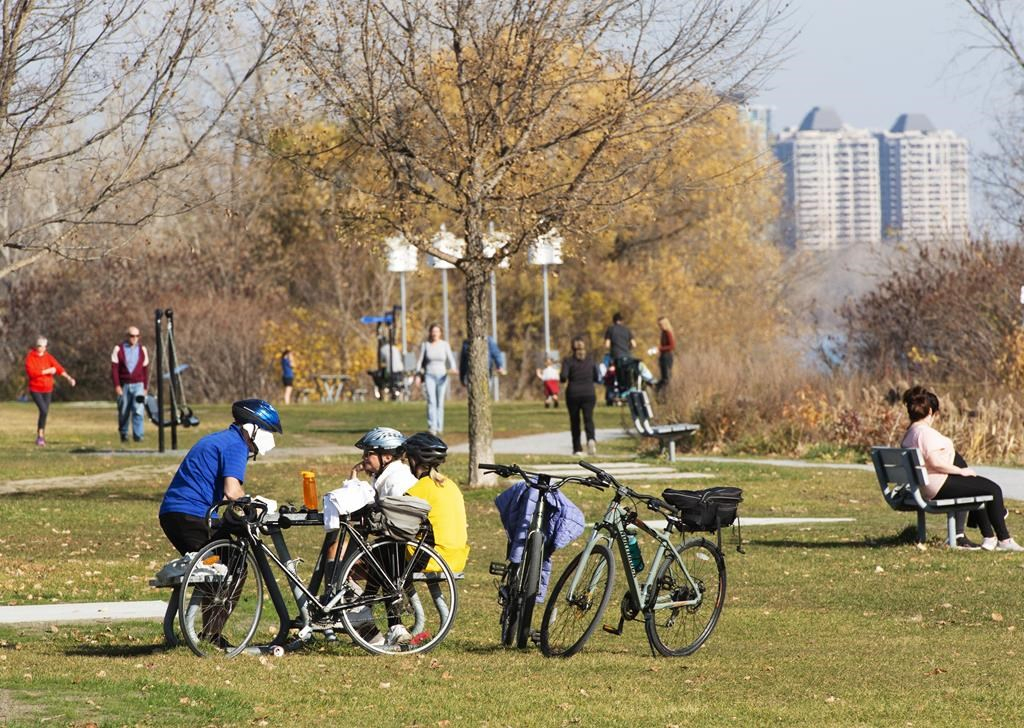 People enjoy the warm weather along the lakeshore, on Monday, Nov. 9, 2020 in Montreal. File photo by The Canadian Press/Ryan Remiorz
Previous story
Next story

COVID-19 continued its record-setting rise across parts of Canada on Wednesday as Ontario reached another new high for daily infections and Manitoba recorded its deadliest day since the pandemic began.

Health officials reported nine more deaths and 431 new infections in Manitoba -- a province that counted only a handful of active cases throughout much of the summer.

The deaths were concentrated in the Winnipeg area, and more than half were linked to outbreaks in hospitals and care homes.

Both Quebec and Ontario reported about 1,400 new cases, including a new record of 1,426 in Ontario.

Canada has diagnosed an average of more than 4,000 COVID-19 cases and 50 deaths a day over the past week, according to Canada's chief public health officer, Dr. Theresa Tam.

In a statement, Tam said the country's test positivity rate had recently hit 5.8 per cent, and she urged Canadians to continue to follow safety measures such as handwashing, physical distancing and staying away from crowded, poorly-ventilated spaces.

"Though the cumulative number is high and continues to increase, with several regions experiencing accelerated growth, it is important to remember that the vast majority of Canadians remain susceptible to COVID-19," she said.

"This is why it is important for everyone to continue with individual precautions that will keep ourselves, our families and our communities safer."

Ontario's numbers included at least three cases in London, Ont., and five at the University of Windsor that health authorities are linking to large Halloween parties.

COVID-19 continued its record-setting rise across parts of Canada on Wednesday, November 11, 2020, as Ontario reached another new high for daily infections and Manitoba recorded its deadliest day since the pandemic began. #Covid19 #Canada

Quebec, meanwhile, reported a 39-person spike in hospitalizations, due to what Health Minister Christian Dube said was a rise in infections in several regions of the province. The province reported 1,378 new cases and another 22 deaths on Wednesday.

Even as deaths continued to be added to Quebec's total, the province's public health institute published a study indicating that the novel coronavirus was less lethal over the summer than in the spring.

The study, which measured the proportion of deaths among people with COVID-19, showed that lethality peaked at 14 per cent between April 5 and May 2. It then gradually decreased and stabilized at around one per cent between July and September.

Most provinces opted not to hold COVID-19 briefings as scaled down Remembrance Day ceremonies were held across the country. The Royal Canadian Legion explicitly asked Canadians not to attend the ceremonies in person this year out of concern over spread of the virus.

This report by The Canadian Press was first published Nov 11, 2020