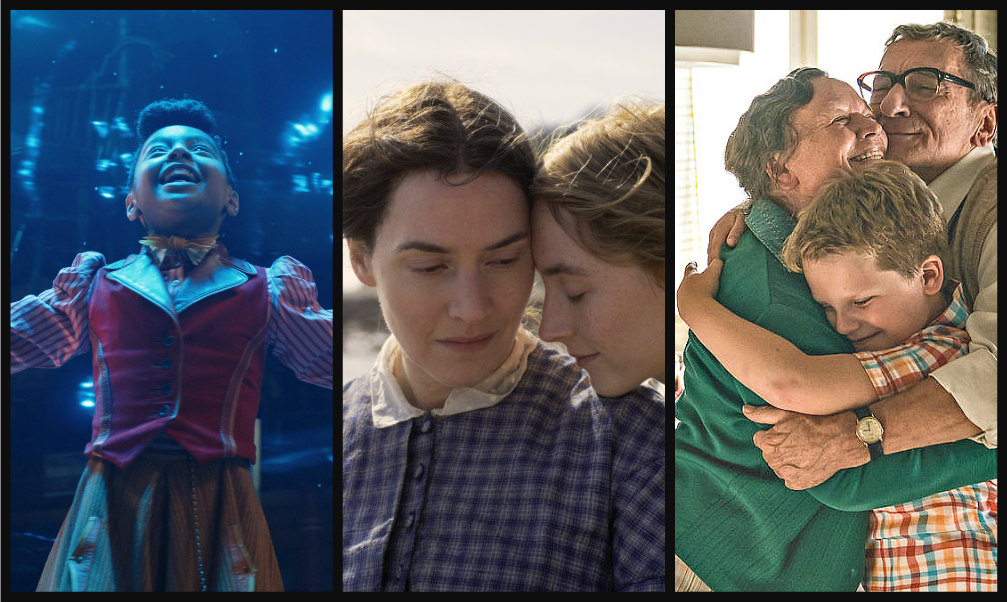 There are so many new films this week, I couldn’t cover them all. One, a comedy-horror film, I had no chance to preview, two others I’ve postponed to next week and one, The New Corporation, I’ve written about before. It’s a second look at the misdeeds of modern companies and I highly recommended it when it was in Vancouver for the film festival; it’s now streaming at VIFF Connect.

But there are these:

JINGLE JANGLE: A CHRISTMAS JOURNEY: The Yuletide movies are coming. The Hallmark and Lifetime channels between them have 70 this year, but it’s going to be hard to find one better than this Netflix offering. It’s being promoted as an instant classic, and I agree. The story is new, the settings are beautiful and there’s a nice mix of sentiment and robust musical energy. David E. Talbert, the writer-director, originally wrote it as a stage show and transferred the action to the screen with spectacular results.

The story, as read by a grandmother (Phylicia Rashad), is about a great inventor of children’s toys (Forest Whitaker) who has fallen on hard times. His assistant ran off with his book of future designs and won toymaker of the year over and over again with them. Now, years later and played by Keegan-Michael Key, he needs more, knows there’s one special unfinished toy back at the shop and comes to get it.

The inventor’s granddaughter (Madalen Mills) arrives first, though, and with a sunny philosophy of “you have to believe” and the help of a young boy named Edison tries to complete the invention. Naturally, they manage to break it first. Their efforts, the impending confrontation and the temper of the times (Victorian England) are propelled with songs, one written by John Legend, who is also one of the producers. There are quiet ballads and huge production numbers with people dancing in the streets. Whitaker and Key both show they can sing, but the star is newcomer Mills, charming and outgoing. Ricky Martin voices a pompous self-important toy (“I am one of a kind”) and there’s a terrific snowball fight. The family will love it all. (Netflix) 4½ out of 5

AMMONITE: This is the third film I’ve seen in the past year or so where a real person from the past is reinterpreted as a lesbian. Mary Anning, the English paleontologist from the 1840s, wasn’t known as one, but as the director Francis Lee argues, she wasn’t known as heterosexual, either. So, she’s fair game, I guess, and brought to life with star power. Kate Winslet plays her as a resentful fossil hunter working on her own while the scientific establishment disregards her. Women don’t do science, the film describes as their attitude. In comes a man who does admire her work, but has a devious purpose: To park his wife (Saoirse Ronan) for a few weeks to get over her melancholia. “It is a woman’s position to care for a fellow sister, is it not?” he says. The film is quite obvious in stating its feminist themes.

The two women have a testy relationship at first and the early parts of the film are the most interesting as they work around their differences. Winslet is playing withdrawn, but conveys strong emotions, and Ronan comes alive believably. Then as the film seriously slows down, the sad one suddenly kisses the grumpy one and that leads to two extremely realistic sex scenes. She’s able to “unlock something” in the lonely woman. Can it last? Jealousy swells up at a tony musical evening and resentment returns on a visit to the British Museum. The narrative is strong; the chemistry between them not so much. (International Village and several suburban theatres) 3 out of 5

ALL ABOUT ME: The Cinematheque’s annual European Union Film Festival is back and opens with a real charmer from Germany. All About Me tells of the early life of a popular comedian named Hape Kerkeling and proves to be a statement about family and the strength it engenders as well as a potent life credo: “When you know what you want, just do it.” Oscar winner Caroline Link spins these ideas into a moving story of a boy suffering a harsh home life (mom dies by suicide, dad leaves, two grandmothers raise him) who finds a way out of his despair with laughter. He’s a natural performer, even as a young child, and he delights in his ability to make people laugh.

Families with a child who performs in the living room will enjoy it completely. Young Julius Weckauf is perfect as the nine-year-old kid version with a slight show-off tendency and a lot of reason to find liberation in his show-playing. The relatives are supportive and the family ambience is touching. Quite a special film. Trivia: Kerkeling, who became a major TV personality, was also the voice of Olaf in the German dub of Frozen. (Streaming, includes an interview with the director) 4 out of 5

The whole festival is streaming this year and therefore widely accessible. Check for content at euffonline.ca and find local Vancouver details here.

HILLBILLY ELEGY: Critics are giving Ron Howard’s new film an extremely rough time. It has problems but doesn’t deserve this. Howard is a mainstream filmmaker, accept it and remember that he can entertain. And then think of two wonderful performances in this one, Amy Adams as a drug-addled rural mom from Kentucky, and her equally difficult mom, played by Glenn Close. She’s sure to be a top contender at the Academy Awards next year for this brave performance, the makeup and clothing that make her look ugly and shabby and the fact that she has been nominated seven times before. Her acting is compelling in this one.

The film is taken from a bestselling memoir by J.D. Vance, played here by Gabriel Basso. Unfortunately, it cuts back on a major part of the book — the analysis of hillbilly country folks, their lives, insular society and lack of opportunity — and mostly focuses on his personal story. He’s in Ohio, hopes to go to Yale University and is called back to Kentucky where he grew up. Through flashbacks and meet-ups, he recalls his life there, his mother’s struggles with addiction and his grandmother’s equally erratic ways. The focus is on the family, and by downplaying the society they live in and that shaped them, the film loses what makes the story exceptional. It becomes one man’s quest to rise in status. Without the context, it feels trite, although very well-made and sure to please many. I particularly liked the fish-out-of-water sequences at an academic dinner, although, to some, they’re just typical of the clichés they see in this film. (Now at VanCity, 5th Avenue and suburban theatres, starts on Netflix Nov. 24) 3 out of 5

THE CLIMB: Here’s an unusual and entertaining comedy about friendship, written by two pals and then played by them. Michael Angelo Covino, who also directed, and Kyle Marvin play Mike and Kyle, who we follow through several years of their life starting with an eventful cycling tour in France. That’s where Mike admits he has been sleeping with Kyle’s fiancée. How they overcome that revelation, and what seems like a retaliation later when they get back to California, makes this a droll and funny study of the connections people need.

They don’t even go together well. Kyle is easygoing; Mike is driven. Mike tries to sabotage Kyle’s wedding years later, not out of mean feelings, but out of a desire to help him. Their relationship may be toxic, but they need each other, or maybe they’re just going along because they always have. The film watches; doesn’t pronounce. Everybody in it talks slow and kind of with a drawl, but they’re not hicks. The pace is languid and the take on friendship is true, if a bit odd. (International Village) 3½ out of 5

SAINT FRANCES: Millennials will likely enjoy this. The situation is absolutely contemporary, the difficulties that arise are plausible, and the overall tone is accepting, not at all judgmental. Actually people who judge, like a woman complaining about breastfeeding in public, are dealt with swiftly and with humour. The main concerns are bigger. Bridget (written and played by Kelly O’Sullivan) is a directionless 34-year-old. She works as a server, hooks up for a one-nighter and finds herself pregnant. Solution? An abortion, with not a lot of regret afterwards but some straining to comfort her doubts.

She takes a job as a nanny for a precocious little girl with two mothers. One is Black, the other is white, and they’re Christians with a crucifix prominent on a wall. The film mixes so many attitudes that there can only be two things at play: A contrived script or a realistic view of conflicting ideas existing side by side. The latter is the case here and exemplified by a comic line after one incident: “I don’t know why I’m angry. I’m an agnostic feminist.” The tone is light (mostly), the concerns are big, and the connection with the little girl is sweet. She’s written as a sort of spirit guide from whose innocence Bridget can learn. The script makes her too knowledgeable at times, as when she pretends to hear Bridget’s confession in a church, but the interplay works. (Streaming at https://viff.org) 3½ out of 5

Among the guests is her mother, played by Jane Seymour, as apparently a former Swedish film star with ribald stories and needs. There are ex-lovers, people who take mushrooms before dinner and a shaman, and the snappy dialogue bristles with lines like “You people used to be fun” and “You haven’t been thinking for years.” Nicol Paone, who wrote and directed it, is in a sketch comedy group and the film has a lot of that kind of ambience. Speedy incidents, chaotic spats but little import. (Streaming digitally and VOD) 2½ out of 5