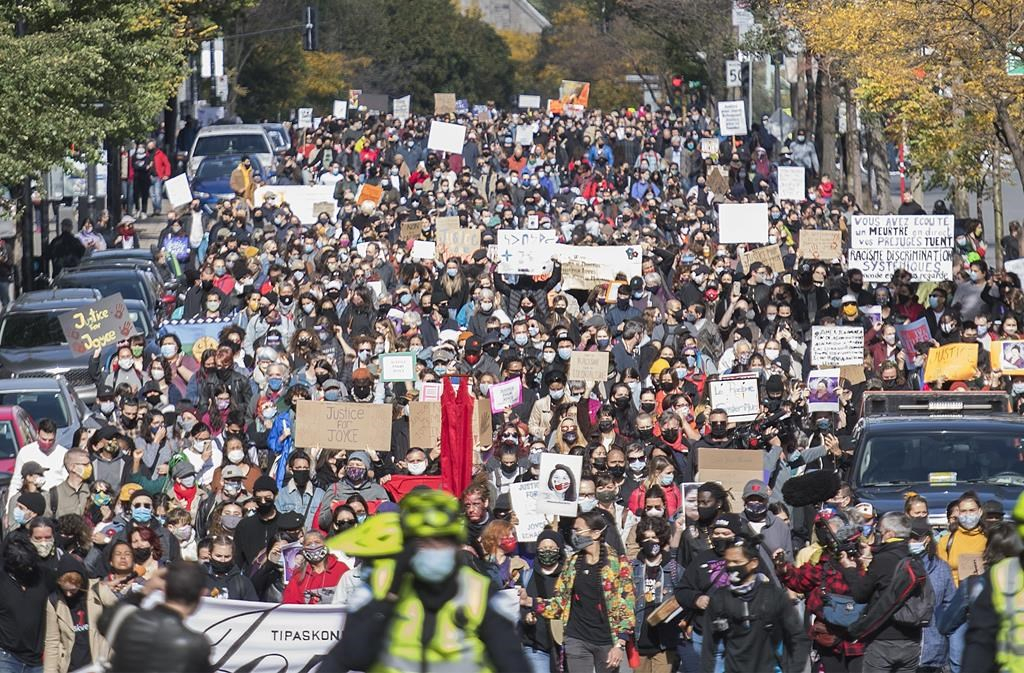 People take part in a protest called Justice for Joyce in Montreal, Saturday, Oct. 3, 2020, where they demanded justice for Joyce Echaquan and an end to all systemic racism. THE CANADIAN PRESS/Graham Hughes
Previous story

Flamand, vice-chief of Manawan, an Atikamekw community about 250 kilometres north of Montreal, helped craft a list of recommendations submitted Monday to the Quebec and Canadian governments on how to tackle systemic racism in health and social services.

The call to action, known as Joyce’s Principle, aims to ensure that Indigenous people have equal access to "the highest standard" of government-run health services. First Nations have for years complained about discrimination in hospitals and other institutions.

"We’re reaching out to all the authorities, institutions and organizations to change their mentality toward Indigenous people," Flamand said in an interview Sunday. "I think that will benefit everyone."

Joyce’s Principle is named after Joyce Echaquan, a 37-year-old Atikamekw woman who died in hospital in September in Joliette, Que., after she filmed staff making derogatory comments against her. The video was shared around the world.

The many recommendations in Joyce’s Principle include that the federal government revise its financing model for health and social services in collaboration with Indigenous groups. It also recommends the Quebec government set up an ombudsperson’s office for Indigenous health and finance awareness campaigns to educate the public about Indigenous issues.

The Atikamekw of Manawan Council and the Council of the Atikamekw Nation are calling on schools, professional orders and health and social services agencies to offer training programs in line with Joyce’s Principle.

Echaquan’s death and the mistreatment she received in hospital shook Quebec, where an inquiry last year concluded systemic discrimination existed in public services, including health care. Quebec has been under pressure to recognize the existence of systemic racism against Indigenous people in the province.

In a written message in the opening pages of Joyce’s Principle, Echaquan’s husband, Carol Dube, urged Ottawa and Quebec City to adopt the recommendations. "Joyce’s death was a terrible tragedy for my children and me," Dube wrote.

"I hope the governments of Quebec and Canada will adopt Joyce’s Principle so that this terrible event did not happen in vain, that her voice signals the start of real changes for all Indigenous people so that no one ever again falls victim to systemic racism."

On Nov. 6, Quebec announced $15 million to pay for liaison officers and other workers to accompany Indigenous people through the health-care system. Quebec’s Indigenous affairs minister, Ian Lafreniere, said in a statement at the time that the government was "committed to change things and begin a new chapter in our relationship with First Nations and Inuit."

The call to action, known as Joyce’s Principle, aims to ensure that Indigenous people have equal access to "the highest standard" of government-run health services.

The Assembly of First Nations Quebec-Labrador welcomed the government’s investment, but also urged it to adopt Joyce’s Principle.

Nakuset, executive director of the Native Women’s Shelter of Montreal, welcomed Joyce’s Principle on Monday and said she hoped governments would provide the resources to implement it. "Right now if I have to send someone to the hospital ... they don’t feel safe going," she said in an interview.

Asked about Joyce’s Principle during a news conference on Monday, Quebec Premier Francois Legault said a government committee that includes Lafreniere would table recommendations for how to tackle racism in the province in the coming weeks.

The federal government did not immediately respond to a request for comment.

Flamand said he hopes both governments will adopt Joyce’s Principle to ensure Indigenous rights are respected and to prevent similar tragedies such as Echaquan’s death from happening again.

“We often talk about reconciliation and Joyce’s Principle is also a way to (address that)," he said, "but never forgetting Joyce’s story and that of her family, still waiting for justice."