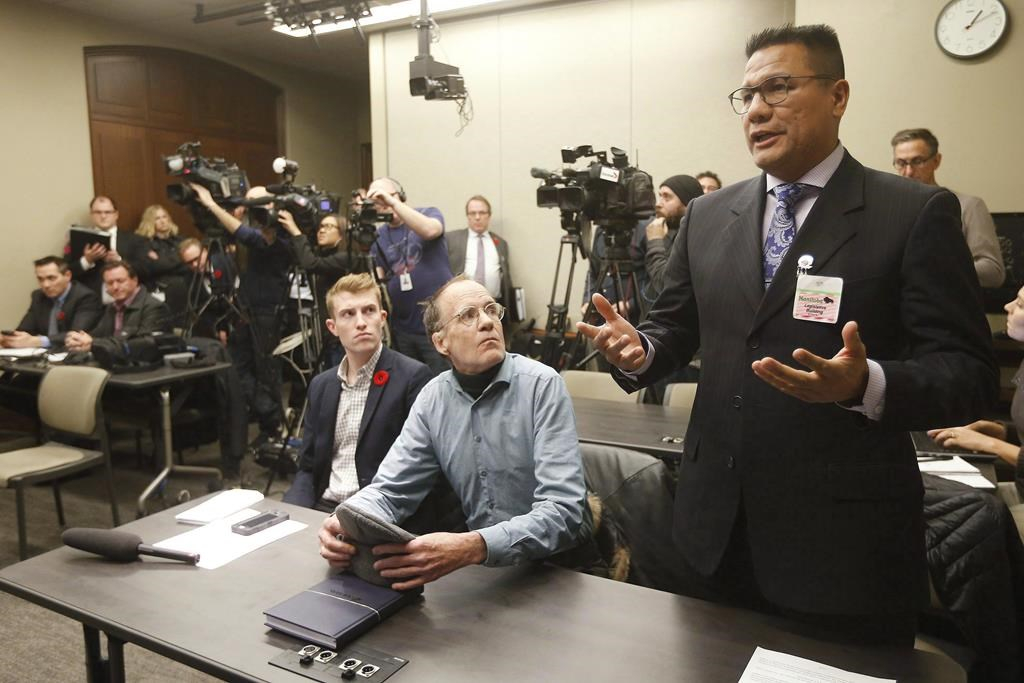 Onekanew (Chief) Christian Sinclair of the Opaskwayak Cree Nation asks Manitoba Premier Brian Pallister a question during a news conference at the Manitoba legislature in Winnipeg on Nov. 7, 2017. File photo by The Canadian Press/John Woods
Previous story
Next story

Every resident of a long-term care home on a northern Manitoba reserve where the number of infections almost doubled in a day has tested positive for COVID-19, says the Indigenous community's leader.

All 28 seniors at the Rod McGillivary Memorial Care Home on the Opaskwayak Cree Nation have been infected and 17 of them are symptomatic, Onekanew (Chief) Christian Sinclair said Monday.

At least 17 staff members have also tested positive, and others are isolating and monitoring for symptoms, he said.

The dramatic increase in cases has forced the reserve, about 520 kilometres northwest of Winnipeg, to be put under lockdown. There were 63 active cases on Sunday but that had jumped to 124 by Monday.

“Our No. 1 goal is to stabilize and flatten that curve,” said Sinclair, who added the First Nation is investigating how the virus was able to spread within the care home so quickly.

Opaskwayak leaders have had daily talks with the federal government and Sinclair said he is considering whether to ask for help from the military. There’s significant pressure on the community’s front-line workers as health-care staff are pushed to the limit or are forced to isolate.

Opaskwayak Cree Nation provides health services to neighbouring First Nations also experiencing outbreaks. Sinclair said he’s in talks with Indigenous leadership and the nearby town of The Pas to deal with pressures being put on the northern health-care system.

Northern Manitoba and its First Nations communities avoided the brunt of the first wave of COVID-19 in the spring. Months went by without new infections in the region.

But as the second wave began to creep into Manitoba over recent months, it’s becoming clear the First Nations population has not been spared.

The entire province moved to red on its pandemic response scale last week after deadly outbreaks in care homes and a significant increase in infections. There were a record-breaking 494 new cases Sunday.

Every resident in a northern Manitoba has tested positive for COVID-19. #Manitoba #Covid19

The Manitoba First Nations COVID-19 Pandemic Response team has been sounding the alarm that Indigenous people are facing more severe health outcomes if they are infected and have a higher rate of hospitalization.

The team's numbers showed 18 First Nations people had died since the beginning of the pandemic, seven in the last week alone. Anderson said the median age of First Nations patients who die of COVID-19 is almost a full decade younger than that of non-Indigenous Manitobans.

“Our need to act aggressively and act urgently is even beyond that for the rest of the population.”

Sinclair said Opaskwayak and neighbouring communities are working hard on contingency plans. But if infections continue at the current rate, significant help will be needed quickly.

The community is already converting a veteran’s hall into an isolation unit for 40 people. And it's looking at doing the same in two schools.

“We have to be prepared as possible,” Sinclair said.