By Christopher Reynolds | News, Politics | November 18th 2020
#967 of 1465 articles from the Special Report: Coronavirus in Canada 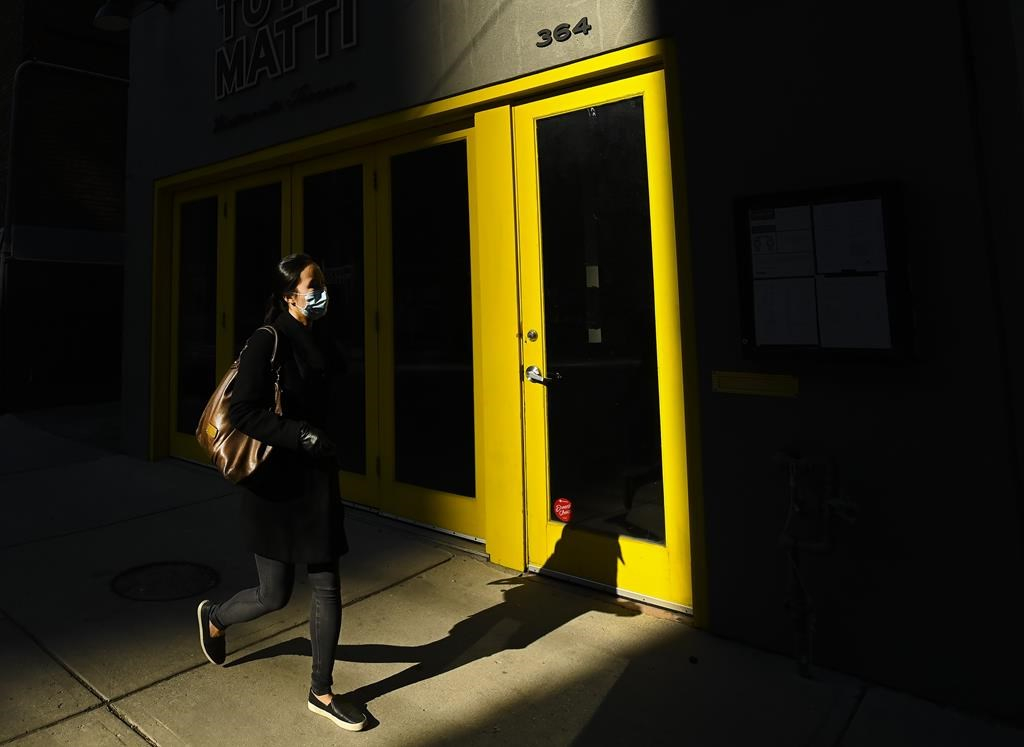 A woman wearing a protective mask walks through a shaft of light during the COVID-19 pandemic in downtown Toronto on Thursday, November 12, 2020. File photo by The Canadian Press/Nathan Denette
Previous story
Next story

Prime Minister Justin Trudeau said the military could play an integral part in rolling out COVID-19 vaccines across the country, though question marks remain around cost and distribution.

As case counts continue to climb at an alarming pace, the Canadian Armed Forces are already helping the Public Health Agency of Canada hammer out a support plan for vaccine rollout and set up a national operation centre to oversee broader delivery.

“Obviously, getting those vaccines from an airport tarmac or a port to Canadians right across the country is a significant logistical challenge," Trudeau said Tuesday in Ottawa.

“That will involve multiple government agencies, possibly private contracts as well. It may well involve the Canadian Armed Forces.”

The remarks line up with those from Maj.-Gen. Trevor Cadieu, who heads the military's strategic joint staff. He told the House of Commons national defence committee Monday the Forces "expect a potential request" for assistance with vaccine distribution.

Uncertainty remains around other logistical details.

"It's a bit of a moving target," Dr. Howard Njoo, deputy chief public health officer, said Tuesday of the number of doses bound for Canadian shores.

Shipments will arrive in batches, he said with the first landing "hopefully sometime early in the new year. That could lead to a majority of Canadians being vaccinated by the end of 2021, Njoo added, with the qualifier that "there will be adjustments."

Storage and administration costs are other unknowns.

"And that’s not available unless you go through a big industrial freezer," he said.

Prime Minister Justin Trudeau said the military could play an integral part in rolling out COVID-19 vaccines across the country, though question marks remain around cost and distribution. #COVID19 #Vaccine #cdnpoli

Anticipation around vaccines continues to grow as case counts tick upward and hospitalizations increase west of the Maritimes.

Total cases hit 306,467 across the country, according to numbers reported as of Tuesday afternoon, more than half of those cases having come in the past four months. The death toll now stands at 11,086, according to figures from provincial health authorities.

"We still have to get through the next month and the month after that before vaccines arrive," he said.

The number of patients with severe illness due to COVID-19 is surging, while those over 80 years old have the highest incidence rate, Tam said.

Public health authorities are warning of a steep rise in demand for hospital beds and intensive-care treatment in the days ahead based on recent record-breaking case numbers.

Asked about possible military-run field hospitals down the line, Tam said that "we do have those kinds of capacities, but it’s not limitless, and we should not get there."

New cases exceeded 1,000 for the 12th consecutive day in Ontario, which reported 1,249 new cases Tuesday and 12 new deaths due to the illness.

Nunavut is the latest jurisdiction to announce strict new measures, as the territory prepares to enter a partial lockdown.

It logged 34 new cases Tuesday, more than doubling its tally overnight and less than two weeks after the first case was reported Nov. 6. The spike has prompted the government to close all schools, indoor dining and non-essential businesses for at least two weeks starting Wednesday.

Manitoba, which brought in similar measures last week, is upping its enforcement game, hiring a private security firm to help hand out fines for infractions such as gathering in groups of more than five people.

"We can’t accept this. We’re in code red in Winnipeg right now. We have people dying every day. We have health-care workers telling us that our hospitals are reaching their limits," Roussin said, stressing alternatives such as curbside pickup or online purchase and delivery.

In Saskatchewan, the government is requiring residents to wear masks in all indoor public spaces, effective Thursday. The province announced Tuesday it is also suspending all visits to long-term care homes unless there are compassionate grounds and limiting private indoor gatherings to no more than five people.

Quebec reported 982 new cases of COVID-19 Tuesday and 24 more deaths attributed to the virus, prompting Premier François Legault to forecast that "red zone" restrictions will likely remain in most regions past the initial end date of Nov. 23. Health authorities said hospitalizations jumped by 47 compared with the prior day, to 638.

“Maybe next summer we could go back to a life that is just about normal,” Legault said in French.