Ontario auditor to release value-for-money audits on the environment 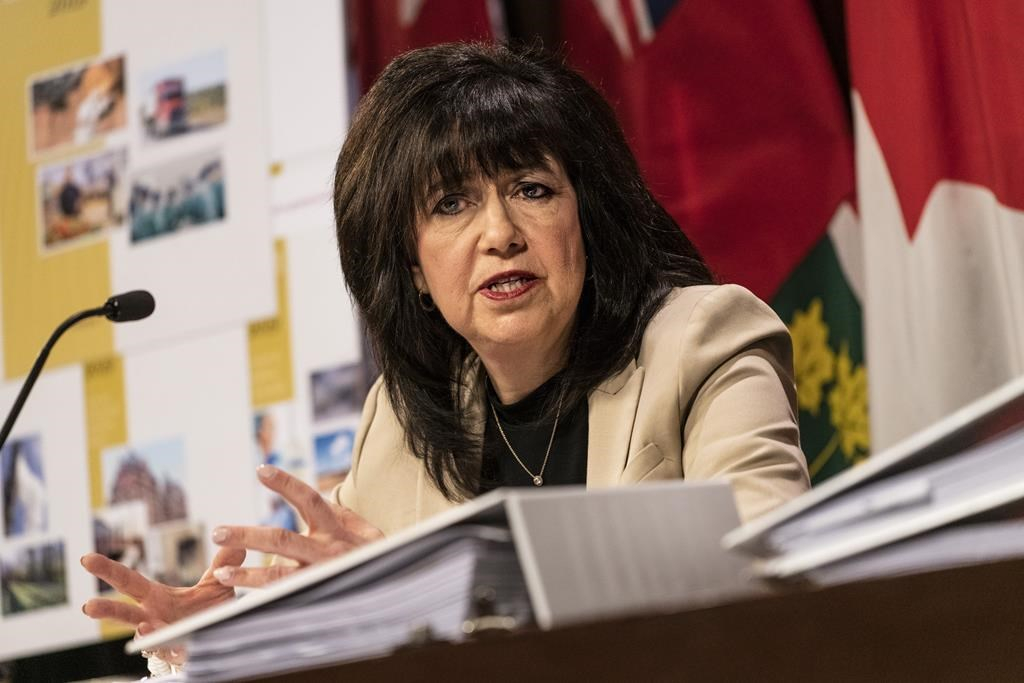 Ontario Auditor General Bonnie Lysyk speaks during a press conference at Queens Park after the release of her 2019 annual report in Toronto on Wednesday, December 4, 2019. File photo by The Canadian Press/Aaron Vincent Elkaim
Previous story
Next story

Ontario may not meet its greenhouse gas emission targets because they're not a "cross-government priority," the province's auditor general said Wednesday, casting doubt on a key environmental pledge made by Premier Doug Ford.

Auditor General Bonnie Lysyk's findings come in a series of environmental value-for-money audits released along with her annual review of the province's Environmental Bill of Rights.

Lysyk found the Progressive Conservative government is not focused enough on reducing fossil fuel use or energy emissions from buildings, which could hinder efforts to fulfill the promise it made to fight climate change after taking office in 2018.

"Our audit found the province risks its 2030 emission-reduction target, in part because climate change and the reduction of greenhouse gas emissions is not yet a cross-government priority," she said in a statement.

In 2018, then environment minister Rod Phillips pledged that Ontario would meet Canada's obligations under the Paris Agreement and introduced a plan to achieve that goal.

Under the Paris Agreement – which commits to keeping the increase in global average temperature to below 2 degrees Celcius – targets were set to reduce emissions by 30 per cent below 2005 levels by 2030.

For Ontario, that means a reduction in emissions from 161 megatonnes to 143 megatonnes by 2030.

But Lysyk said two government ministries and a key agency on the file neither assess or enforce energy efficiency compliance for buildings despite it being a major contributor to Ontario's greenhouse gas emissions.

She notes that use of natural gas to heat buildings is increasing and those emissions are the third largest source in Ontario, contributing approximately 24 per cent of the provincial total.

Lysyk said the energy ministry also doesn't have a long-term energy plan that aligns with the province's 2030 emissions targets. The ministry hasn't required the Ontario Energy Board to develop an updated natural gas conservation framework, the report said.

"This means conservation efforts will likely remain at current levels, and opportunities for further emissions reductions may be missed," the report said.

Lysyk said her findings could mean the province needs to re-assess its emissions plan and its targets.

"I think they need to update the plan to be somewhat practical in what's being communicated to the public," she said.

In another audit, Lysyk said her office found numerous instances of the province not following the rules under its own Environmental Bill of Rights.

The legislation, created in 1993, enshrines the province's responsibility to the environment and citizen's participation in decision-making.

Lysyk said that in many cases ministries are not providing enough time for consultation on legislation or not posting environmentally significant proposals publicly at all.

"Given that the Environmental Bill of Rights has been with us for 26 years, the level of non-compliance by ministries is surprising," Lysyk said. "We strongly encourage the ministries to be more diligent in this regard."

Environment Minister Jeff Yurek defended the government's record of complying with the Environmental Bill of Rights, and said the province remains committed to its greenhouse gas reduction targets.

"It's a difficult path," he said. "We're not the the province with the largest reductions, but we're in the top four of reducing emissions, and we have a long way to go."

NDP environment critic Peter Tabuns slammed the government for failing to live up to its commitments to address climate change.

"When it comes to its climate actions, (the government) is not delivering what it needs to deliver and doesn't have the mechanisms to deliver it," he said. "Frankly, a very, very disturbing picture has been painted (by the report)."

"The auditor general's report is a total and complete rebuke of the Ford government's plans to pave over the beautiful places we love in their made-to-fail climate plan," he said.