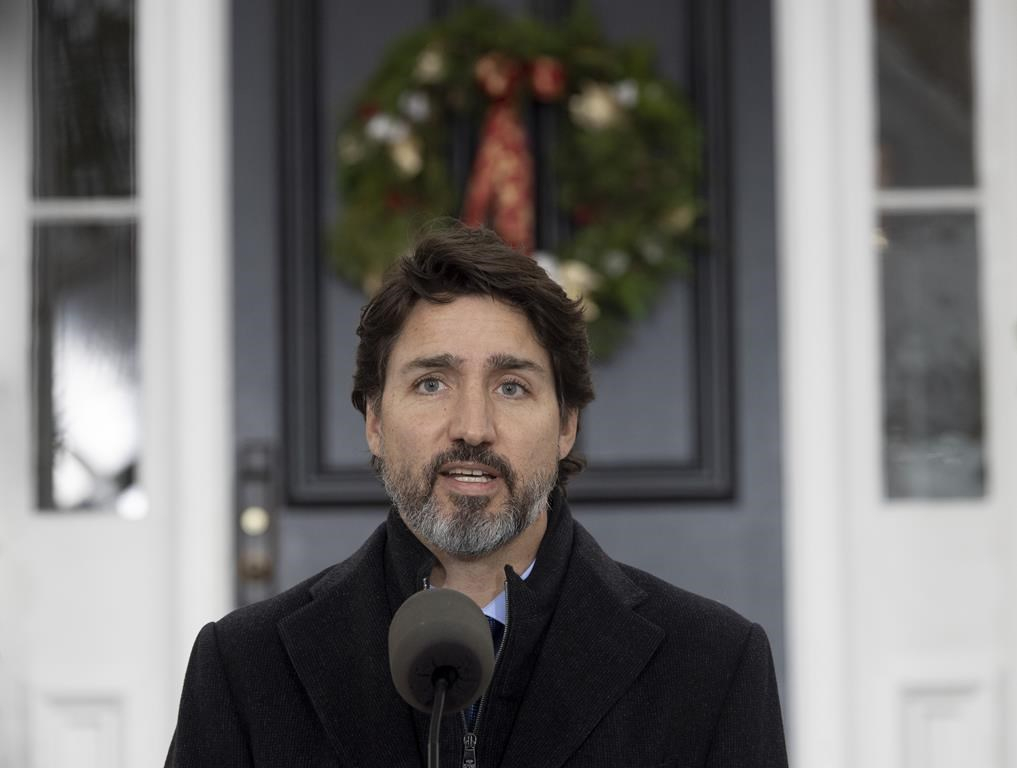 Prime Minister Justin Trudeau is warning that Canada’s future hangs in the balance if people don’t reduce their contacts to prevent dire new COVID-19 projections from becoming a reality.

While Ontario is moving two hot spots into a lockdown stage to try to stave off such a scenario, Quebec wavered on the question of whether exceptions should be made in the name of the holiday spirit.

Trudeau summoned his full powers of persuasion on Friday to bring home the stakes of federal forecasts predicting that Canada is on track to see tens of thousands of new COVID-19 cases per day if there isn’t a severe reduction in socialization.

He urged Canadians to reverse the grave trajectory by staying home and strictly limiting contacts during a news conference outside his home at Rideau Cottage, the site of the prime minister’s daily briefings during the first wave of the pandemic last spring.

After weeks of similar calls, Trudeau warned that if Canadians don’t take immediate action, the consequences may be felt for generations to come.

If Canadians increase their contact rates going into the holiday season, COVID-19 cases could skyrocket to 60,000 per day by the end of the year, according to the updated projections.

That would be a twelvefold increase from the current level of around 5,000 cases per day, which is already putting pressure on health-care systems in some regions.

At current rates of contact, officials predict that Canada is headed toward a surge of more than 20,000 cases per day by the end of December.

Trudeau said closures may be necessary to slow the spread of the virus in some regions, pledging his government’s commitment to helping businesses shoulder lost revenues.

"Doing things to protect people’s health is the best way to minimize lasting damage to the economy," Trudeau said.

"Going into lockdown and supporting businesses ... is a better way of ensuring their success in a few months, in a few years, than trying to tough (it out) through a virus that is running around unchecked."

NDP Leader Jagmeet Singh said the Liberal government’s appeals for people to just stay home ring hollow without more support for those who have no choice but to leave their homes to work, often in essential occupations.

Meanwhile, Ontario is moving Toronto and the neighbouring Peel Region into lockdown in an effort to curtail rampant community spread.

Starting Monday, indoor gatherings will be restricted to members of the same household in the two regions, which have reported the highest number of daily cases for weeks. Authorities are also asking residents to avoid leaving the house for non-essential reasons.

Other strictures include limiting non-essential retailers to curbside pickup, banning indoor dining at restaurants and bars and capacity limits at grocery stores, pharmacies and big-box retailers.

Premier Doug Ford, who has been reluctant to impose measures that would stymie businesses, said urgent action was necessary to avoid a projected spike in infections that could overwhelm intensive care units and lead to greater loss of life.

Ontario reported 1,418 new cases of COVID-19 on Friday, along with eight new deaths related to the virus.

Manitoba’s chief public health officer echoed federal pleas for people to stay home as much as possible as the province reported 437 new cases on Friday.

Dr. Brent Roussin said further restrictions could be imposed if conditions don’t improve in Steinbach, a city of 16,000 people southeast of Winnipeg, where the test positivity rate has been roughly 40 per cent over the last 10 days. A local hospital reported it had to triage patients in their cars because there was no room inside.

Manitoba has already faced a series of tightening rules as the province has jumped to the top of the country’s per-capita infection rate.

And while the province remains in partial lockdown, Premier Francois Legault has dangled the prospect that he may lift restrictions on gatherings for four days — between Dec. 24 and Dec. 27 — so people can spend Christmas with their families.

But public health officials said on Friday that Quebecers will only be able to firm up their plans for the holidays on Dec. 17, cautioning that recommendations could change depending on the status of the outbreak.

Also on Friday, Canada’s chief public health officer urged individuals and public health authorities to do everything in their power to bring infection rates down to manageable levels.

Dr. Theresa Tam underscored the urgent need for Canadians to minimize their contacts, warning that if socialization rises above current levels, Canada could be careening toward a worst-case scenario.

"Absolutely do not go above what we have now," Tam told reporters. "Otherwise, we’re really in trouble."

The strain on the health-care system is already showing in some regions, said Tam, with some hospitals postponing important medical procedures and intensive care units reaching near or full capacity.

Tam pointed to western European countries confronting COVID-19 resurgences as a cautionary tale of where Canada could be heading, and what it will take to douse the wildfire spread of the virus.

Countries such as France and Belgium are starting to curb massive case increases and surging hospitalizations after closing non-essential businesses and limiting outings, said Tam.

Currently, Tam said an average of 4,800 COVID-19 cases are being reported daily — an increase of about 15 per cent from last week.

Easy for him to say. Has he

Easy for him to say. Has he made it easier for poor families? If not he's just doing cynical politics.