Ford lashes out at anti-lockdown protesters outside his house, begs them to stop 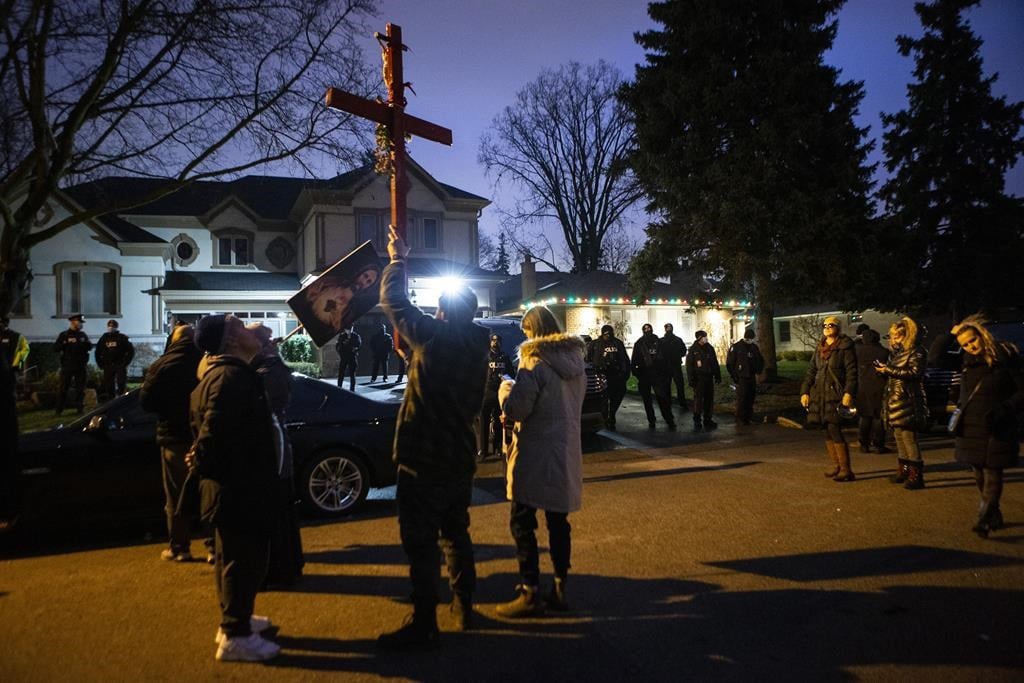 TORONTO — An angry Premier Doug Ford lashed out on Friday at anti-lockdown protesters outside his home, accusing them of intimidating nearby residents and saying their actions wouldn’t sway him.

His neighbours, Ford said in offering them a sincere apology for getting caught up in the situation, make no government decisions and never signed up to be targets.

"Stop acting like a bunch of buffoons out there and start respecting the people of Ontario," Ford said at his daily briefing. "This is totally unacceptable that my neighbours are being intimidated, being threatened, and these people, they need to stop."

Protesters opposed to measures aimed at curbing the lethal spread of COVID-19 have gathered outside the premier’s west-end Toronto home daily. Their actions, he said, are unacceptable.

"You want to protest me, come down to Queen’s Park," Ford said. "You can do cartwheels, you can jump up and down."

Hillier’s supporters took to social media to denounce the citation and restrictions as unnecessary. Ford, however, said it’s unfathomable that some people believe the coronavirus disease to be a hoax when in fact the virus is so serious.

"Look at the states to the south of us that want to ignore the regulations — they’re blowing up," he said. "They have mobile morgues driving around in Texas collecting bodies. If that’s not a wake-up call, I don’t know what is."

Ford defended the restrictions that have shut down many businesses and limited gatherings as public health authorities urged people to stay home except for essential reasons. The measures, he said, were proven effective earlier this year.

"The proof is in the pudding: When we did it last time, we were down to almost 100 cases, which is unheard of in a population of 14.77 million people."

"You want to protest me, come down to Queen’s Park," Ontario Premier Doug Ford said to anti-lockdown protesters outside his home. "You can do cartwheels, you can jump up and down."  #COVID19

The protesters outside his house, Ford said, were special interest and political groups. Small business owners on his street and elsewhere in the neighbourhood were among those anti-lockdown protests end up hurting, he added.

Ultimately, Ford said, the protesters were violating the very tenets of political discourse.

Don't worry, Douggie! We'll keep the protests going at Queen's Park and at Dundas Square, too.

The thing is, with your COVID19 overreach, you have brought the fight into our homes, our churches, our businesses, in fact every aspect of our human interactions is under your nonsensical and unlawful orders.

If you don't like hearing our voice in your home, then stay the **** out of ours.

Really? I thought the

Really? I thought the lockdown was just about the only thing Ford got right.

Then why not move to

Then why not move to communist China? You'd fit right in.

I will stay and fight to retain the liberty that my ancestors fought to defend.