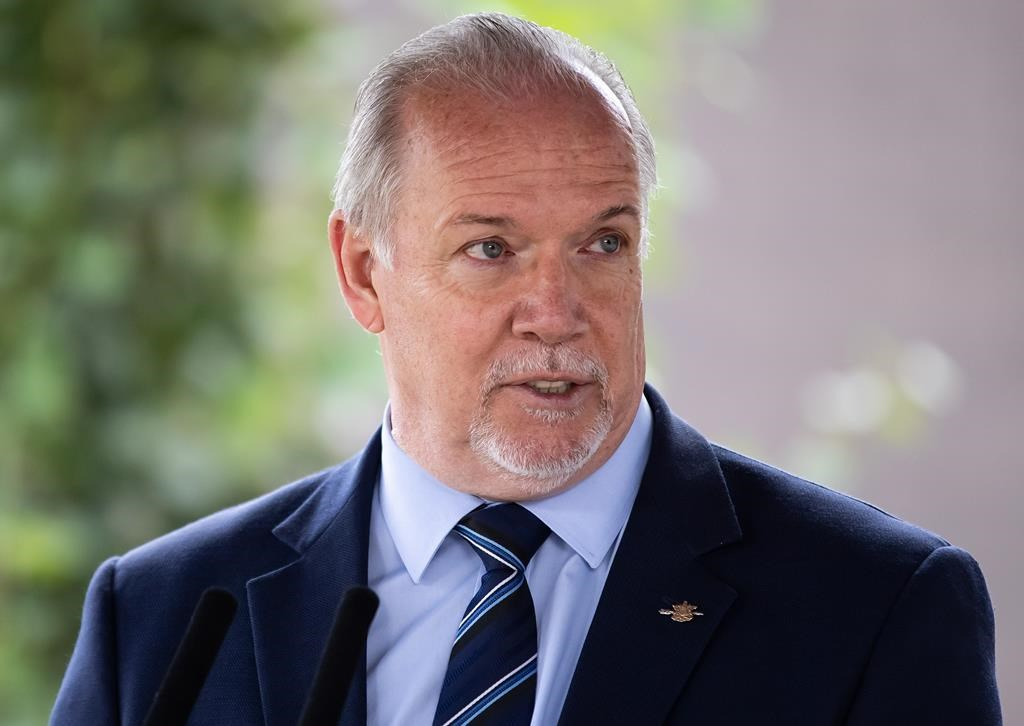 B.C. Premier John Horgan's new cabinet relies on some familiar faces in key positions with Adrian Dix remaining in health and David Eby at attorney general, but he appointed new finance and education ministers Thursday in an expanded inner circle that will focus on keeping people safe through the pandemic.

Selina Robinson, the former minister of municipal affairs and housing, was named finance minister, replacing Carole James, who did not seek re-election last month due to health reasons.

Horgan said his government will rely on a variety of ministers in the fight against COVID-19 and to steer the province's economic recovery efforts. But Dix, Robinson and Ravi Kahlon, who was appointed jobs, economic recovery and innovation minister, will carry many of the pandemic duties.

Khalon is taking on "an enormous responsibility" and will be responsible for the province's recovery plan announced in September, Horgan told a news conference.

"Ravi will be the point person and I'm confident that he is going to make sure everything we can do will be done," Horgan said.

Horgan had similar praise for Robinson, saying her work ethic is unprecedented and she's well known across B.C. from her work as the municipal affairs and housing minister. She is also a former city council member in Coquitlam.

"I have tremendous trust in her capacity," he said. "I gave her an awful lot to do on the housing file, on the municipal affairs file. Her understanding of the people of B.C. is unmatched."

James will continue to work with Horgan as a special adviser, taking a post that pays $1 a year, Horgan said.

Newcomer Jennifer Whiteside, a former official with the Hospital Employees' Union who ran for the New Democrats in New Westminster, was named education minister, replacing Rob Fleming, who was moved to the transportation portfolio.

Horgan says his 57-member caucus will be engaged in the government's decision making either as parliamentary secretaries or through new government caucus committees that have been put in place. He described the cabinet as "a diverse and dynamic team."

The NDP won a majority government in last month's election, capturing 57 of the 87 seats in the legislature.

The new cabinet includes 20 ministers and four ministers of state. Horgan named 12 men and 12 women to cabinet posts, who are supported by 13 parliamentary secretaries.

The premier kept some of his most senior ministers in their previous cabinet posts, including Mike Farnworth as solicitor general and Harry Bains as labour minister. Eby was given the added responsibility of housing.

Three former MPs were handed cabinet posts, with Murray Rankin being named Indigenous relations and reconciliation minister; Nathan Cullen as minister of state for lands, natural resource operations; and Sheila Malcolmson, who served in the last legislature after leaving federal politics, becoming the minister of mental health and addictions.

Among the newcomers to cabinet are Mitzi Dean at children and family development; former Tofino mayor Josie Osbourne at municipal affairs; and Nicholas Simons at social development and poverty reduction.

The swearing-in ceremony was different because of the pandemic. Horgan was with Lt.-Gov. Janet Austin at the University of Victoria for the ceremony, while all the cabinet ministers, except Eby who was at the university, were sworn in through video links.

People across B.C. are struggling with the burdens of the pandemic, now in its ninth month, Horgan said.

"But we are buoyed by the good news of vaccines on the way, but until then, we have to continue to do our level best to keep the second wave of COVID-19 under control and prepare for the new year."

Horgan has recalled the legislature for a brief session with a throne speech on Dec. 7.