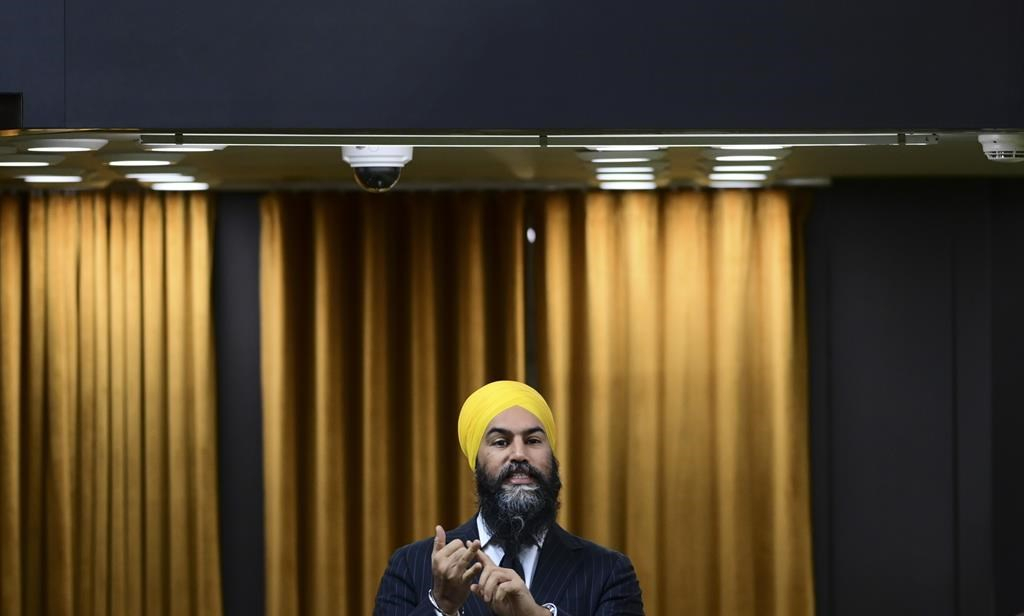 NDP Leader Jagmeet Singh asks a question during question period in the House of Commons on Parliament Hill, in Ottawa, Thursday, Nov. 26, 2020. File photo by The Canadian Press/Sean Kilpatrick
Previous story
Next story

Jagmeet Singh committed a grisly slaying in front of Alexandria Ocasio-Cortez on Friday night. Fortunately, the victim was a video game character, not a human being.

The NDP leader squared off against the firebrand member of Congress in "Among Us," a popular online multiplayer game, as a way to reach young people where they hang.

Between galactic missions carried out by stubby, spacesuit-clad avatars, Singh and Ocasio-Cortez extolled the importance of universal pharmacare, political civility, a living wage and rehabilitation over punishment.

"Another world is not only possible, but it exists. And in so many places in the U.S. it exists, like, a three-hour drive away from people who are saying it’s impossible," said Ocasio-Cortez, referring to cheap health care and more generous employment insurance north of the border.

Legislators have an obligation to connect with younger Canadians struggling to cope with the pandemic, said Singh, who had challenged the U.S. representative over Twitter on Thursday.

"I think it’s a great way to reach out to young people who have been really hard-hit by COVID-19, who often get blamed. But they’re the ones that are working in the jobs that expose them — in service jobs, in retail jobs, in restaurants and bars," Singh said in a phone interview.

"Also they’re the ones who lost their jobs because these are the sectors that have been impacted by the shutdown," he added.

"It’s really hard to physically distance when you don’t have a career settled and you’re still going to school or you haven’t found a partner."

Singh said he and AOC, as the congresswoman from New York is known, share progressive values on health care, economic equality and climate change, views that align with a growing slice of younger voters.

Ocasio-Cortez livestreamed her debut on "Among Us" last month in an effort to lure young adults to the polls for the Nov. 3 election in the U.S., attracting a staggering 439,000 viewers.

Jagmeet Singh committed a grisly slaying in front of Alexandria Ocasio-Cortez on Friday, November 2, 2020 night. Fortunately, the victim was a video game character, not a human being. #AOC

Friday's matchup, which streamed on the online gaming site Twitch, started at 7 p.m. eastern time and continued past 10 p.m.

“It’s going to be one of the most epic crossovers in Canadian politics," Singh said hours earlier, despite drawing a more modest 26,000 attendees.

A controversial standard-bearer for left-wing progressive politics, Ocasio-Cortez, 31, was first elected to represent her New York City district in the House of Representatives in 2018.

Since then, she has become one of the most familiar faces on Capitol Hill, part of a progressive wing of the Democratic party that includes former presidential hopefuls Bernie Sanders and Elizabeth Warren.

"Among Us" pits a team of tiny astronauts trying to return to Earth against one of their own, a sneaky saboteur or "impostor" whose objective is to kill off other crew members before they can repair their ship and identify the impostor.

The Friday showdown — "talking together, and figuring out who’s sus and who’s not" — was Singh's first interaction with Ocasio-Cortez outside of posts and direct messages on Twitter, he said.

"If you think about the impostors as the ones that are at the very top exploiting the system or the ultra-wealthy who aren’t paying their fair share ... that’s a pretty cool metaphor."

His teammate also found symbolic significance in the mission.

"Canadian members of Parliament and U.S. members of Congress venting each other into space. What could go wrong?" Ocasio-Cortez tweeted Thursday in response to Singh's invitation.

The match wasn't all fun and games.

“Are you for real? Jagmeet, you just killed her right in front of me," AOC said during gameplay. "He’s so good at this, it’s scary."

“Are you trying to call me out?” Singh asked. "Thought there was solidarity here."

The congresswoman conceded she was "impressed" with his deceptive plea of innocence after he denied perpetrating the grisly act.

Periodically, Singh asked viewers to chime in with typed chants of "YES" to show their enthusiasm for policies such as a wealth tax or "more youth supports," while Ocasio-Cortez lamented "scaremongering around socialism" in the U.S. and "out-there" Fox News coverage.

Ocasio-Cortez's Oct. 20 livestream, which included fellow progressive Rep. Ilhan Omar, was one of the most-viewed events in the nine-year history of Twitch, which has become a popular way for politicians to attract young supporters.

— with files from James McCarten

MMT: Here's a plain-English guide to 'Modern Monetary Theory' and why it's ... US Representative Alexandria Ocasio-Cortez is also a fan.