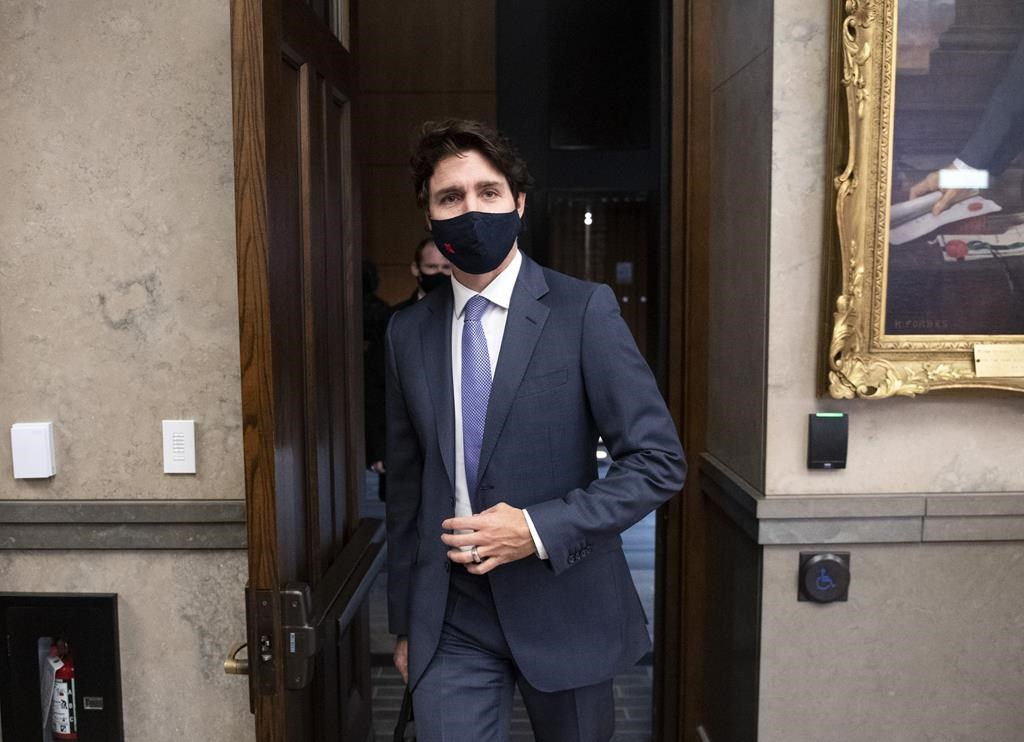 OTTAWA — The Liberals are pushing back against allegations from their political rivals that the federal government has failed Canadians on COVID−19 vaccines, noting Canada was one of the first countries to order doses from several foreign suppliers.

Prime Minister Justin Trudeau admitted last week that other countries with domestic vaccine production are likely to inoculate their citizens first before shipping doses to Canada, which prompted an outcry from the opposition parties.

The Conservatives have also accused the Liberals of having put too much faith in what was ultimately a failed partnership between the National Research Council and a Chinese company to develop a made−in−Canada vaccine.

The Liberal government confirmed in August the deal with CanSino Biologics had fallen apart, after the Chinese government blocked the shipment of doses for clinical trials in Canada. The Tories are now pushing for parliamentary hearings into the arrangement.

On Tuesday, Public Procurement Minister Anita Anand said Canada was one of the first countries to sign a deal with U.S.−based pharmaceutical firm Moderna — and that the company has confirmed it will be one of the first to receive doses of its vaccine.

Anand decried what she described as “misinformation” around vaccines, noting that Moderna “has stated publicly that Canada is at the head of the line for its vaccine doses.”

Canada signed a deal to purchase 56 million doses of vaccine from Moderna on July 24, according to the government. That was 18 days before the U.S. government reached its own agreement with the firm, and months before Britain, the European Union and Japan.

Canada was also the fourth country to finalize a deal with Pfizer after the U.S., Britain and Japan, Anand added, again noting the company has confirmed the timeline. And it was the first country without the ability to mass produce vaccines domestically to ink an agreement with AstraZeneca.

The three vaccines, along with another developed by Johnson &amp; Johnson, are now being reviewed by Health Canada for approval. The government is hoping distribution to Canadians will begin in the first quarter of 2021.

The timing of any vaccine delivery and distribution has become a major question for the government, opposition parties and Canadians who have been struggling physically, financially and emotionally through nearly nine months of the pandemic.

Anand listed the numerous other measures to ensure Canada is ready to start immunizing people when the vaccines are approved, including the purchase of freezers to store doses and enlisting the military to help with logistics.

Asked exactly when the vaccines will arrive, however, Anand replied: “It is not possible to circle a single date on a calendar.” She went on to suggest the question has become politicized, but that safety will trump any political considerations.

Opposition parties continued to demand more information from the government while repeating past allegations that the Liberals dragged their feet on vaccines.

"There’s no question that other countries landed priority on vaccines ahead of Canada while Trudeau was dithering and spinning his wheels in the middle of last summer," Conservative finance critic Pierre Poilievre said Tuesday.

The Conservatives also pushed to probe the deal with CanSino at the House of Commons industry committee.

The Tories want more information about a $44−million project to upgrade a National Research Council facility in Montreal as part of that arrangement, and how the deal with CanSino might have affected the timely procurement of vaccines from elsewhere.

Bloc Québécois Leader Yves−Francois Blanchet appeared to suggest the Liberals should have used emergency laws in the spring to taking existing technology from elsewhere and put it to use for Canada, dealing with the intellectual property issue after the fact.

Governments across the country are also figuring out who will be immunized first.

Canada’s chief public health officer Dr. Theresa Tam said that according to what the science suggests about who is most at risk from COVID−19, the initial round of vaccines should go to those in high−risk situations such as hospitals and care homes. The next batch, she added, should be done by age, with the oldest at the front of the line.

Trudeau declined to get into specifics, including whether he should be one of the first inoculated, saying he is “going to trust experts to make the right determination of what the priority populations are.”

Meanwhile, the prime minister said the federal government is stepping up assistance in two northern communities that are struggling with COVID−19.

The Canadian Red Cross is sending specialists to the predominantly Inuit community of Arviat in Nunavut, which has seen dozens of cases, while the Canadian Rangers are also being deployed to the Hatchet Lake First Nation in northern Saskatchewan.

The moves come as provinces reported thousands of new cases across the country on Tuesday, along with dozens of deaths.

Manitoba Premier Brian Pallister said restrictions on public gatherings and business openings in the province, where the daily rise in cases has levelled off after a spike last month, could remain into the winter as the health−care system continues to strain.

The province also said it handed out 100 tickets to people not following public health orders last week, after setting strict limits on public gatherings and require non−essential businesses to close.

A mandatory−mask order was also implemented for all indoor, public spaces in Yukon as Premier Sandy Silver reported eight new cases in the territory over the past week. That brings the total number to 47 since the start of the pandemic.

This report by The Canadian Press was first published Dec. 1, 2020.

—With files from Beth Leighton in Vancouver, Steve Lambert in Winnipeg, Mia Rabson in Ottawa and Kevin Bissett in Fredericton.

The criticism regarding the

The criticism regarding the Pfizer and Moderna vaccines is, to my understanding, quite unjustified because they are using genetic RNA technology, a technique that, as the Globe's Andrew Coyne put it, is "five minutes old." Not many nations have explored this avenue yet, including Canada. But it does have experience and capability with standard vaccine research and technology.

Trudeau et al can be blamed for defunding a global pandemic research facility last year and for initially dithering on the contracts with key international pharmacological outfits who are fast tracking all their research capabilities. But they have since acted with forthrightness. They now need to focus on storage and distribution.