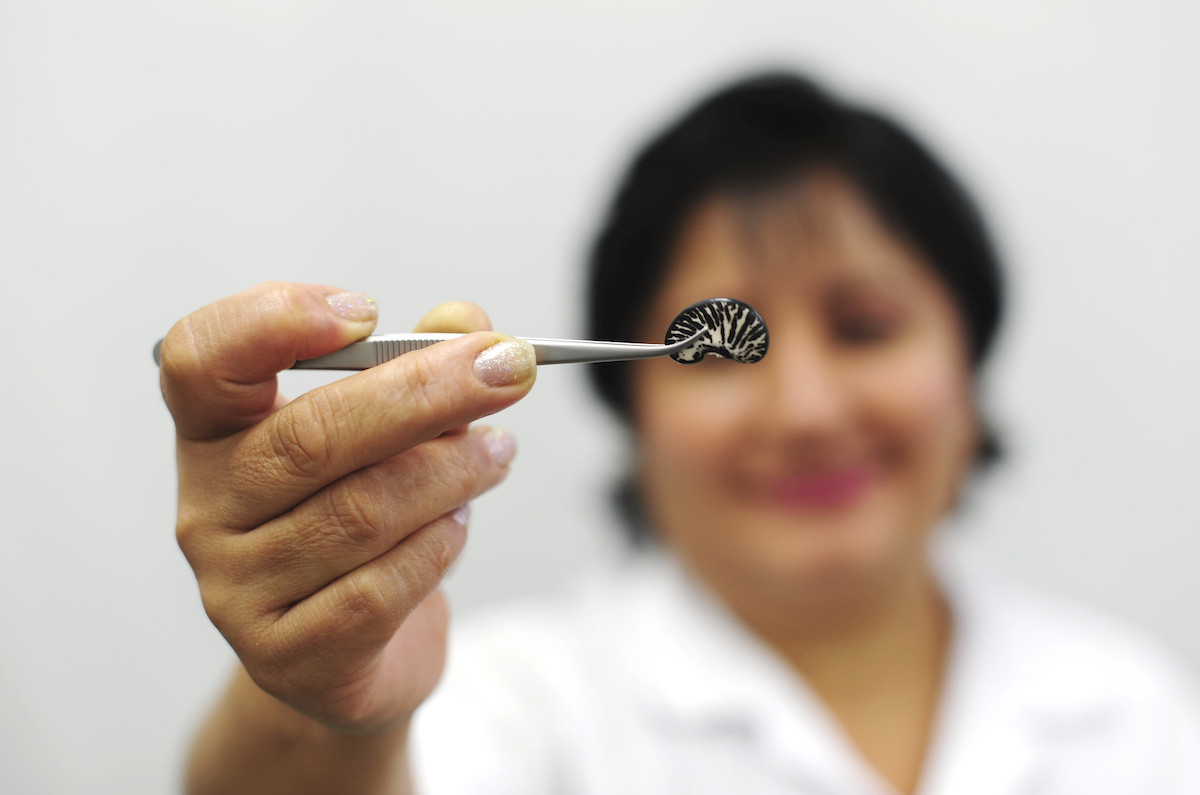 Beans at the CIAT gene bank in Colombia, which has just sent its latest consignments of seeds for conservation at the Global Seed Vault in Svalbard, Norway. Photo credit ©2011CIAT/NeilPalmer via CIAT/Flickr (CC BY-SA 2.0)
Previous story
Next story

In 2014, the remaining staff of the International Center for Agricultural Research in the Dry Areas, or ICARDA, fled their beloved gene bank in Tel Hadia, 20 miles south of Aleppo. Syria’s civil war, which had broken out three years earlier, had finally made the staffing of the facility untenable. But the scientists had already shipped off a resource of incalculable value: the seeds of the most important crops on Earth.

The destination of these little bits of genetic information was the Svalbard Global Seed Vault, a frigid facility sticking out of the permafrost on a remote Arctic island. ICARDA staffers had been among the first to deposit seeds after the vault opened in 2008, stashing away unique varieties of chickpeas, lentils and alfalfa, among many others. They were backing up their own collection, a standard practice among some 1,700 seed gene banks dotted around the world, which are meant to preserve the genes that code our essential crops for resistance to disease, pests and climate change.

Syria’s civil war had been the most dramatic example why you’d want to do such a thing: The treasures inside the ICARDA facility required constant upkeep, and as the war raged on, it became increasingly difficult to tend to them.

Ultimately, the researchers sent three more shipments north between the years 2012 and 2014, before abandoning their own facility. All told, they ended up sending some 116,000 accessions — or seed samples representing a population of plants from a certain location — to chill in Svalbard’s -18 C stacks. Those samples represented 83 per cent of ICARDA’s total holdings at the time of the outbreak of civil war.

The conflict in Syria has not ceased, but by 2015, the ICARDA staff couldn’t wait to restart operations: A gene bank exists to preserve unique seeds, but also to distribute those seeds to researchers and farmers. So they became the first — and remain the only — depositors to make a withdrawal from Svalbard, combing the stacks for tens of thousands of samples and shipping them to new ancillary operations in Morocco and Lebanon. From each sample they took only 300 seeds, and started planting.

“This was a task that really made us not sleep sometimes at night,” says Mariana Yazbek, gene bank manager at ICARDA and a co-author on a recent paper in Nature Plants describing the saga.

After all, they were working with vanishingly few seeds from small samples. If they lost their new crop before it was able to produce more seeds, they’d have wasted that shipment from Svalbard. So they worried about the plants not getting enough rain or facing too many diseases and pests. Crops like wheat and barley dry out in the field as they mature, too.

“What if a fire breaks and you lose the whole season?” Yazbek asks. “So there are a number of external factors that are beyond our control.”

Threatened by Syria’s civil war, scientists in Tel Hadia, 20 miles south of Aleppo, left their beloved gene bank in 2014. But not before shipping off a resource of incalculable value: the seeds of the most important crops on Earth. #biodiversity

But, overall, it worked: Over the past five years, they’ve successfully grown more than 100,000 of their original accessions, shipping 81,000 newly grown samples back to Svalbard to bolster their deposit. They’ve also been shipping the new seeds around the world to those who request them — that could include scientists who want to research a more drought-resistant variety of wheat, or farmers who need the same to subsist on a rapidly warming planet.

This could well make these researchers the stewards of humanity’s future food supply, ensuring the resiliency of dietary staples like barley, wheat and chickpeas, as well as forage crops like clover and alfalfa that are eaten by livestock.

Some 11,000 years ago, the Fertile Crescent birthed humanity’s modern food supply, right where ICARDA has operated for the past 40 years. In a great band of productive soil stretching from modern-day Egypt to the Persian Gulf, people planted roots — figuratively and literally — giving up the hunter-gatherer modus operandi for the settled life of agriculture. They planted wheat and barley in controlled environments, using irrigation and tilling the soil.

With the resulting bounty of food, human populations swelled, requiring still more food. Today, the nearly eight billion people of Earth are dependent on these staple crops, the genetic descendants of those wild varieties, now bred to be even more productive.

These have become our monocrops, vast fields of species like wheat that are great at producing a lot of food, but not great at warding off pests and diseases. That's a problem of genetic diversity — or lack thereof. When our ancestors began selecting the particular wheat plants that produced the most food, they created one-track genetic lines that favoured supercharged production.

Wild wheat dotted across a landscape, on the other hand, is more genetically diverse — that is, different groups of plants are gifted with different traits. Some of them might have the lucky genes that allow them to resist a specific insect or a disease, and survive to pass those genes along. So when a pest or pestilence invades, at least some part of the wheat supply may survive.

But when modern farmers all use the same variety of wheat, the homogeneous crop is more vulnerable to disaster. If the wheat hasn’t been selected to resist whichever specific threat arises, farmers can lose entire harvests.

That’s exactly what’s happening right now with a wheat disease called stem rust, caused by a fungus called Ug99 that’s rapidly spreading across Africa, in large part because it threatens between 80 and 90 per cent of global wheat varieties. But ICARDA provided researchers with wheat accessions that they hoped could be resistant to the disease.

“And yes, they found what they want,” says Ahmed Amri, former head of ICARDA’s genetic resources unit, and now a consultant with the group. (He co-authored the paper with Yazbek.) “And it has launched successful breeding programs to develop varieties that are resistant.”

This is why it’s so critical that ICARDA, or any other gene bank, back up their collections by sending seeds to Svalbard. Some 80 per cent of ICARDA’s seed collection is made up of wild species and landraces — unique varieties of plants developed by farmers in a given region. (ICARDA staffers have actually been able to back up 98 per cent of their collection in 11 other banks around the world, but they decided it would be more efficient to withdraw from Svalbard, which hosts a more complete collection than any of their other individual backups.)

But once you pull seeds out of a bank, the trick is getting them to actually sprout into plants. When planting in Morocco and Lebanon, ICARDA staffers were only working with a handful of seeds from each Svalbard accession. Yazbek and her colleagues began by considering how a particular species reproduces.

Some, like barley, lentils and chickpeas, pollinate themselves to produce seeds. Others cross-pollinate, meaning individuals of the same species can sometimes pollinate each other. But Yazbek and her colleagues don’t want pollinating insects mixing the genetic material from individuals in different accessions.

“So for these, we simply put them in a large isolation cage, preventing pollinators from coming in, and we keep large distances between accessions of the same species,” says Yazbek. Basically, the cage is a prison of fine mesh that keeps bugs out. “This is enough to prevent cross-pollination,” she continues.

But some cross-pollinating plant species are “self-incompatible,” meaning they need pollinators to carry the genetic materials between individuals of the same species. So for these, Yazbek and her colleagues planted samples from the same accession in a smaller cage, then introduced bumblebees, which happily pollinated the plants.

Their success has been extraordinary. At one point, Yazbek stood in a field in which every known type of wild relative of wheat was growing, the spawn of seeds that not long before had chilled in the Svalbard Arctic vault.

“All species are growing in the same field right next to each other. You're talking about between 25 to 30 species,” says Yazbek. “This was an amazing thing to see all this diversity, at the same time, from different countries.”

These are potentially the seeds of scientific breakthroughs. Climate change has already brought fiercer heat waves and more frequent, severe droughts, all of which combine to imperil crops worldwide. And while modern humans have developed crops optimized for productivity, they’re not necessarily designed for climate resilience.

Yet the wild varieties and unique landraces that ICARDA stored away in the Arctic and revived in Morocco and Lebanon are the products of the often harsh conditions of the Fertile Crescent — they’ve already got the genetics to survive on a hot planet.

“The droughts that we are experiencing today — in parts of France or Spain or whatever — have been experienced already in Morocco in the dry areas,” says Amri. “The genes there have been already selected naturally over millions of years to really have those genes of adaptation that will be needed to breed new varieties that will be heat- and drought-tolerant, and disease-resistant.”

This genetic diversity makes the frigid halls of Svalbard a sort of ancient catalog of resilience. “Breeders can tap into some of the diversity that was lost in the domestication process,” says Charlotte Lusty, head of programs and the gene bank platform co-ordinator at the Global Crop Diversity Trust, which helps run the Svalbard Global Seed Vault. She co-authored the paper with Amri and Yazbek.

“Diversity, in a sense, is more relevant to us than ever before,” she says.

“In gene bank distribution, there is more and more call for some of the wild relatives, in the hope that some of the traits, especially against pests and diseases, can be picked up from species that have grown in the wild,” she says.

In the end, the ICARDA researchers’ triumph is not just their own, but one of international co-operation. In 2001, the International Treaty on Plant Genetic Resources for Food and Agriculture, signed by 146 parties including the European Union, united countries in the pursuit of agricultural biodiversity.

“Before we had that international agreement, there was a lot of distrust between countries, and a lot of this ‘We should go it alone’ kind of attitude,” says Ola Westengen, who previously co-ordinated the Svalbard vault and is now at the Norwegian University of Life Sciences. He was also a co-author on the paper.

“So you had a situation where a lot of unique seed or genetic diversity was sitting in only one gene bank in one country — and then, of course, being very vulnerable if something happened to that particular gene bank,” Westengen continues.

The opening of Svalbard changed all that. Now gene banks the world over share a common repository, a sort of fail-safe against a catastrophe like Syria’s civil war. Last year, Westengen went to Morocco and stood in that field of wheat grown from seed that had journeyed thousands of miles from home and (nearly) back, all crops that could help humanity weather the chaos of climate change.

“It was quite emotional, actually,” he says, “to be there and see these seeds that had been sitting in boxes in Svalbard, were now growing out there in the field.”

How crowdsourcing seeds can help farmers adapt to climate change