Speaker Rota and the virtual Parliament 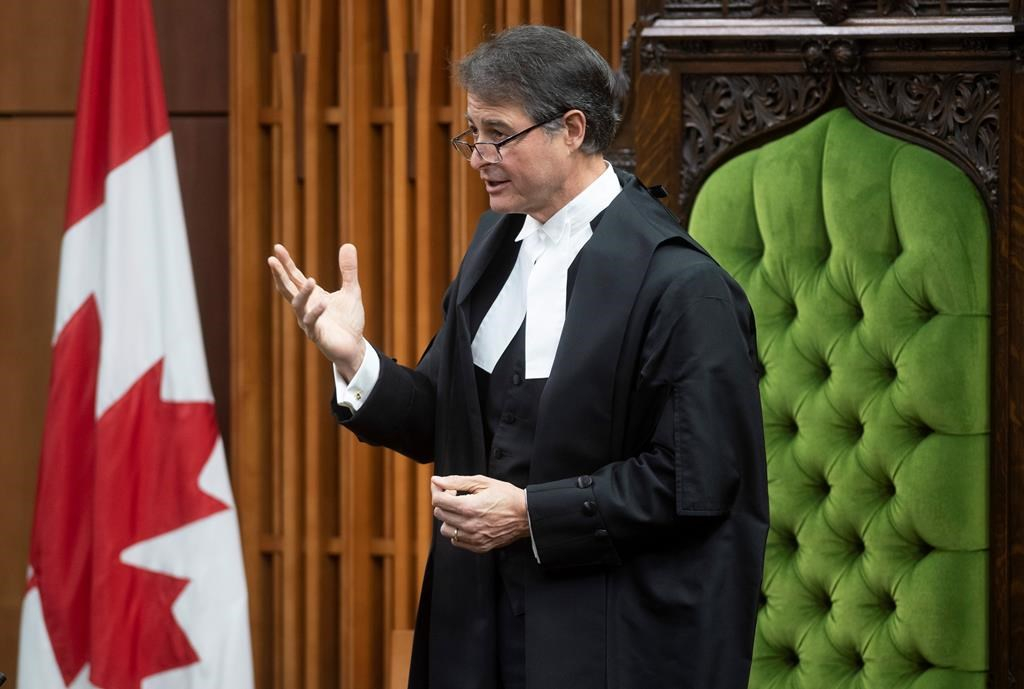 Anthony Rota is marking his first anniversary as Speaker of the House of Commons by, as he puts it, having his throat slit.

He's having surgery this coming week to remove his thyroid gland, which was damaged by radiation treatment he received almost 35 years ago for the first of two bouts of Hodgkin lymphoma.

But it seems a perversely fitting conclusion to a tumultuous year in which Rota has presided over Canada's first-ever pandemic Parliament.

He has been forced to oversee an unprecedented overhaul of Commons operations to allow for hybrid sittings, with some 80-odd MPs in the chamber and the other 250 or so MPs participating virtually and voting remotely.

"It's not what I signed up for but it is what it is," Rota said in an interview.

Rota's debut as Speaker was always bound to be a baptism by fire, riding herd on a Commons in which the governing Liberals hold only a minority of seats — a surefire recipe for hyper partisanship and cliffhanger confidence votes.

But no one could have imagined all the normal operations of the chamber would be upended by the advent of the deadly COVID-19 pandemic in mid-March.

These days, when he sits in the Speaker's chair, Rota has to pay attention not just to the MPs sitting physically distanced from one another in the chamber but to three different computer screens. They show him how much time the current speaker has left, who's up next, and the names of all 338 MPs who signal him with a little, blue "raised hand" feature when they want to talk.

He has to repeatedly remind MPs to mute or unmute, speak louder, activate their cameras and adjust their headsets so interpreters can hear them properly. He's had to chide MPs for using partisan backdrops or displaying props (in one case, a dog in an MP's lap), or being improperly attired while speaking or voting online.

He's even had to instruct MPs driving in their cars to pull over before voting.

"One of the things you've got to remember too is we really did start from scratch and we were in uncharted territory so we didn't really know how things were going to go," Rota said.

Fortunately, Rota has always been a tech geek. Even in high school, he was building electronic devices and fooling around with computers before they were "in vogue."

"I just enjoy the challenge … My interest in technology is something that has made this (pandemic Parliament) interesting," he said.

Rota credits the Commons' IT team, which he says worked night and day, for pulling off what has been a remarkably smooth transition to hybrid sittings, despite some glitches.

Liberal and opposition MPs alike believe Rota's fascination with new technologies has made him ideally suited to the role of Speaker in these unprecedented times.

They also praise his calm, good-humoured and patient approach to refereeing proceedings in what most seem to feel is a non-partisan manner, even though he's a veteran Liberal. He has represented the northern Ontario riding of Nipissing-Timiskaming since 2004, except for a four-year hiatus after being defeated in the 2011 election.

Conservative House leader Gerard Deltell declined to comment on how Rota has managed the Speaker's job. But the House leaders for all other parties in the Commons were unstinting in their praise.

"It is a complex task to establish a virtual Parliament," Bloc House leader Alain Therrien told The Canadian Press.

"The challenges were numerous and we were able to find in Mr. Rota a collaborator anxious to implement effective solutions to the problems that we encountered. In all my interactions with Mr. Rota, I have dealt with a man of great kindness, fairness and respect."

NDP House leader Peter Julian said it normally takes a new Speaker a year or two to become "seasoned," a task infinitely more complicated for Rota because he had to simultaneously deal with a minority Parliament in the midst of a "once-in-a-century pandemic."

"I think Anthony just basically got thrown into the deep end … You would think that that would have been an impossible hill to climb but he's done it admirably."

Julian said Rota's ability to remain affable and "very, very calm" has helped all MPs cope with the intensity of the pandemic and minority Parliament.

Similarly, veteran Green MP Elizabeth May said Rota is a "lovely person" who has been "a calming influence when things are out of control." He can be firm when necessary but is gentle when he chides MPs for bad behaviour and rarely loses his temper, she said.

Rota was elected Speaker one year ago, largely because the Conservatives threw their votes behind him in a bid to defeat the previous Speaker, Liberal MP Geoff Regan, whom they considered overly partisan.

Despite the partisan machinations that won him the job, May said: "Against the odds, Anthony has managed to maintain what I think is being accepted by all sides of the House as a non-partisan hand in all this."

Government House leader Pablo Rodriguez, who used to be seat mates with Rota back when the Liberals were in opposition, said Rota has never been particularly partisan.

"He's a gentleman. He's likable. It's hard not to like him. Again, he's not partisan. That's why he has the respect of everyone on both sides of the House," Rodriguez said.

"He's a great human being and that reflects in the way he treats people and how he's able to motivate people just by being who he is."

This report by The Canadian Press was first published Dec. 5, 2020.

House of Commons first virtual vote had a bumpy start