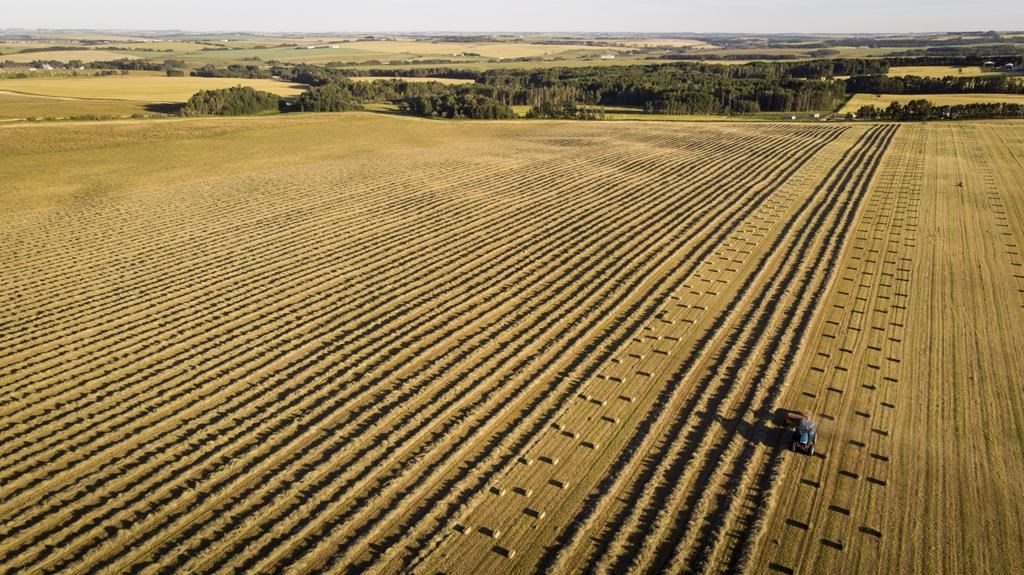 A farmer harvests her hay on a farm near Cremona, Alta., on Sunday, Aug. 16, 2020. File photo by The Canadian Press/Jeff McIntosh
Previous story
Next story

Federal scientists are predicting a hot, dry and fiery future for the Prairies.

"In a warming climate, you can expect extreme weather events to occur with increased severity," said Dave Sauchyn, a professor at the University of Regina and a lead author in an extensive report released Monday by Natural Resources Canada.

It's the first in an expected series rounding up the latest research on climate change and its impacts and applying that to different regions of the country.

The Prairies report begins with a warning that the West is warming the quickest of any area in southern Canada and that those effects are already being seen.

"In winter, much of Western Canada is warming at three times the global rate," Sauchyn said.

The look of the West can be expected to change.

The report says southern grasslands and central parklands will spread north. The boreal forest will shrink and some alpine ecosystems are likely to disappear entirely. Aspen trees are already growing 200 metres higher up mountain slopes as they take advantage of that vanishing habitat.

Overall precipitation is likely to increase, but only in the spring and fall, leading to shoulder-season floods and summer droughts.

"Almost none of the future scenarios include sufficient increases in precipitation to compensate for the drying effect of warmer temperatures," the report says.

"The worst-case future scenario for the Prairie provinces is the reoccurrence of consecutive years of severe drought, such as those that occurred in the 1930s."

Some impacts are already here in the form of extreme weather events.

Federal scientists are predicting a hot, dry and fiery future for the #Prairies. #ClimateChange #climatecrisis

The report says 13 of the 20 most costly weather-related disasters since 1983, when record-keeping began, happened on the Prairies. Recent research suggests climate change has increased the risk of extreme fires in Western Canada by a factor of between 1.5 and 6.

"These events occurred with somewhat greater severity because they were occurring in a warmer climate," Sauchyn said.

The figures don't tell the whole story. Droughts, which don't show up in tallies of insured losses, have cost billions of dollars in lost or unplanted crops.

In years with adequate rainfall, some crops are predicted to do well under climate change.

Spring wheat, the biggest crop in the West, could see yields increase anywhere from eight to 37 per cent in the next 50 years, depending on action against greenhouse gases. Canola, the second biggest crop, would be likely to decline by about the same amount.

Water management is going to become a critical issue, especially in the southern plains.

"There is some response (from governments), but it's more of a reaction," Sauchyn said. "What we advocate is more proactive, more of a planning approach."

He suggested governments should be cautious of new, water-intensive industries planned for southern watersheds, such as the renewed push for coal mining in southern Alberta.

"Any kind of development has to be viewed through a climate change lens," Sauchyn said.

"It just seems due diligence these days that any kind of a proposal be evaluated for its climate risks. If I was a shareholder in a mining company, I would want to know if there's sufficient water in the future."

Wild winter in store for Canada this year: Weather Network