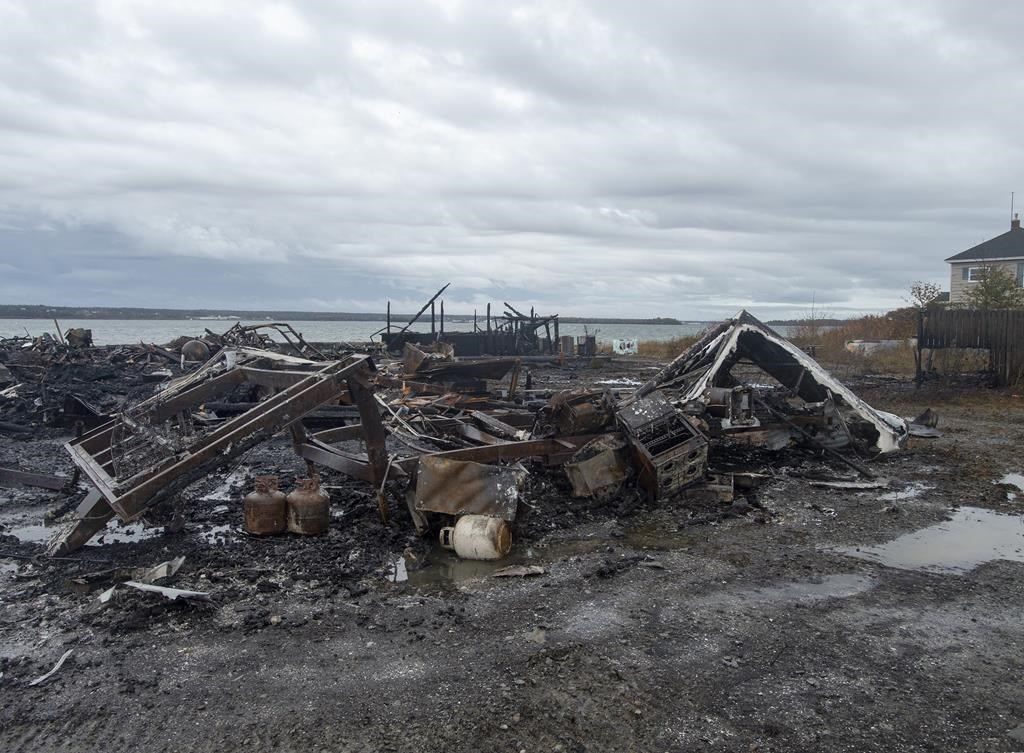 Debris from a burnt-out fish plant is scattered along the shore in Middle West Pubnico, N.S., on Saturday, Oct. 17, 2020. THE CANADIAN PRESS /Andrew Vaughan
Previous story
Next story

MIDDLE WEST PUBNICO, N.S. — The Nova Scotia RCMP confirmed Friday the arrest of 21 people in recent weeks as they continue to investigate a violent confrontation at a lobster pound at the centre of a dispute over a self-regulated Indigenous fishery.

On the night of Oct. 13, about 200 mostly non-Indigenous fishermen and their supporters converged on the facility in Middle West Pubnico, N.S., which was storing lobster caught outside of the federally regulated fishing season by members of the Sipekne’katik First Nation.

Photos posted on social media showed lobster strewn about the facility, and the RCMP said the large group had prevented employees from leaving the building, which was damaged by the crowd.

One suspect was later charged with arson after a van was set on fire outside the building.

The pound was burned to the ground early on Oct. 17.

The First Nation says its people have the constitutionally protected treaty right to fish where and when they want, based on a 1999 Supreme Court of Canada decision that affirmed their right fish for a "moderate livelihood."

However, non-Indigenous fishers have pointed to a second ruling from the court that says the fishery is subject to federal regulation to ensure conservation of the resource.

On Friday, the Mounties issued a brief statement with photos, saying they were seeking public’s help in identifying suspects who engaged in criminal activity. The grainy photos show several men, some of them holding flashlights as they reach into a crate filled with lobster.

The RCMP say no charges have been laid since the 21 arrests were announced.

RCMP Sgt. Andrew Joyce said the arrests were made some time between the confrontation in Middle West Pubnico and this week. He said charges will be laid and more arrests are expected.

Nova Scotia RCMP faced criticism earlier this year from Indigenous leaders who accused officers of standing by while two lobster pounds were vandalized and the catches were destroyed. #NovaScotia #Mikmaq #treatyrights

The vandalism at the lobster pound on Oct. 13 followed a similar incident five hours earlier at a lobster pound about 100 kilometres away in New Edinburgh, N.S., which was also ransacked.

At the time, the RCMP faced criticism from Indigenous leaders who accused officers of standing by while the two pounds were vandalized and the lobster catches were destroyed.

The RCMP, however, argued that when a "handful" of officers were dispatched to deal with two angry mobs, the priority was "preservation of life" rather than making arrests.

A man was later arrested for allegedly assaulting Sipekne’katik Chief Mike Sack after a large crowd gathered at the New Edinburgh lobster pound on Oct. 14.

On Nov. 14, the RCMP announced that a 74-year-old Nova Scotia man from Digby County had been charged with two counts of assault, both unrelated to Sack’s case.

On Nov. 30, the RCMP said an Indigenous band councillor had been charged with unsafe operation of a vessel following a Sept. 20 incident on St. Marys Bay, where the self-regulated Indigenous lobster fishery opened on Sept. 17.

As well, a 26-year-old fisher from Yarmouth County was charged with the same offence in relation to an Oct. 12 incident on St. Marys Bay. And a 42-year-old man was charged with disobeying an interim injunction prohibiting interference with the First Nation’s fishery.

On Dec. 4, the Mounties said a 49-year-old Nova Scotia man had been charged with assaulting a woman on Oct. 14 in New Edinburgh.