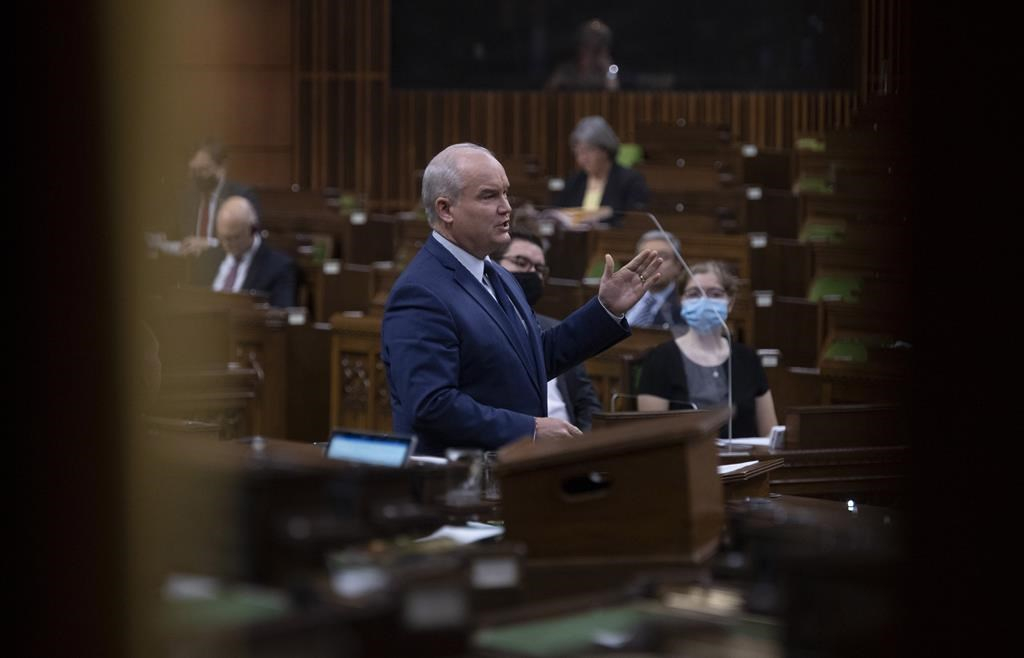 Leader of the Opposition Erin O'Toole rises during Question Period in the House of Commons, in Ottawa, on Tuesday, Dec. 8, 2020. File photo by The Canadian Press/Adrian Wyld
Previous story
Next story

A bill to expand access to medical assistance in dying was approved Thursday by the House of Commons after the Conservatives ended a days-long filibuster.

Bill C-7 passed by a vote of 212-107, with the support of all but four Liberals — two of whom voted against and two of whom abstained — and all Bloc Québécois, New Democrat and Green MPs.

Nearly all Conservative MPs voted against the bill, including Leader Erin O'Toole. Just 15 supported it and one abstained.

Independent MP Jody Wilson-Raybould also voted against the proposed changes to the current law, which she introduced as the Liberals' justice minister in 2016.

The Senate, where opinion on the bill is deeply divided, now has just one week to deal with it before a court-imposed deadline of Dec. 18.

The Conservatives spent four days putting up speaker after speaker to debate the bill at third reading, after similarly dragging out debate on the justice committee's report on the bill.

As a result, passage of the bill Thursday came almost two weeks later than the government had planned and it remains to be seen whether the Senate can whip the bill through all stages of its legislative process in just one week.

"It certainly would have been better had this bill been there (in the Senate) earlier. There's absolutely no question about that and the Conservatives will have to answer for that," Justice Minister David Lametti said after the vote.

"It is difficult, I understand, but certainly not impossible."

Still, Lametti acknowledged he's "definitely worried" that some Conservative senators will drag out proceedings in the upper house, just as their caucus colleagues did in the Commons.

And should the Senate amend the bill in any substantive way, Lametti conceded it's "a fair point" that it would have to come back to the Commons where MPs would likely demand more lengthy debate.

The Commons is scheduled to break Friday until late January but could be recalled if necessary.

The upper house is not expected to begin second reading debate on the bill until Monday. If senators vote to approve the bill in principle, it must then go to the Senate's legal and constitutional affairs committee.

The committee last week conducted a pre-study of the bill, hearing from numerous witnesses, in a bid to help expedite the bill's passage through the Senate. But it may yet call more witnesses and must still give the bill clause-by-clause scrutiny and consider proposed amendments.

And then it must be debated and voted on again by senators in the chamber as a whole.

Some Conservative senators have echoed the concerns of their caucus colleagues in the Commons that the bill ignores the vehement opposition to the bill by disability rights groups, who fear it sends a message that life with a disability is not worth living.

But other senators, including some Conservatives, have argued the bill is unconstitutional because it is still too restrictive and, in particular, because it would expressly prohibit assisted dying for anyone suffering solely from a mental illness.

The bill is intended to bring the law into compliance with a Quebec Superior Court ruling last fall, which struck down a provision allowing medical assistance in dying only to those whose natural death is reasonably foreseeable.

It would drop the near-death requirement but set out two sets of eligibility criteria, making it easier for those near death to receive an assisted death but setting up more restrictive conditions for those who are not.

If the bill is not passed by next Friday, Lametti warned it will create a legal void in Quebec, in which people who are not near death will be allowed to receive an assisted death without any of the safeguards that Bill C-7 would have imposed.

As well, he said medical practitioners in the province will have no certainty as to whether they were acting legally in providing the procedure.

Moreover, he said all intolerably suffering Canadians who are near death would lose the benefit of the more relaxed rules proposed by the bill.

"These kinds of voids are very serious and so I'm very worried and I'm asking senators to really put their shoulders to the wheel in good faith and let's try to get this across the finish line."

Conservatives prepared to talk out the clock on assisted dying bill: O'Toole