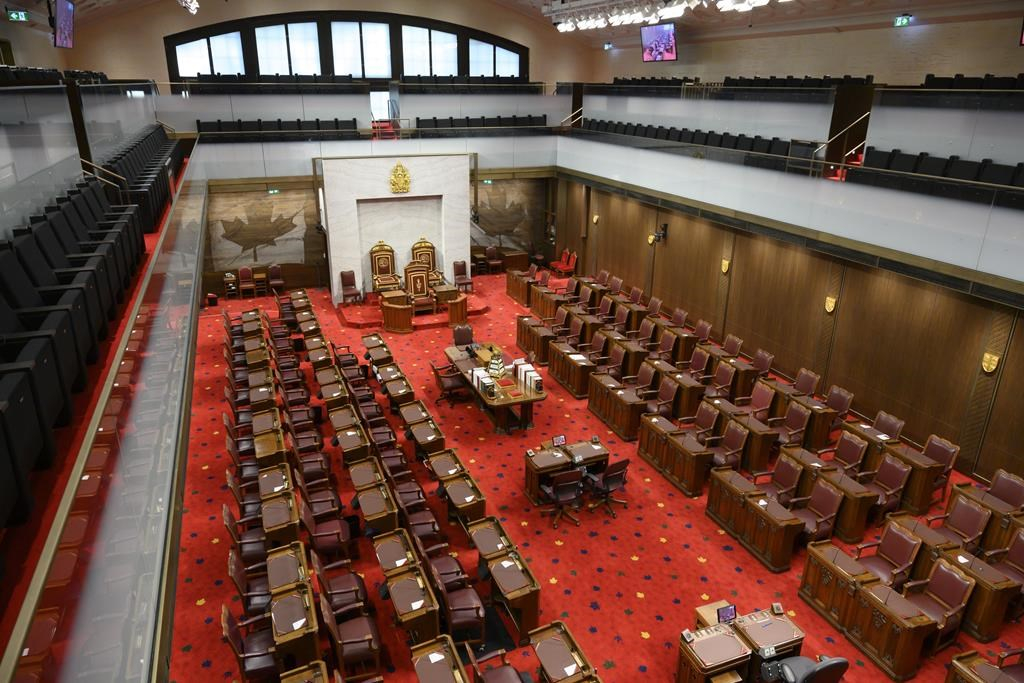 The Senate of Canada building and Senate Chamber are pictured in Ottawa on Monday, Feb. 18, 2019. File photo by The Canadian Press/Sean Kilpatrick
Previous story
Next story

The government's representative in the Senate concedes it's possible that a bill to expand access to medically assisted dying may be struck down as unconstitutional by the courts.

But while parliamentarians must be guided by court rulings, Sen. Marc Gold argued Tuesday they also have a duty to try to balance competing rights and interests.

In Bill C-7, he contended, the government has struck a "reasonable and responsible balance" between the autonomy of intolerably suffering Canadians who are not near death and the need to protect the most vulnerable individuals.

Gold, a former constitutional law professor, gave a lengthy speech in the Senate devoted almost entirely to the constitutionality of the bill. He noted that some senators believe the bill is unconstitutional because it is too permissive, others because it's too restrictive.

"I understand very well that there are very good arguments on both sides of many of these issues," he told the Senate.

Gold said court challenges to the constitutional validity of Bill C-7 are "inescapable" but it's impossible to predict how the courts might rule on it.

"For better and for worse, the courts will continue to be seized with this issue as individuals and groups seek to vindicate their constitutional rights, however they conceive them," he said.

"But this cannot be a reason for government and for Parliament to abdicate their responsibilities to legislate in good faith and in the best interests of Canadians."

Bill C-7 is intended to bring the law into compliance with a September 2019 Quebec Superior Court ruling, which struck down the provision that allows MAID only for those whose natural death is reasonably foreseeable.

The bill would scrap the near-death requirement but would retain the concept to create two eligibility tracks for MAID: somewhat relaxed rules for people who are close to death and more stringent rules for those who aren't.

The bill specifically prohibits MAID for people suffering solely from mental illnesses, an exclusion some senators believe is a violation of equality rights. Some also believe the more stringent eligibility rules for people not near the end of life are also unconstitutional.

The government's representative in the Senate concedes it's possible that a bill to expand access to medically #AssistedDying may be struck down as unconstitutional by the courts. #MAID #cdnpoli #cdnlegal

On the other side of the equation, some senators echo the concerns of disability rights groups in contending that the bill is unconstitutional because it singles out people with disabilities as the only ones eligible for MAID when they are not approaching the end of life.

"As any student of the charter (of rights and freedoms) will know, arguments about rights — and especially equality rights — are inherently controversial and predicting how a court might rule is a very risky business," Gold said.

He laid out the government's justification for excluding people suffering solely from mental illness, arguing that the trajectory of their conditions is uncertain and that a desire to die can be a symptom of the illness.

He argued that the exclusion can be justified as a reasonable limit on rights, as allowed under the charter, because it is "neither arbitrary, over-broad or grossly disproportionate."

Still, he acknowledged the possibility that it could be struck down as a violation of equality rights or the right to life, liberty and security of the person, notwithstanding the government's view.

"The government is aware that there are strong constitutional opinions to the contrary and that the arguments against this aspect of C-7 are worthy of serious consideration and debate," Gold said.

"I certainly have wrestled with them, as should we all."

He promised that amendments to improve the bill would be seriously considered by the government.

Sen. Stan Kutcher, a psychiatrist who is a member of the Independent Senators Group, told the Senate that the exclusion of people suffering solely from mental illness is unacceptable and "dehumanizing."

"It perpetuates centuries-long stigmatization of those living with mental disorders as incompetent and incapable beings," he said.

The reasons the government gives for the exclusion apply to people with physical illnesses as well, Kutcher argued, noting that "the presence of a severe and chronic illness is, by itself, an elevated risk factor for suicide."

He promoted the idea of adding a sunset clause, giving time for adequate guidelines to be developed for allowing MAID to people suffering solely from mental illness.

But that was "vehemently opposed" by Conservative Sen. Denise Batters, whose husband, former MP Dave Batters, took his own life after battling depression and anxiety.

"I have seen up close the failures of our mental health system," she said, citing costs, stigma and a lack of resources.

"The answer to those barriers is to fix that system, not to confirm a mentally ill patient's feelings of hopelessness and offer them the lethal means to suicide."

Gold acknowledged the concerns of some senators that people with disabilities can't make a real choice about ending their lives because they're not given adequate access to palliative care or support services.

But while it's important to improve such services, he said that issue falls under provincial jurisdiction and can't be addressed through the Criminal Code.